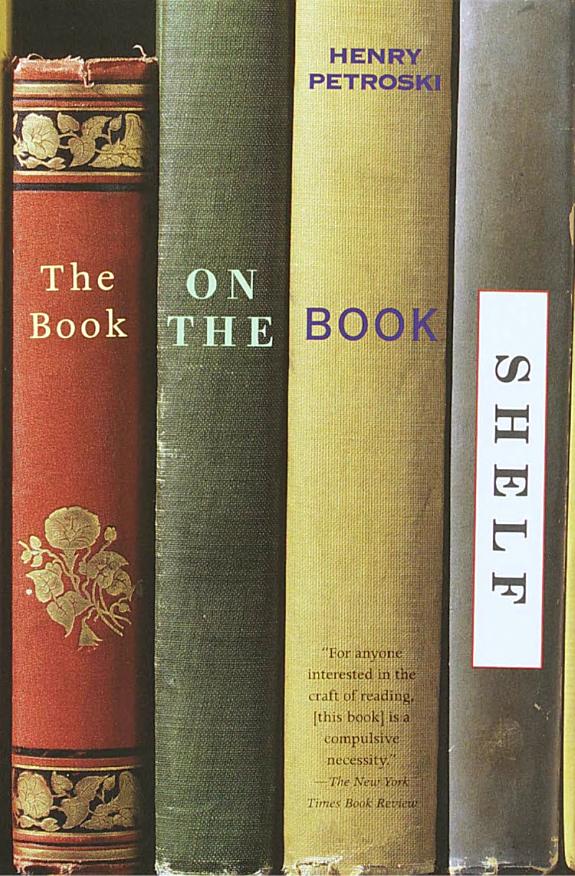 This captivating history (304 pages) was published in September of 2000 by Vintage. The book takes you to a fully-stocked bookshelf. David read The Book on the Bookshelf and loved it; it wouldn't be on our site if he didn't recommend it.

The Book on the Bookshelf

You probably know already if this book is for you, but here are a few more selling points: There are extensive footnotes and charming anecdotes. There’s an appendix that explores in depth the various ways you might arrange your books on the shelf. There are peeks behind the scenes of book storage in some of the largest, most prestigious libraries in the world. Petroski has a sharp eye for detail and is adept at translating research prose that makes you say, ‘Huh! Who knew?’

The story begins with scrolls. Fun fact: Seneca the Younger wrote an unflattering treatise about wealthy people who collected scrolls for show, rather than for study. The history continues through carved tablets and the codex, which was the first instance of a book composed of sheets of paper. There’s talk of illuminated manuscripts and illuminated rooms where ‘windows and natural light were also important because of the fear of fire, and many old libraries were open only as long as the sun was up.’

The author explains the systems for storing millions of books on miles of library shelving and explores the design of the reading rooms at the British Museum and the New York Public Library. You’ll also go inside the personal library of diarist Samuel Pepys who shelved his books by size, discarding an old book whenever he added a new one to maintain his inventory of 3000 volumes.

This is a book geek’s book about books, essential for anyone who loves to read and is curious about how we got from scribbles on a scroll to leather-bound books stacked floor to ceiling.

From the early Middle Ages, some orders have a custom similar to that of the Benedictines, in which the members of each chapter assembled at a predetermined time to return books that had been issued to them during the previous year and to borrow a new book for the coming year. — Henry Petroski