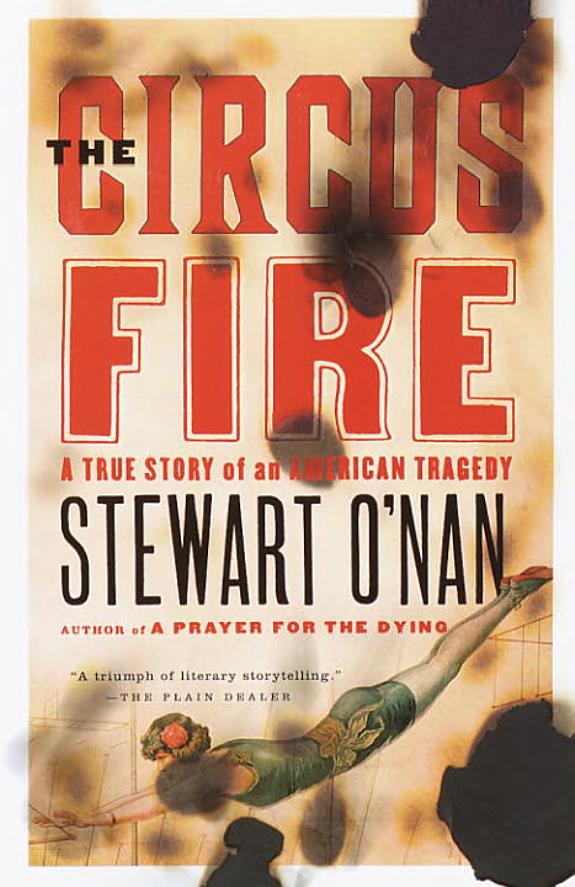 This historical account (384 pages) was published in June of 2001 by Anchor. The book takes you to a tragic circus event. David read The Circus Fire and loved it; it wouldn't be on our site if he didn't recommend it.

A True Story of an American Tragedy

This is a heartrending account — carefully researched and written in achingly evocative prose — of the great Hartford circus fire of 1944. Drawing on interviews with survivors, O’Nan transports us back to a defining story of mid-20th-century tragedy and heroism.

In the middle of the 1900s in America, there as nothing bigger than The Greatest Show on Earth. Ringling Brothers Barnum and Bailey Circus had been touring for decades, and yes, there had been previous fires and other-near disasters, but nothing like what happened on that fateful day in Hartford. As O’Nan explains in his introduction to the book, the circus fire to this day remains both a tragedy and a mystery ‘which keeps it alive and vital in the city’s imagination, an emotional touchstone.’ He continues that he had to write this as a nonfiction account because only fiction could tie up all the loose ends neatly, ‘but then it wouldn’t be true.’

By interviewing hundreds of survivors, O’Nan is able to recreate the events of the day and give us insight into the psychology of the people who experienced them. Emotionally moving and utterly fascinating, it’s a hard-to-read story that’s impossible to put down. There are heroes who put themselves in danger to transport children to safety, and terror-stricken audience members in a mad scramble to exit the burning tent.

That day in 1944, more than 8000 were trapped inside the flaming big top, and this account pays tribute to the tender humanity of the survivors and its victims.

This was still the Greatest Show on Earth, with its tradition and glitter, a new elephant ballet scored by Stravinsky and choreographed by Balanchine, and stars like Emmett Kelly and Alfred Court, the Wallendas and the Cristianis and the Flying Concellos, even menagerie draws like Gargantua the giant gorilla and his bride M’Toto, who did nothing but loll around in their air-conditioned cages until it was time for their twice-a-day staged wedding. One hundred clowns, the posters boasted, one thousand animals. People came to see them and forget about the war, if only for a moment. — Stewart O’Nan