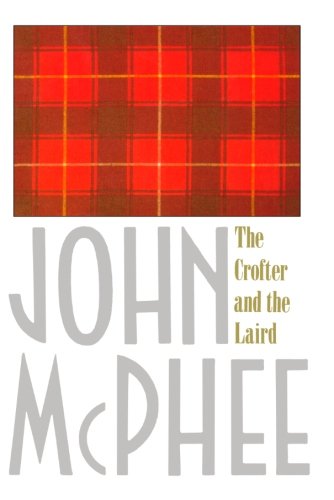 This gripping memoir (176 pages) was published in September of 1992 by Farrar, Straus and Giroux. The book takes you to the Scottish island of Colonsay. David read The Crofter and the Laird and loved it; it wouldn't be on our site if he didn't recommend it.

The Crofter and the Laird

In this vivid memoir, American writer John McPhee turns his eyes and his pen to the small island of Colonsay in the Hebrides, off the west coast of Scotland. The island — still grappling with the feudal system of lords and farmers — is seventeen square miles of damp, descendants, and drama.

McPhee has written 29 books, and he won the Pulitzer Prize in 1999. He’s been the Ferris Professor of Journalism at Princeton University since 1974, and in 2008, he was awarded the George Polk Career Award for his ‘indelible mark on American journalism during his nearly half-century career.’

He’s also a son of the Colonsay McPhees, a family that lived on the island for centuries until they were run out by the MacDonalds.

In 1969, curious about his ancestry and the Hebridean way of life, McPhee packed up his family and ‘went to live for a while on Colonsay.’ That turned into a year-long experience among the 138 people who still work the land on this wind-battered island.

Not much has changed there since the eighteenth century. The small farms known as crofts are stilled owned by the Laird (the lord). In fact, the entire island is the Laird’s property, and the Crofter (farmer) works his plot with no possibility of owning his home, his patch, or his future. This tradition is laid out in the Crofter Holdings Act of 1886. And although Colonsay now has internet access, the day-to-day workings of the town haven’t changed much since McPhee’s visit (or the century before).

It’s a small town like any other — and drastically different than anything that might seem familiar. Separated from the mainland by geography and custom, it’s an incubator for grudges, gossip, and an undeniable dependency on each other. McPhee has an ear for dialogue — you’ll hear the brogue — and his gift for description means you’ll also smell the salt air and feel the bite of the wind as you peek behind the curtains of the islanders’ parlors.

Colonsay is less like a small town than like a large lifeboat. By a scale of things that begins with cities and runs to hamlets, the island is some distance off the end. The usual frictions, gossip, and intense social espionage that characterize life in a small town are so grandly magnified on Colonsay that they sometimes appear in surprising form, in the way that patches of skin magnified a hundred diameters may appear to be landscapes of the moon. Air and water, sea and sky, life is imploded upon the people here by the blue bottles that surround them. Everyone is many things to everyone else and is encountered daily in a dozen guises. Enmeshed together, the people of the island become one another. Friend and enemy dwell in the same skin… Where I come from, a few angry words at a party can separate people for all time, but no amount of enmity could do that on Colonsay, where the sea is close in four directions and where vehicles meet and pass on a road that is eight feet wide. — John McPhee