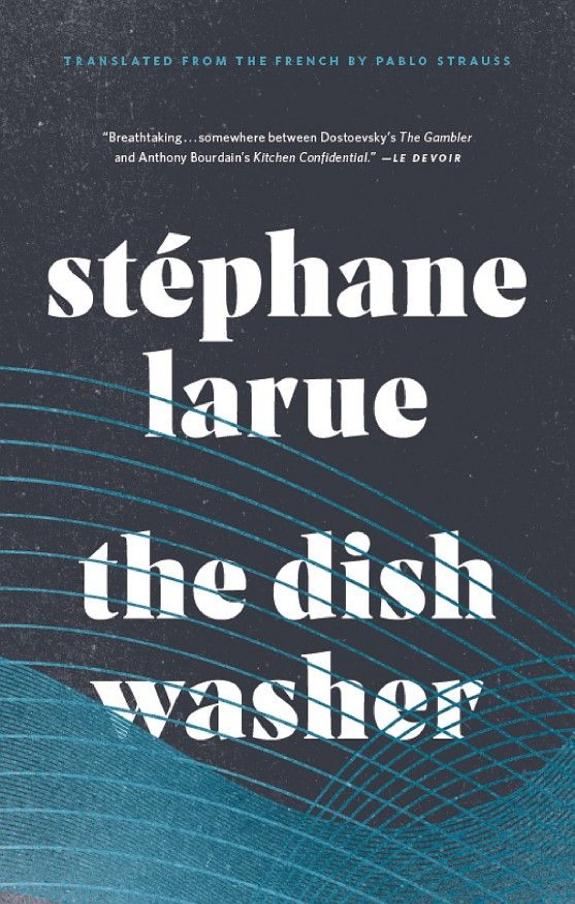 This workplace drama (464 pages) was published in August of 2019 by Biblioasis. The book takes you to an upscale restaurant in Montreal. Melissa read The Dishwasher and loved it; it wouldn't be on our site if she didn't recommend it.

In this lyrical, insightful ode to making mistakes, our would-be hero Stéphane is up to his elbows in dirty dishes and kitchen drama at a high-end restaurant in Montreal. What’s a kid with a penchant for Iron Maiden, Dungeons & Dragons, and video gambling to do?

Stéphane is a talented graphic designer with fresh ideas and a legit heavy metal band for a client. But before he can stop himself, he’s gambled away his first commission and blown the deadline. He’s also lying to his friends, his parents, and himself. Hiding out from the angry band members and desperate to stop his downward spiral, he takes the first job he can find: washing dishes at La Trattoria.

Forget his university classes; Stéphane spends almost every waking hour at the restaurant. He quickly makes enemies and allies in the greasy dish room and kitchen. There’s a sketchy drug dealer, a kindly chef, a purple-haired female cook, and assorted bartenders, managers, busboys, and waitstaff. The close quarters and literal heat of the kitchen make for a charged atmosphere with plenty of flirting, trash talk, and professional rivalries — both on the clock and during booze-soaked after-hours mingling.

To be sure, Stéphane makes some bad choices; it’s almost physically painful to read the passages in which he rides the waves and troughs of his gambling addiction. But you also can’t help but root for him to get it together. Author Stéphane Larue was addicted to gambling in his twenties: ‘The main thing I wanted to do was to tell how it physically acts on you, the same way drugs do. When I see movies (about gambling) there’s often this romanticization — Wow, look, he’s going to risk everything to win it all back! No. That’s not how it works. You play to keep on playing.’

Larue’s prose also vividly conveys the unrelenting noise and aromas in the kitchen, as well as the repetitive, grinding physical effort required to churn out — and clean up from — hundreds of meals a day. The days blur into nights blur into days; the exhaustion and fog of routine becoming almost like a hangover, with the restaurant staff ready for a little hair of the dog at the start of the next shift.

Originally published in French — and beautifully translated into English — it won both the International Prix Senghor and the Prix des Libraires du Québec.

… it made me think of everything I was burning, one twenty-dollar bill at a time. It wasn’t my life that was being burnt; it wasn’t just my body that was subjected to the ravages of my own stupidity. I was burning everything I touched: money, friendships, girls, plans. Deep down, I knew I wouldn’t stop until everything was gone. But I kept right on gambling anyway. — Stéphane Larue