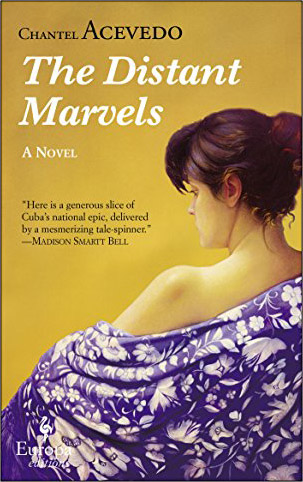 This family saga (304 pages) was published in April of 2015 by Europa Editions. The book takes you to one momentous night in 1960s Cuba. Melissa read The Distant Marvels and loved it; it wouldn't be on our site if she didn't recommend it.

Our heroine Maria Sirena is a natural-born storyteller. She uses her skills as a lectora — a reader — to entertain and inform her co-workers at the cigar factory. But one night, when it seems the world might come to an end, she weaves stories that hold fear at bay.

It’s 1963 in Cuba. Castro has recently seized power, and Hurricane Flora — one of the deadliest storms since Columbus came ashore — is bearing down on the island. A group of women — old, young, optimistic, scared — have been forcibly evacuated from their homes and tucked away together in the former governor’s mansion.

As wind and rain beat against the windows, the evacuees are guarded by another young woman, a soldier in Castro’s army. The tension between this true believer and the townswomen is palpable. To distract from the worry of the rising floodwaters and an uncertain future in this new Cuba, Maria Sirena does what she does best: She tells them the incredible story of her life.

The women, both old friends and new, huddle together as Maria spins the fantastic tale how she was named by a mermaid. She reveals the fierce love between her revolutionary father and her mother Lulu, who fought and dreamed and suffered as ferociously as her husband. She talks openly about the heartbreaks in her own life. As Maria shares her secret sins and regrets, the other women, too, whisper revelations of the kind that emerge only in the unusual companionship found in the middle of the night.

This sweeping family saga is populated by fierce, determined characters. There’s plenty of action in Maria’s swashbuckling tales, along with discussions of the big stuff in life: the love between parents and children, the passion of first romance, the brutality of war, the power of forgiveness, and the tender force of a good story.

I drink the lemonade in sips, in between pauses, as I tell her the story of my birth, of the mermaid that appeared to my mother, claiming me. I tell her that my parents were rebels, and how my father fought in all three wars of independence. I tell her of my connection to this house. I tell her about vengeance, and the tragic life of slaves, and a story about pirate’s gold. — Chantel Acevedo