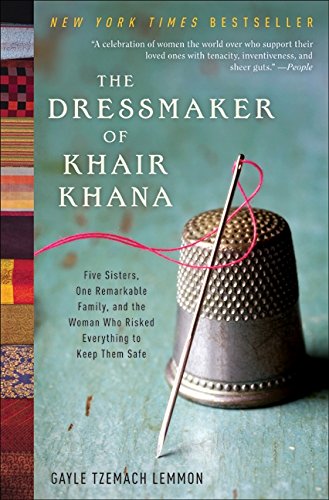 This nonfiction reportage (256 pages) was published in March of 2011 by Harper Perennial. The book takes you to Taliban-ruled Afghanistan. Melissa read The Dressmaker of Khair Khana and loved it; it wouldn't be on our site if she didn't recommend it.

The Dressmaker of Khair Khana

Five Sisters, One Remarkable Family, and the Woman Who Risked Everything to Keep Them Safe

The stories of Taliban control and abuses in Afghanistan are undeniable and objectively terrible. But this solidly researched, engagingly written reportage has a happier tale to tell. Meet Kamila Sidiqi, a young Afghan woman who ran a successful sewing business and school in her home — and right under the Taliban’s nose.

In 1996, Kamila was 19 years old and had just received her teaching degree. She was looking forward to working as a teacher and furthering her own education. But on the same day that she graduated, the Taliban took control of Kabul, and everything changed. Suddenly women were confined to the burka and their homes. Education for women was no longer an option. Simply being out on the street was incredibly dangerous.

And for her family, being at home was no guarantee of safety. Kamila’s father had been a senior officer in the Afghan army. Although he was no longer active, his previous job put them all in danger. So her mother, father, and oldest brother went north — and Kamila was suddenly responsible for her four sisters and younger brother.

She turned her living room into a dress-making studio. In secret, she and her sisters crafted dresses by hand and sold them to shops in the market. Then, when demand outpaced their abilities, they quietly recruited neighborhood women and girls to help. And when these jobs became coveted opportunities, they opened a sewing school to share what they knew. Kamila eventually taught and employed more than 100 women.

It’s an amazing story, very well told. There are lovely ‘oh, isn’t that nice moments’ like the first time one of the new employees sews beads onto a dress. And countless friendships were forged in the sewing room that gave them a place to find sisterhood during a scary time.

These uplifting stories contrast with terribly suspenseful, frightening moments. When it’s potentially deadly for an unchaperoned girl to be caught speaking to a man who is not a relative, every conversation is fraught with danger — for both parties. Gayle Lemmon’s narrative describes a handful of heart-pounding scenes of real danger and suspense.

But ultimately, this is a story of triumph for Kamila and the other women who picked up needle and thread and found independence and empowerment.

Khair Khana, a northern suburb of Kabul, was home to a large community of Tajiks, Afghanistan’s second-largest ethnic group… Kamila hurriedly made her way down the dusty street, holding her scarf over her mouth to keep from inhaling the city’s gritty soot. She passed the narrow grocery store fronts and wooden vegetable carts where peddlers sold carrots and potatoes. Smiling, flower-laden brides and grooms stared down at her from a series of wedding pictures that hung from the wall of a photo shop. From the bakery came the delicious smell of fresh naan bread, followed by a butcher shop where large hunks of dark red meat dangled from steel hooks. As she walked Kamila overheard two shopkeepers trading stories of the day. — Gayle Tzemach Lemmon