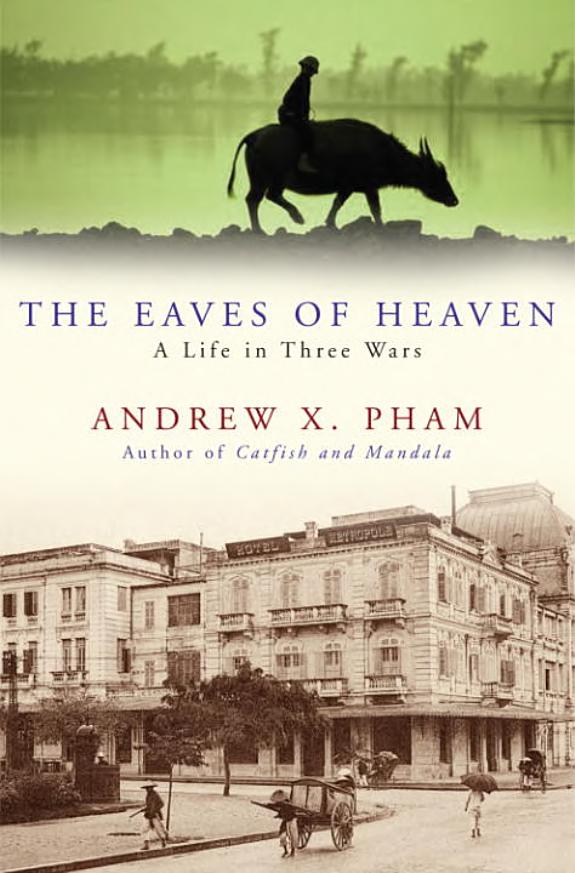 This novelistic biography (320 pages) was published in June of 2008 by Crown. The book takes you to 20th-century Vietnam. David read The Eaves of Heaven and loved it; it wouldn't be on our site if he didn't recommend it.

The Eaves of Heaven

A Life in Three Wars

In this striking book, author Andrew X. Pham gives voice to his father’s memories to create a biography that reads like a memoir. ‘I have lent his life stories my words,’ the author said. ‘The perspectives and sentiments within are his.’

The story begins in 1802 when a Vietnamese war hero is awarded a vast plot of land in North Vietnam in honor of his service. He becomes a feudal lord, complete with a manor house and thousands of peasants to serve him. For five generations, each of the male heirs in his line of succession becomes a bit wealthier than the last.

Until we get to the subject of this book: Thong Pham. His destiny follows a dramatically different path.

Through lyrical prose that uses novelistic tricks to draw us into the historical facts, we trace the events — challenging, tragic, heroic — in this man’s life. He is, by turns and simultaneously, a playboy, an opium addict, a restauranteur, a teacher, a father. A good man in many bad circumstances.

The story unfolds through chapters that alternate between the events of the past and those closer to the present. We flit across time with Thong, and this out-of-order telling reminds us that life so often splices moments of tenderness, love, and celebration into hardships that would otherwise be impossible to bear.

The author’s experience as a travel and food writer shines in his ability to transport us to destinations and times we might never visit in person. You’ll hear the crickets chirping on a summer night and taste the salty reward of fish sauce in his descriptions of Vietnamese meals — even as you might wish to avert your eyes from the horrors of war he describes.

This uniquely lived and told story of Thong Pham’s life reads like a historical fantasy that washed up on the shores of 20th-century Vietnam. It’s affecting, personal, and unforgettable.

[Cha ca is] a northern delicacy we were unlikely to encounter in the South. A waiter brought us two platters of raw sea bass filleted paper-thin and heaps of fresh lettuce, vegetables, pickles, cucumbers, and herbs. The cook followed with a sizzling pan of turmeric and garlic oil. He cooked the fish by pouring the hot oil directly on it… We chopsticked pieces of fish onto sesame crackers and topped them with basil, cilantro, lettuce, purple herbs, and a dab of an ash-coloured sauce made with fermented fish, fish sauce, chili, lime, and garlic. We quenched ourselves with litres of icy beer. — Andrew X. Pham