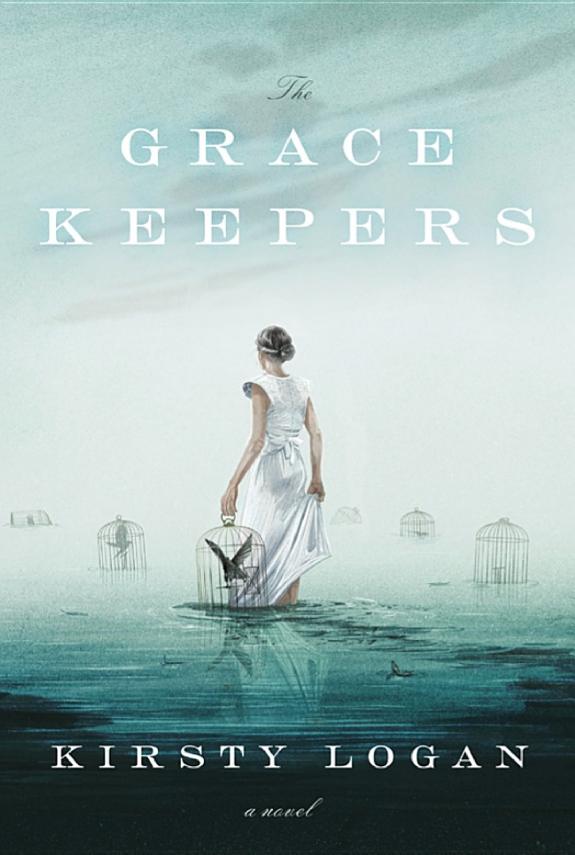 This literary fairy tale (320 pages) was published in May of 2015 by Crown. The book takes you to a circus floating on the sea. Melissa read The Gracekeepers and loved it; it wouldn't be on our site if she didn't recommend it.

In a dreamy world much like our own, the waters of the world have risen and drowned the continents. All that remains are scattered archipelagos, controlled by the military and patrolled by conservative Revivalist ships. And sometimes visited by the dazzling Circus Excalibur.

There’s tension between the privileged few who live on the land — the landlockers — and the rest of the population — the damplings — forced to live on boats, forever afloat and subject to the ebb and flow of the sea. It’s against this dramatic background that the touching, all-too-human drama plays out.

Our heroine is a young girl named North. She tragically lost her parents, and now her closest companion is the trained bear with whom she performs in the circus. But it’s an uneasy alliance. She’s devoted to her bear, but he is a beast, after all.

The found family of the circus is both her haven and a challenge. The personalities of the other performers are as colorful as their costumes, and old resentments — and wishes for a different future — run deep.

We also meet Callanish, a gracekeeper. It’s her job to lay the dead to rest in their watery graves, and she lives in self-exile — surrounded by the birdcages of her graces — after her own family catastrophe.

This atmospheric tale traces the paths of these two women — one in the vibrant world of the circus, the other all alone in the blues and greens of the water — and eventually, they intersect, with results that ripple through the other characters in the story.

The narrative unfurls through lovely prose and gorgeous imagery: a ship’s sails transformed into a circus tent, a ring of delicate birdcages amid the slate-blue ocean, a small girl snuggled into the side of a warm bear. Gauzy and melancholy, this is a story of yearning, grief, regret, and, ultimately, the power of hope and love to redeem us, in even the most fraught circumstances.

‘Behold, the brave and wondrous performers of the Circus Excalibur, marvels of acrobatics and the taming of the most dangerous beasts.’ First came an elegant man… with feathers in his long hair and colored streaks across his cheeks. ‘My son, Ainsel, lord of the horses. Even the most jaded of audiences are struck dumb by the poise and bravery of his horseback skills.’ Next came three uniformly beautiful men, with hair dyed various shades of pink… ‘And here are Teal, Cyan and Mauve, our glamours. They can seduce a crowd of hundreds with their dances around the maypole.’… Jostling up against the pink-haired men came three gangling, shifting women. They had their sleeves rolled up, displaying tattooed designs on their forearms: one gray-shaded bones, as if her insides were outside; one a constellation of pale stars on a blue background; one a mass of color that looked like layers of birds’ wings in flight. — Kirsty Logan

*Kirsty Logan is also the author of one of our favorite stories in the collection Haunted Voices: An Anthology of Gothic Storytelling From Scotland.

Travel with the Circus Excalibur in a Dreamy, Watery World in 'The Gracekeepers'

Immerse yourself in this poignant, dreamy fairy tale about a world that's covered with water. It's a fantasy tethered to our reality with a shimmer of magic, with unforgettable characters on a grand circus adventure.

Every Friday, we share our favorite book- and travel-related links. This week, we've got Jane Austen-related news, a new online comic set in Beirut, a dramatic cliffside hotel in Colombia, Halloween links, and more.