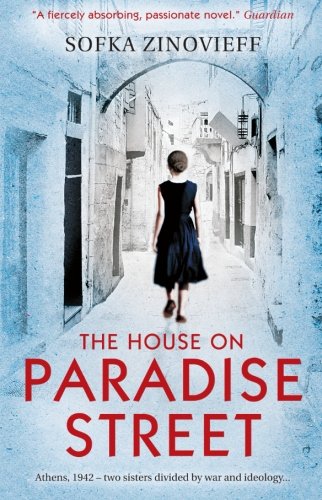 This family saga (384 pages) was published in January of 2013 by Atria Books. The book takes you to Greece, past and present. Melissa read The House on Paradise Street and loved it; it wouldn't be on our site if she didn't recommend it.

The House on Paradise Street

Meet Maud and Aunt Alexandra and Antigone and Nikitas and all the rest of the Perifanis family in modern Athens. When tragedy strikes, everything they think they know about themselves and their history is uprooted. And the healing can begin.

Beginning in 2008 and set against the backdrop of Greece’s turbulent 20th century — WWII, civil war, military junta — this is a family saga full of dramatic strife and lovely, quiet moments. It’s an exploration of the dangerous fallout of secrets and the redemption that comes from forgiveness, even of the messiest members of the family.

The story is not an unfamiliar one: When journalist Nikitas, the patriarch of the Perifanis family, dies in a mysterious car crash, his wife Maud begins to poke around in the secrets she didn’t know he was keeping from her. Soon, his estranged mother has returned from self-imposed exile in Russia to attend his funeral and unknowingly set off family fireworks.

There are surprise Nazis and extra-marital affairs and various people saying things and not saying things that really should have been said (or not) for decades. It’s gloriously messy and heart-rending.

Obviously, this is not the white-and-gold-and-blue Greece of beach vacations and yachting. Instead, it’s a peek inside how Greek families work, even in the modern era, with multiple generations living under one roof and the past living alongside the present like a commemorative ghost.

Author Sofka Zinovieff has a gift for description and will transport you to raucous evenings in the taverna and sunny mornings with the scent of a lemon tree on the breeze. Food, weather, scenery, and conversations are vividly rendered and ring with authenticity.

This might not be the Greece of which dream vacations are made. But it is a trip you’ll be glad to have taken with complex, endearing characters in search of companionship and peace.

The lemon tree dominates our yard. It was planted by Aunt Alexandra’s father in the 1920s, when he built the house, and it now reaches to our first floor windows, the fruit ripening almost all year round. In the spring, the building is flooded with the blossom’s intoxicating scent. The fire escape descends to the courtyard at the back of the house, alongside – almost inside – the tree, so you can reach out to pick a lemon or take a leaf to crush and sniff the citrus tang… I have loved this tree since I first visited Paradise Street and in optimistic moments see it as a common point of reference for the disjointed family that I married into. Our totem. — Sofka Zinovieff