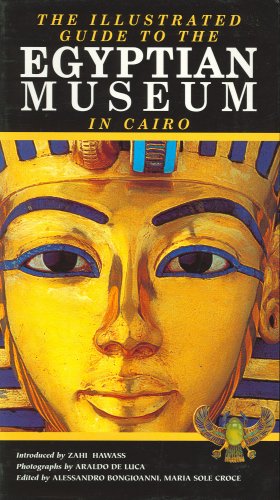 The Illustrated Guide to the Egyptian Museum in Cairo

This 600+ book does a remarkable job of bringing the Egyptian Museum in Cairo into your home. There are photos of antiquities on nearly every page, along with illustrations, floor plans, and engaging text that are like a private tour of this show-stopping museum.

Among the artifacts in the museum are two statues of King Tutankhamun — made of cedarwood and covered with gold — funeral figurines that belonged to the Nubian kings, and sarcophagi as far as the eye can see. The collection also includes larger-than-life statues and tiny bits of everyday life: coins, a piece of cloth, miniature figurines, scraps of notes written in ancient Greek and Latin, colorful hieroglyphics from Arabic and Egyptian scribes, gold jewelry. A bronze statue of a falcon with gold inlays and an elaborate hat is delightful and poignant.

Each item is photographed in full color and accompanied with text that’s charming and soothing. Regarding the falcon: ‘This splendid item made from gold and silver attracts the attention of the museum visitor. The status seems imbued with the mystery of the god-falcon, who is represented with a large sun disk on his head, a proud gaze, and talons solidly set. The difference in color of the metals used for the body and feet gives the creature elegance and lightness. The body is split in two so that it can contain the mummified body of a real falcon.’

Soon this book will be an artifact itself. The Egyptian Museum in Cairo is about to close and will be replaced by The Grand Egyptian Museum, a $1 billion complex that’s just a short distance from the Pyramids of Giza. It will feature the entire treasure of King King Tutankhamun, many of the artifacts will be on display for the first time. One hall of the museum was literally built around a 3200-year-old statue of Ramses that weighs in at 83 tons.

So, for now and for always, this book will be the closest you can get to the treasures and somewhat dusty dignity of the Egyptian Museum in Cairo.

Heads up: You can read this book in its entirety online in the Internet Archive.

At mealtimes, the Egyptians for the most part ate bread and drank beer that were both made at home using water and the flour of spelt or barley. The bread was made in different forms that probably corresponded to different tastes. Left-over soured pastry was used as a yeast and sweetmeats were prepared using honey, dates, carobs, and currants. Beer was made by fermenting bread cooked only on the outside, crumbled, and probably mixed with date juice. These basic foodstuffs were accompanied by various types of vegetables, fruits, and, on occasion, meat or fish. Wine, cider, and cow or goat’s milk were also very popular. — Allessandro Bongioanni