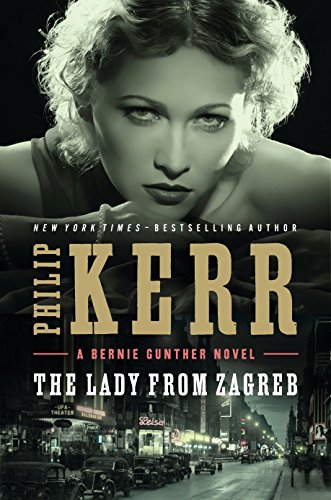 This noir mystery (432 pages) was published in April of 2015 by G.P. Putnam's Sons. The book takes you to WWII Berlin and Yugoslavia. Melissa read The Lady from Zagreb and loved it; it wouldn't be on our site if she didn't recommend it.

The Lady from Zagreb

Philip Kerr is one of the masters of the noir thriller; imagine Raymond Chandler set in WWII Germany. In his antihero Bernie Gunther, he created a character with his own code of ethics, but whom you’d always want in your corner.

Bernie is your classic good man in bad circumstances. He’s a former homicide detective who’s now entrenched in the enemy camp. His beloved hometown of Berlin is infested with Nazis, and Bernie is forced to play along if he wants to live. Watching Bernie eventually rise to the occasion is always a rewarding and pulse-pounding experience.

Even at his lowest points — usually when his life hangs precariously in the balance — Bernie has a wry sense of humor that keeps even the blackest plot points from feeling too dark: ‘On the whole it’s not wise to remind the devil that he’s the devil, especially when we were getting on so well.’

In this 10th adventure with Bernie Gunther (no need to read the series in order), it’s the summer of 1942. Bernie is given an offer he can’t refuse: Joseph Goebbels, the Nazi Minister of Propaganda, orders him to find the father of Dalia Dresner, the glamorous actress and femme fatale.

Bernie’s search takes him to Yugoslavia, where two facts seal his fate: He learns there’s more to the brutality in this volatile country than he realized, and he is hopelessly, desperately, tragically in love.

Dalia picked up her negligee. She didn’t need my help, it wasn’t very heavy. — Philip Kerr