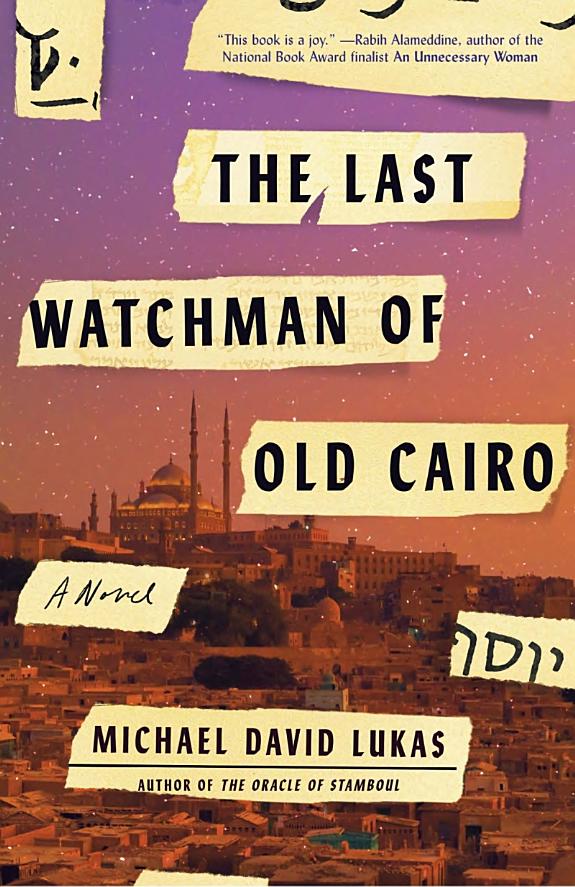 This family saga (288 pages) was published in March of 2018 by Random House. The book takes you to Cairo, Egypt. Melissa read The Last Watchman of Old Cairo and loved it; it wouldn't be on our site if she didn't recommend it.

The Last Watchman of Old Cairo

This enchanting novel has everything you could want in a sun-dappled story about Egypt: A mysterious legacy. Dusty archives. Family secrets. Forbidden love. Unlikely and enduring friendships. If that sounds like your kind of thing, read on.

The tale is woven of threads that represent three slices of the past: the 11th century, 1897, and now. The action kicks off when Joseph al-Raqb receives a package sent on behalf of his recently deceased father. His inheritance is a scrap of paper with indecipherable writing pressed between two panes of glass, accompanied by a letter from a Mr. Mosseri — he does not know a Mr. Mosseri — that reads, ‘Your father asked me to send you this. Please call if you ever find yourself in Cairo.’

He does the only reasonable thing: He takes himself off to Cairo to investigate why his father wanted him to have this ancient-looking fragment. Along the way, we learn more about Joseph’s family history — and the far past that’s now making ripples in the present.

And there’s a lot to unpack: Joseph is the descendant of a long line of Muslim watchmen who guarded the fabled Ibn Ezra Synagogue in Old Cairo. And to understand his story, we need to travel back in time to meet Ali, the first watchman, and British twin sisters with moxie in the 19th century. They’re all knots on a thread that’s connected to a sacred scroll hidden in a secret attic in the synagogue.

The city of Cairo is a character in the story, described with rich details that show how the city has changed (or stayed the same) through the centuries. And we see how Cairo was once a religiously tolerant place where Jews and Muslims lived together, worked together, broke bread together, were friends, and fell in love. It’s a celebration of all kinds of boundary-crossing relationships, including class and gender.

This is the kind of book you’ll want to flip over and start again when you’ve read the last page. There are plenty of mysteries woven into the plot, but the characters are not amateur detectives: They’re curious, well-intentioned people trying valiantly to understand themselves and the people they love. There’s a touch of magical realism about the whole schlemiel and a deep passion for books and learning — with a bit of fairy-tale glitter sprinkled into a family saga. The clincher? It makes dusty documents very romantic.

My father told stories about dragons and djinns, buried treasure, fishermen, and wayward princes. But his best stories were those drawn from our family history, stories about the long line of al-Raqb men who had, for nearly a thousand years, served as watchmen of the Ibn Ezra Synagogue. There was the story of Ahmed al-Raqb, my father’s namesake, who had faced down an angry crowd that believed the Jews were immune to the Great Plague. There was the one about Ibrahim al-Raqb, who convinced the ruthless Mamluk ruler Baybars to accept a fine in lieu of destroying the synagogue. And then, of course, there was the story of Ali al-Raqb, that first and most noble watchman, whose bravery helped to establish our family name. — Michael David Lukas

Shake up your breakfast routine with this savory, comforting recipe from ancient Egypt. Tender fava beans are simmered with fragrant cumin, then dressed up with colorful additions and warm, yeasty pita on the side.