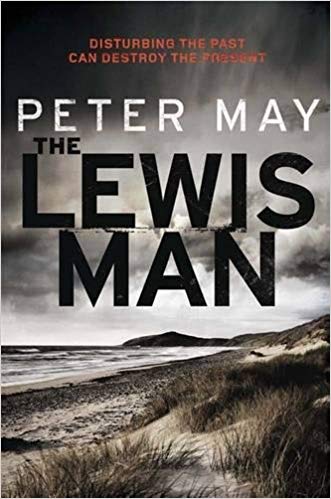 This dark murder mystery novel (384 pages) was published in September of 2014 by Quercus Books. The book takes you to the Isle of Lewis, off the coast of Scotland. Melissa read The Lewis Man and loved it; it wouldn't be on our site if she didn't recommend it.

In Peter May’s Blackhouse trilogy set on the Isle of Lewis, the past creeps into the present like a cold fog rolling in off the sea. Our hero, beleaguered ex-cop Fin Macleod, is trapped in an endless wrestling match between the life he wants and the one he struggles to leave behind.

The action kicks off when a preserved body is found in a peat bog on the island. It’s no ancient relic, but is instead, a fairly modern murder victim etched with stab wounds and an Elvis tattoo.

Fin has ditched his life in Edinburgh — along with his wife and career — to move back to the bleak island of his birth. He plans to restore a decades-old romance as he refurbishes his family’s ancient crofthouse.

But his peace is disrupted by torturous memories and the complications of the murder case. He and his childhood sweetheart are dragged into the investigation, and the tenuous repairs they’ve made on their lives are torn apart by old tensions and new revelations.

The weather and terrain of Fin’s beautiful but unforgiving birthplace is an influential character in this story. Every day on the island is a test of wills between the people and the land, and that creates a certain kind of person. It fosters secrets. It encourages mystery. Slowly, the brutal truths of the previous decades are uncovered, and Fin must fight with all of his heart to protect the people he loves if there’s any chance of a brighter future.

All along the ragged coastline, the sea sucked and frothed and growled, tireless legions of riderless white horses crashing up against the stubborn stone of unyielding black cliffs. — Peter May

This is the second book in The Lewis Trilogy by Peter May. We also recommend The Blackhouse and The Chessmen.