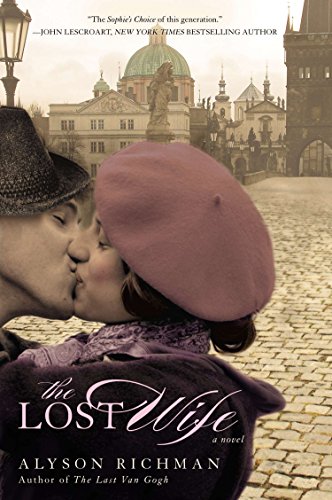 This historical romance and war novel (368 pages) was published in September of 2011 by Berkley. The book takes you to World War II Prague. read The Lost Wife and loved it; it wouldn't be on our site if didn't recommend it.

This story is a war novel. Still, it’s also pretty high on the romance spectrum, a tender love story that examines the various kinds of love that connect us to each other, all played out against the backdrop of World War II.

It starts in Prague when the war has just begun, with a young couple who are desperately in love. It’s their first love — the most delicate, the most engrossing. But they’re Jewish, the approach of the Nazis is inexorable, and heartbreaking choices must be made.

As you probably expect, the two are torn apart. They live entirely separate lives until well into adulthood. Decades later, in New York City, fate carefully places them back in each others’ paths.

The story maybe be a bit predictable, but it’s so well-told — earnest, moving, dramatic, but not melodramatic — you will not care one whit that you can guess where it’s going.

By turns, this tale is grueling, poignant, uplifting, and shocking in its war-related brutality. Ultimately, though, it demonstrates the power of good in the world. That is sweet, indeed.

“We wore that grief like one wears one’s underclothes. An invisible skin, unseen to prying eyes, but knitted to us all the same. We wore it every day.” — Alyson Richman