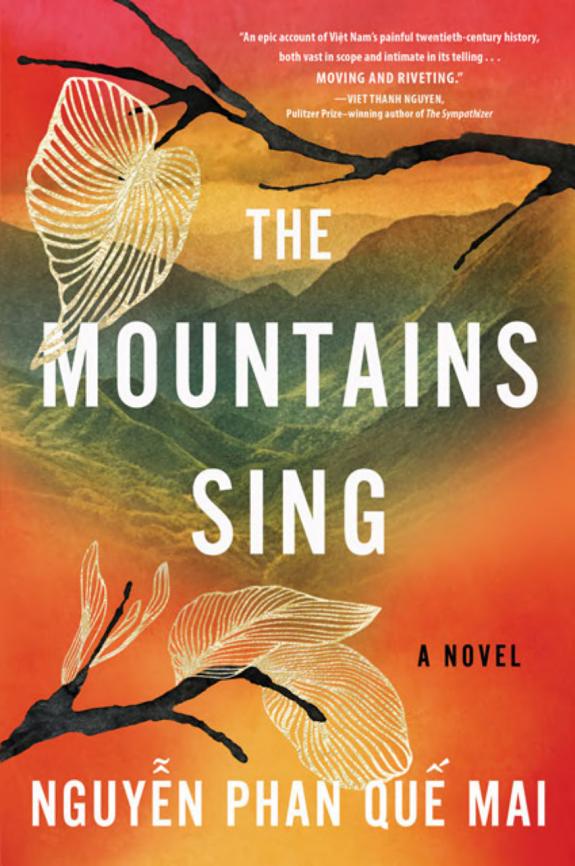 This family saga (352 pages) was published in March of 2020 by Algonquin Books. The book takes you to 20th-century Vietnam. Melissa read The Mountains Sing and loved it; it wouldn't be on our site if she didn't recommend it.

This stirring family saga — tracing four generations of a Vietnamese family — is told through the voices of two unforgettable women: Trần Diệu Lan, a grandmother hardened to burnished steel by the events of the 20th century, and her beloved granddaughter Hương, who’s coming of age during the Vietnam War.

Grandma believes that her life has been cursed by a fortune-teller’s prediction. How else to explain the tragedies that befall her over and over again? The French occupation, the Japanese invasion, the Great Hunger, the Land Reform. Trần Diệu Lan experienced them all and has the emotional scars to prove it. But she survived. And as the Vietnam War rages, Huong realizes that her grandmother and her stories are keeping Huong alive.

It’s these stories — and their impact on Grandma’s family of six children — that slowly unfold for us throughout this riveting narrative. We see the family torn apart by circumstance and choice, suddenly banished from their home, moneyless and friendless, lost to each other, and on opposite sides of the war.

Despite the tragedies suffered by the family, this narrative is infused with hope and empathy. Huong and her grandmother are devoted to each other with a bond that can’t be broken, even by the challenges of wartime. To escape the bleakness of her everyday reality, Huong turns to books, losing herself in Vietnamese poetry and the adventures of Laura Ingalls Wilder, fueling a lifelong commitment to learning and to keeping her heart open.

Author Nguyễn Phan Quế Mai skillfully, gently places her very personal family story against the backdrop of historical events. The war scenes are visceral, the losses keenly felt; conversations thrum with fear, regret, guilt, devotion. Because ultimately, this is a story of survival and love — a tribute to a woman, mother, grandmother who was determined to keep her family together, if not physically, then emotionally and spiritually.

That night and for the next many nights, to dry my tears, Grandma opened the door of her childhood to me. Her stories scooped me up and delivered me to the hilltop of Nghệ An where I could fill my lungs with the fragrance of rice fields, sink my eyes into the Lam River, and become a green dot on the Trường Sơn mountain range. In her stories, I tasted the sweetness of sim berries on my tongue, felt grasshoppers kicking in my hands, and slept in a hammock under a sky woven by shimmering stars. — Nguyễn Phan Quế Mai