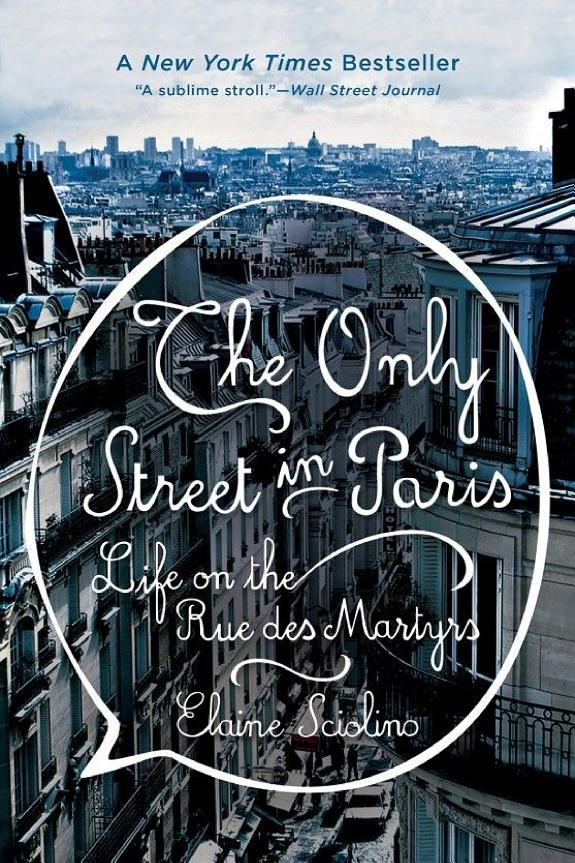 This enthralling memoir (320 pages) was published in November of 2015 by W.W. Norton & Company. The book takes you to modern-day Paris. David read The Only Street in Paris: Life on the Rue des Martyrs and loved it; it wouldn't be on our site if he didn't recommend it.

The Only Street in Paris: Life on the Rue des Martyrs

Welcome to the rue des Martyrs, an ordinary but extraordinary street in Paris. You’ll meet the friendly and opinionated neighbors, the resident ghost, cheesemongers and greengrocers, bookshop owners and a cabaret vamp — and through their stories, fall in love with Paris.

Author Elaine Sciolina is the former Paris Bureau Chief of The New York Times. In a remarkable confluence of traits, she’s both a fantastic writer and good with people. This makes her an astute guide to the idiosyncrasies and special pleasures of life in Paris. The people who populate her neighborhood are opened up to us as readers in a way we could never manage on our own in real life.

Named for the location at which the patron saint of France was beheaded, the rue des Martyrs has a colorful history. Degas and Renoir painted there; Emile Zola set a novel there; François Truffaut filmed there. But that’s all background. What makes this street special today is its representation of the best of Paris: the dusty bookshops, the fight over a fishmonger, the caramels at a chocolate shop that ‘transport those who try them to the coast of Brittany.’

Insightful, evocative, and sweet without sentimentality, this memoir is the best that armchair travel can be. It will transport you immediately to this particular — and somehow, universal – street in Paris. ‘I can never be sad on the rue des Martyrs,’ Sciolino writes, and as you grow to know her neighborhood, you’ll understand why.

The explanation about the martyrs turned out to be a long and complicated tale. The French are obsessed with history, partly out of a genuine affinity for the past, partly from a desire to cling to lost glory. Most people I asked had an answer to the question of how the rue des Martyrs got its name. And if they didn’t have an answer, they had a well-argued theory. The French learn in childhood that constructing a beautiful argument is more important than which side to take. Only the most self-confident confess to ignorance. — Elaine Sciolino