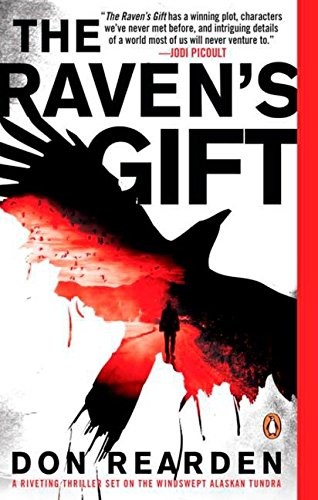 This dystopian adventure novel (296 pages) was published in July of 2012 by Text Publishing. The book takes you to the Alaskan tundra. Melissa read The Raven's Gift and loved it; it wouldn't be on our site if she didn't recommend it.

The story unspools in alternating timelines that reveal John and Anna’s experience acclimating to life in the village, what happened in the village during the epidemic, and the effort to survive after the epidemic hits. Moving around in time this way ratchets up the tension until the full story is revealed.

We know from the first page that something has gone terribly wrong, and when it becomes clear that no one from Outside is going to help them, John sets out on a thousand-mile slog through bitter cold and his own fear to reach help. Even when his attitude is as bleak as the terrain around him, a tiny spark of hope flickers in his chest, driving his feet forward through the snow.

Author Don Rearden grew up on the tundra and rivers of Alaska, and a real-life epidemic in the late 1800s inspired this story. His prose, like the landscape it describes, is painfully beautiful — and he deftly blends elements of adventure, dystopian lit, suspense, and magical realism. His hero John is firmly grounded in the world of the Outsiders, but he’s assisted by native Yup’ik people who bring a touch of mythology and magic.

This is a bracing look at contemporary subsistence culture and the threat of epidemic in a climate where the weather is both an inciting incident and a character in this hero’s journey.