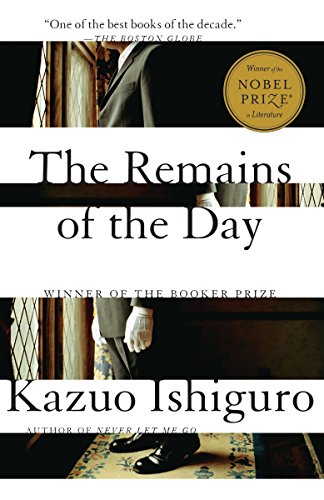 This historical novel (245 pages) was published in July of 1989 by Vintage International. The book takes you to the English countryside. Melissa read The Remains of the Day and loved it; it wouldn't be on our site if she didn't recommend it.

The Remains of the Day

What would you do if you realized the loyalties that had guided your entire life were misplaced?

This novel opens in 1956, and it seems like it’s going to tell the story of a sentimental, post-war road trip with sweet reminiscences and fond memories, gentle countryside, and conversations with convivial locals.

Then it reveals itself to be something more meaningful and heartrending.

Our hero Stevens is an English butler in a stately manor house in the country. He has the very stiffest of stiff upper lips. When he receives a letter from a former member of the household staff, he decides to take a ‘motoring trip’ to Cornwall to visit his old friend.

As he drives, he reflects on how he’s lived his life, and he begins to contemplate a different future.

A relic of the old world manners of the country house, Stevens believes that the way he served humanity was through his service to his ‘great gentleman’ Lord Darlington. Stevens’ life has been molded by dedication, service, and, most importantly, duty. But his memories force him to reconsider the role that Lord Darlington — and by extension, Stevens himself — played in the events leading up to World War II.

In Stevens, Ishiguro has created a character that’s painfully bound by his notions of propriety and blind loyalty. Stevens can’t see that his actions (and inactions) ripple through multiple peoples’ lives, not the least of which is his own. He denies himself love, and in that denial, withholds it from others as well.

This story is framed by the grand issues of WWII, but it’s an intimate look at one man struggling to live by a code that is woefully out of touch with what it means to be human. There are parts of this story that are gut-wrenchingly sad, but the writing is beautiful in its restraint. In the end, it’s difficult to judge Stevens too harshly and impossible to not want the best for him.

They wear their professionalism as a decent gentleman will wear his suit: he will not let ruffians or circumstance tear it off him in the public gaze; he will discard it when, and only when, he wills to do so, and this will invariably be when he is entirely alone. It is, as I say, a matter of ‘dignity.’ — Kazuo Ishiguro