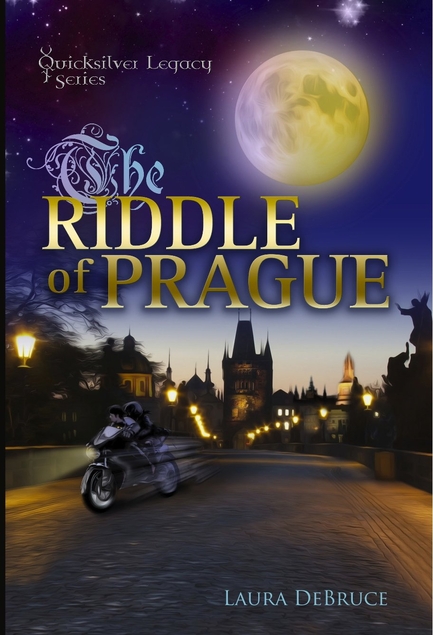 This YA fantasy thriller (212 pages) was published in September of 2013 by CreateSpace. The book takes you to 1990s Prague. Melissa read The Riddle of Prague and loved it; it wouldn't be on our site if she didn't recommend it.

The Riddle of Prague

In this YA thriller with a touch of young love, our heroine is a scrappy 18-year-old who gets caught up in an unexpected and surprisingly dangerous escapade in Prague.

The story begins in 1991 with Hana Silna’s plane ride to the newly democratic Czech Republic. Hers should be a happy mission: She’s on her way to the family homeland to reclaim The Rockery, their ancestral estate. But Hana’s joy is tempered by the fact that she’s traveling alone; her father is dead, and her mother is gravely ill.

What should be an uneventful experience — simply signing documents of ownership — turns into the ordeal of her young life.

She inadvertently discovers a centuries-old mystery, a riddle that involves a flask owned by the 16th-century alchemist Edward Kelley. Kelley’s claim to fame? He was rumored to know the secret of eternal life.

Then her family is kidnapped.

To save them, she teams up with the son of a U.S. diplomat and a quirky crew of characters that could only be found on the cobbled lanes of Prague.

As Hana follows clues through Czech castles, torture chambers, and sprawling parks, it’s unclear who she can trust — and she must find depths of courage she didn’t know she possessed. There’s plenty of action and white-knuckle chase scenes as Hana gets closer to the truth.

There’s also poetry, a Romani girl with a troubled history, thrilling motorcycle rides, double-crossing, and an insider’s knowledge of the meandering alleys and secret passages of Prague.

‘And to your left,’ Michal instructs. ‘The Charles Bridge.’

The ancient stone bridge across the Vltava River looks just like the photographs. This is the Prague my mother was longing to see again. I bite down hard on my lip to stop the unexpected tears.