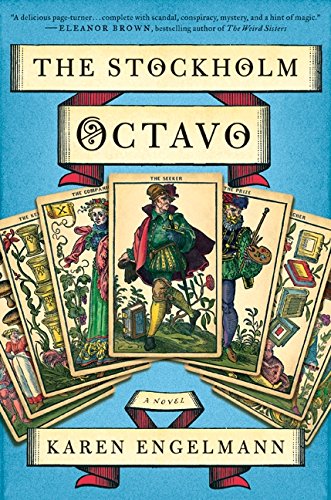 This historical novel of intrigue (432 pages) was published in October of 2012 by Ecco. The book takes you to 17th-century Sweden. Melissa read The Stockholm Octavo and loved it; it wouldn't be on our site if she didn't recommend it.

It’s good to be Emil Larsson. He’s a Sekretaire living the bachelor high-life in 18th-century Stockholm. Brokering deals by day, sipping drinks and playing cards by night at the tables of a popular gaming house.

But one night at the gambling establishment run by one Mrs. Sophia Sparrow, his fate is changed forever. The fortune-teller places a spread of eight cards for him in a secret room. It’s a divination Octavo, and it predicts for him a different path, a route to love and connection that relies on eight other individuals to make the vision come true.

Soon, both Emil and Mrs. Sparrow are introduced to new society and find themselves unwittingly caught up in the drama and intrigue of King Gustav III’s court. It’s the Age of Enlightenment, a golden era when science pulled reality from the shadows of magic and into the light of understanding. But not everyone is ready for the sweeping changes that shape this new world. Violent acts, both grand and small, touch everyone in the story with dramatic and lasting results.

Emil is a charming narrator, especially as he evolves from somewhat-shifty gadabout to a man with principles on the path to real human connection and true love. As you navigate soirees and chance-meetings and assignations with Emil, you’ll meet a cast of intelligent, conniving, vivacious characters that will keep you guessing at what’s in their hearts. Mrs. Sparrow, in particular, reveals hidden depths of feeling and integrity as her Octavo seems to take on a power of its own.

Along the way to its very satisfying conclusion, the plot is generously sprinkled with magic dust in the form of geometry arguments, political intrigue, the secret language of fans, romance, poisonings, handwritten letters, courtly manners, betrayal, and shocking secrets. It’s a Swedish Dangerous Liaisons, and the whole glorious adventure is drenched in the golden hues of sunlight — with sharp shadows underneath to remind you that not all is what it seems.

That night of cards began two years of exceeding good fortune at the tables, and in time led me to the Octavo — a form of divination unique to Mrs. Sparrow. It required a spread of eight cards from an old and mysterious deck distinct from any I have ever seen before. Unlike the vague meanderings of the market square gypsies, her exacting method was inspired by her visions and revealed eight people that would bring about the event her vision conveyed, an event that would shepherd a transformation, a rebirth for the seeker. Of course, rebirth implies a death, but that was never mentioned when the cards were laid. — Karen Engelmann