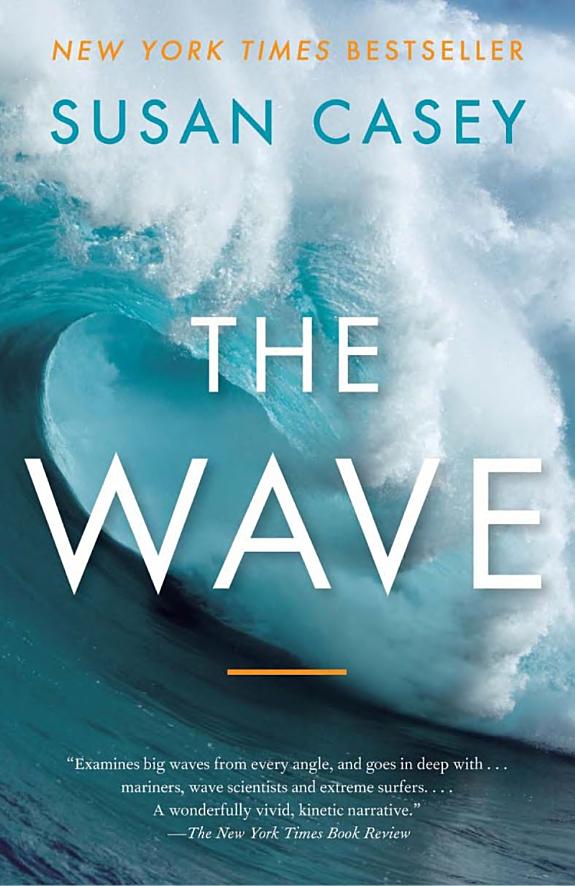 This in-depth look at surfing and science (326 pages) was published in September of 2010 by Doubleday. The book takes you to epic waves around the world. David read The Wave and loved it; it wouldn't be on our site if he didn't recommend it.

In Pursuit of the Rogues, Freaks, and Giants of the Ocean

Waves gently lapping a beach. Surfers riding swells in tropical climes. Sweethearts watching a sunset at sea. This remarkable book will change everything you think you know about the waves on the ocean.

This is the story of rogue waves that suddenly appear — walls of water 100 feet (30m) high or taller, pushing 100 tons of force per square meter. They can rip a ship in half.

For centuries, scientists dismissed the idea of giant waves, assuming the conditions that would produce a wave like that were so rare as to be inconsequential. Then in 1995, on New Year’s Day, proof dramatically surfaced. An oil rig in the North Sea was battered by an 85-foot wave. Seven stories of water hit the rig at 45 miles per hour. Scientific proof that rogue waves exist and probably always have, it’s just that those unlucky enough to see them had not survived.

Author Susan Casey interviewed various people interested in these giant waves: scientists, mariners, and insurance people. She talked to the scientists at the Tenth International Workshop on Wave Hindcasting and Forecasting and Coastal Hazard Symposium and visited the offices of Lloyd’s of London to talk about shipwrecks and unexpected dangers.

And she spent some time hanging out with surfers, specifically, surfers on a mission to ride a 100-foot wave. The idea is this: A surfer is pulled out past the breakers by a rider on a jet ski in the hopes of catching a wave that will absolutely do its best to kill the surfer should they fail to ride it properly. Being driven into the sea floor by a wave is a not infrequent event with much smaller waves. Beyond bragging rights, a rogue-wave surfer can net a half-million dollar purse from a surfwear company — if they survive.

To most people, this would seem needlessly reckless. But, to her credit, Casey’s approach is infused with curiosity: What kind of person wants to do this? What is their life like? Who hears something like, ‘Hey, big waves forecast this weekend in Tahiti,’ and then goes — surfboard, jet ski, and willing support staff in tow?

If the prose is a bit dramatic in some passages, that seems appropriate. After all, this is a book about a wave that might kill someone if they are close enough to see it. Perhaps hyperbole, in this case, is warranted.

However you feel about splashing about in the sea, this is a solid adventure book that both demystifies and mythologizes the daunting power of ocean waves.

The Munchen’s disappearance points to the main problem with proving the existence of a giant wave: if you run into that kind of nightmare, it’s likely to be the last one you’ll have. The force of waves is hard to overstate. An eighteen-inch wave can topple a wall built to withstand 125-mile-per-hour winds, for instance, and coastal advisories are issued for even five-foot-tall surf, which regularly kills people caught in the wrong places. The number of people who have witnessed a hundred-foot-wave at close range and made it back home to describe the experience is a very small one. — Susan Casey