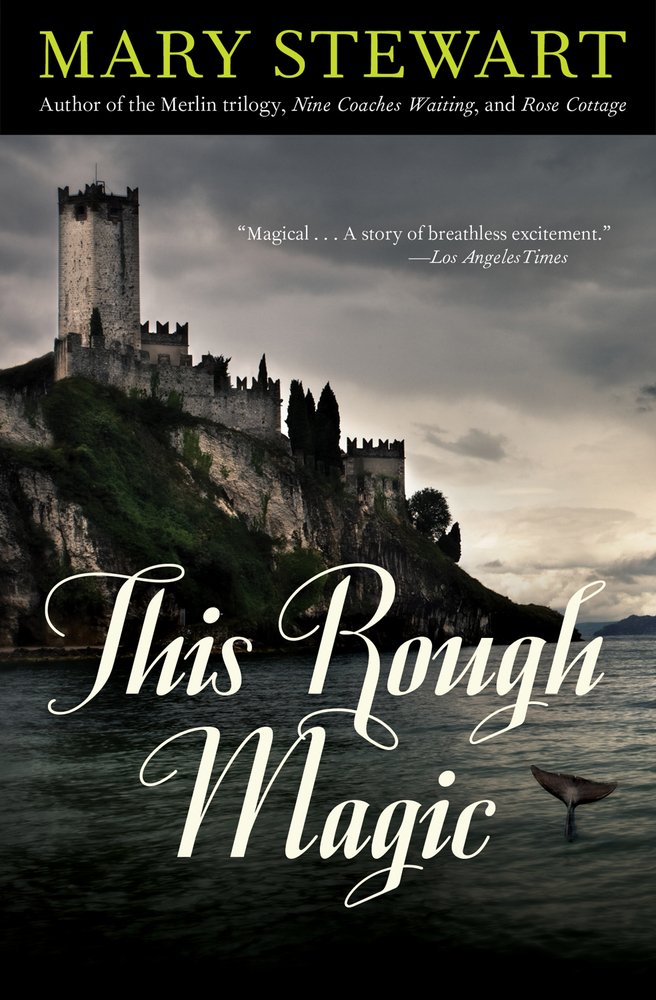 This mystery romance (348 pages) was published in January of 2013 by Chicago Review Press. The book takes you to the island of Corfu in Greece. Melissa read This Rough Magic and loved it; it wouldn't be on our site if she didn't recommend it.

First published in 1964, this is the dreamy, delightfully melodramatic novel that will make you want to book a trip to Greece as soon as possible. Mary Stewart was the queen of mystery-romance, and all of her gifts are in full effect here. Grab a sun hat!

Although it’s set in the golden sun of the Greek island of Corfu, there are Gothic tropes galore. There’s a sprawling, shadowy mansion, a secret cave and underground cellars, a deadly fight on a boat in an epic storm, a missing diamond ring, a possible murder, romance, trickery, and a magical dolphin.

At this point, does the plot even matter?

We would argue that it does not. But happily, there is a cracker of a plot that takes advantage of the gorgeous scenery.

Our heroine Lucy, a struggling actress in London, finds herself emotionally adrift when her latest show closes. So she takes off to Corfu to visit her sister, who happens to be married to a wealthy husband, landlord of several large homes on the island — including one he’s rented to an iconic stage actor who retired under mysterious circumstances.

Lucy is just getting settled on the island when strange occurrences begin to happen. When two islanders mysteriously drown, she’s drawn into a perilous investigation that puts her at odds — or does it? — with the famous actor’s son, a talented but enigmatic musician.

The interpersonal hijinks and investigation into the deaths are set against the backdrop of Corfu and Greece in the late 1950s. In case you’re not totally up on your Balkan history, at the time, Albania — just 20 miles across a narrow stretch of water — was a communist country with closed borders, so smuggling and Red Fear infuse the mystery with real-life political drama.

To say anything else about the plot would ruin the fun. Rest assured, however, that there are moments of perilous danger, shocking revelations, and sweet romance. Mary Stewart is credited with inventing mystery-romance novels that give equal weight to both sides of the story. Her mystery plots are rich with suspense, suspects, and twists. The process of solving them gives her heroine — courageous, intelligent, and intuitive in her own right — a justifiable reason to swoon into his arms.

Heads up: We love this on audiobook. The story is told in Lucy’s first-person voice, so the audiobook is like sitting down with your BFF — and a glass of retsina wine — to hear about the wild time she had in Greece. The narration by British actress Helen Johns is a just-right combination of warm and breathy, and she embodies Lucy’s fear and bravery with equal aplomb.

I shuddered, and drank my coffee, leaning back in my chair to gaze out across pine tops furry with gold towards the sparkling sea, and surrendering myself to the dreamlike feeling that marks the start of a holiday in a place like this when one is tired, and has been transported overnight from the April chill of England to the sunlight of a magic island in the Ionian Sea… The bay itself was hidden by trees, but the view ahead was glorious – a stretch of the calm, shimmering Gulf that lies in the curved arm of Corfu. Away northward, across the dark blue strait, loomed, insubstantial as mist, the ghostly snows of Albania. It was a scene of the most profound and enchanted peace. No sound but the birds; nothing in sight but trees and sky and sun-reflecting sea. — Mary Stewart

Greek Meatballs and Lemon Potatoes Inspired by 'This Rough Magic'

The phrase meat-and-potatoes is basically code for comfort food. Add a touch of sunshine (a.k.a., lemon) and Greek herbs to the mix, and you've got an instant trip to the Greek islands embarking from your kitchen.