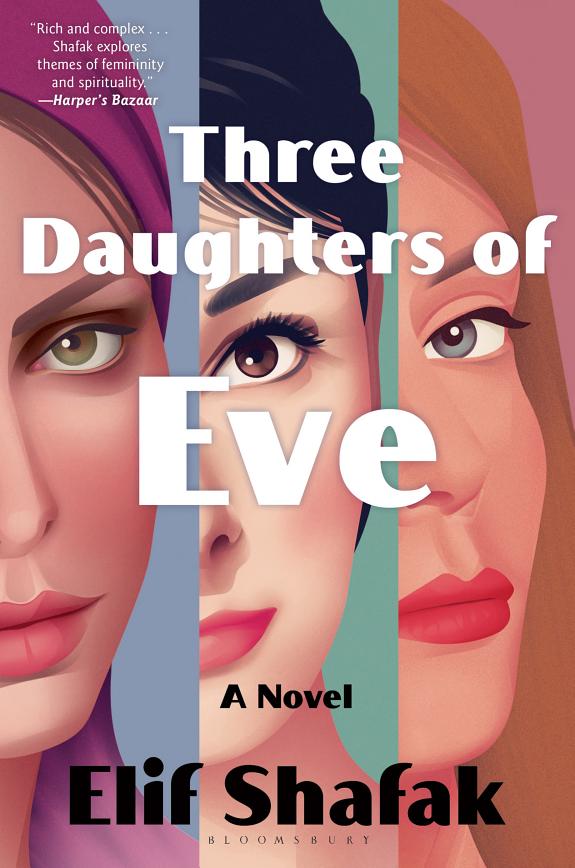 This thriller/coming-of-age story (384 pages) was published in December of 2017 by Bloomsbury Publishing. The book takes you to modern Istanbul and Oxford. Melissa read Three Daughters of Eve and loved it; it wouldn't be on our site if she didn't recommend it.

Author Elif Shafak is a literary force: an award-winning author whose books are as readable as they are sharp and insightful. Her works have been translated into 55 languages, she was shortlisted for the Booker Prize, and Politico named her one of the twelve people ‘who will give you a much needed lift of the heart.’

She brings all of that, plus deep compassion, to this novel. It’s a mashup of domestic noir and coming-of-age story set in Istanbul in the 1980s and 2016 and at Oxford University in the early aughts.

When the story opens, it’s Istanbul, 2016, and our heroine Peri — 35 years old, upper-middle class — is stuck in nightmarish traffic with her daughter, on the way to an uppercrust dinner party she does not want to attend. What happens next is a shocking thrill ride that ends with a chase scene and a physical struggle.

During the altercation, Peri’s purse is upended, and a Polaroid photo flutters to the ground. Taken during her student days at Oxford, it captures a fleeting moment with her two best friends and their charismatic professor. That photo unleashes a flood of memories and emotions in her.

The rest of the story alternates between the truly awful dinner party of the present and flashbacks through Peri’s past to show the events that led to that photo and this evening.

If you’ve ever wondered what it might be like to attend an Oxford seminar, this book will take you there. And when the narrative cuts back to that dinner party, you’ll get a peek inside the life of the upwardly mobile and wealthy in modern Istanbul. Spoiler: They’re a self-absorbed and hypocritical crowd.

Although Peri can be very prickly — and she commits a few unfathomable acts — she’s also, somehow, likable and vulnerable: ‘Peri disliked these dinner parties, which went on late into the night and often left her with a migraine the next day. She would rather stay home and, in the witching hours, be immersed in a novel — reading being her way to connect with the universe.’

This page-turning novel tackles the significant issues of sexual harassment, extremism, and the tension between the devout and the secular — while it explores more intimate challenges of identity, forgiveness, and loyalty. All of that is woven into the story of Peri, a flawed, intelligent, sometimes snarky woman finding her way in a complicated world.

It was an ordinary spring day in Istanbul, a long and leaden afternoon like so many others, when she discovered, with a hollowness in her stomach, that she was capable of killing someone. She had always suspected that even the calmest and sweetest women under stress were prone to outbursts of violence. Since she thought of herself as neither calm nor sweet she had reckoned that her potential to lose control was considerably great than theirs. — Elif Shafak