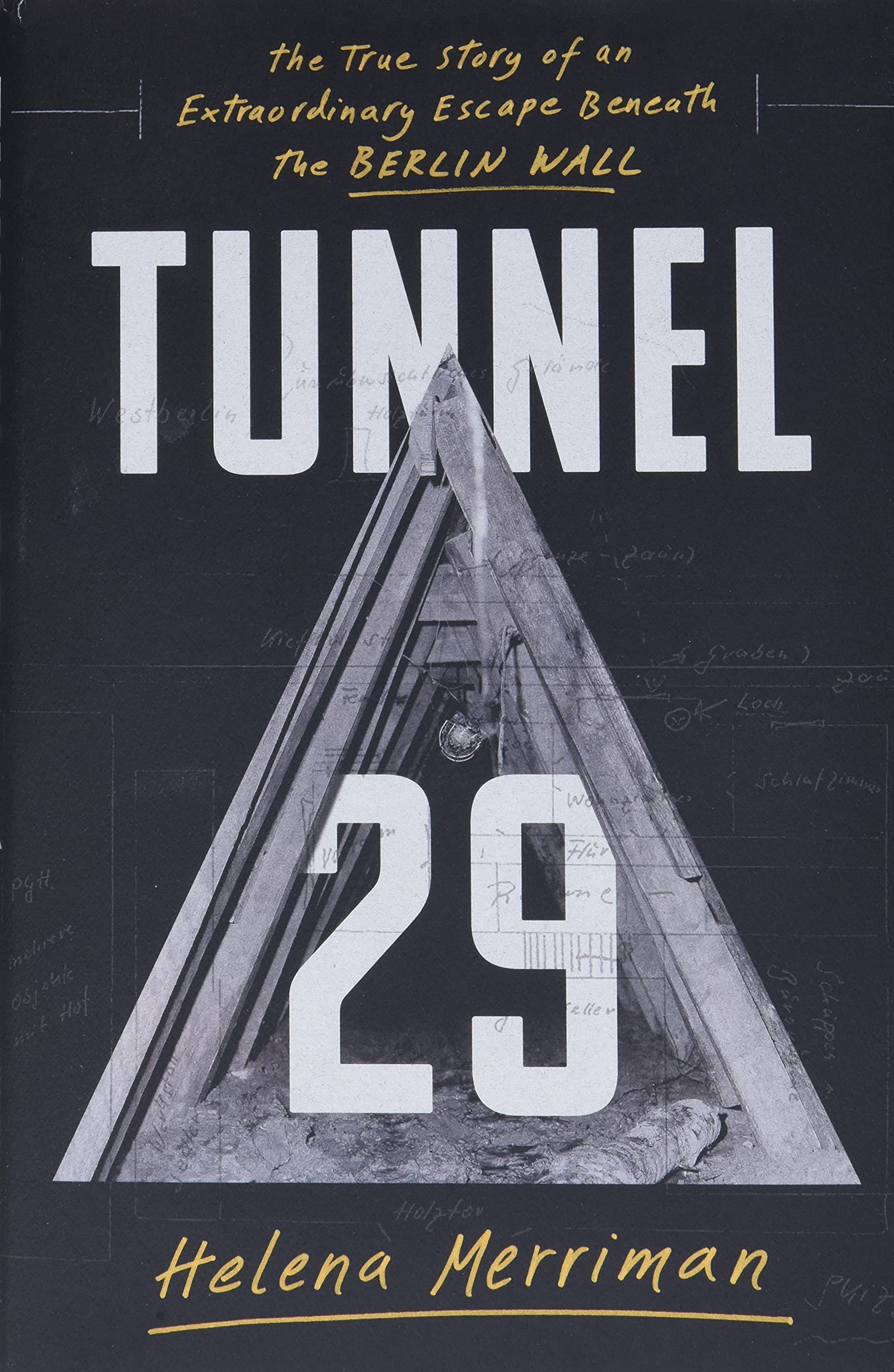 This thrilling nonfiction account (352 pages) was published in August of 2021 by PublicAffairs. The book takes you to Cold War-era Berlin. Melissa read Tunnel 29 and loved it; it wouldn't be on our site if she didn't recommend it.

The True Story of an Extraordinary Escape Beneath the Berlin Wall

You’ve surely heard of the Cold War-era tunnels built under the Berlin Wall to help East Germans escape to freedom in the West. But in this gripping nonfiction account, you’ll learn the extraordinary story of a student who got out, then found a way back in to rescue other innocent people.

In 1961, a young man named Joachim Rudolph escaped from East Berlin while the Berlin Wall was being built. In a feat of remarkable timing, he was able to slip across the wall after the concrete had been poured, but before it was topped with barbed wire. Free and safe on the other side, he decided to tunnel back in — from West to East — to help others escape.

Well researched and well told by author Helena Merriman, this story is filled with riveting details that make an almost unbelievable story feel intimate and all too real. A nail-biting page-turner, it reads like a thriller even though we know it ends in triumph. The not-really-a-spoiler-spoiler: Twenty-nine people used Joachim’s tunnel to reach safety.

But before that exhilarating moment, there are terrifying and confounding ones; so many reasons the plan should have failed and so many times when it almost did. There are near-misses with the Stasi, who are always armed and don’t ask questions. There’s an informer who infiltrates a rescue organization and wreaks havoc on their missions. At one point, the tunnel is very close to being completed but floods with water. There are equipment issues and conflicts among the diggers and so many palpable feelings. But each time, Joachim works through the problem and clings to his commitment to helping others escape.

When the team of diggers — well-intentioned students, mostly — finally succeed and move 29 people through the tunnel to safety, it’s a massive relief, but it’s also a bit somber. It was so hard on diggers and escapees alike. So much was lost. And, of course, we know that the Berlin Wall continued to divide people for almost 30 years more.

Should you want the full multimedia treatment, this book is based on a wildly popular 2019 podcast that’s been downloaded 5 million times. You can also watch The Tunnel, a black-and-white documentary filmed by NBC in 1962 while the dig was going on. Haunting and electric, it captures the moment when those 29 escapees exited the tunnel into a basement in West Berlin.

It’s dusk in East Berlin. The streets are covered in streamers and pastel splodges of ice cream after the annual children’s fair. High on sugar, children have been allowed to stay out late, and they crane their necks to the sky, watching fireworks… In the People’s Army headquarters, the country’s most senior military commanders are gorging on a luxurious buffet. It’s all the food you can’t usually get in East Germany – sausage, veal, smoked salmon, caviar. The commanders have no idea what’s brought this on… All they’ve heard is that there’s a secret operation happening that night.

At 8 p.m. exactly, the commanders open sealed envelopes and read detailed instructions, setting out what must happen every hour of the night ahead.

Meanwhile, the mastermind of all this, Walter Ulbricht, is hosting a garden party. It’s out of character – he’s serious, terrible at small talk and doesn’t have friends, but here he is, surrounded by his ministers in his woodland retreat… After supper, at around 10 p.m., as hundreds of tanks and armoured personnel carriers rumble towards East Berlin, ready to catch anyone who might escape, Walter Ulbricht directs his guests into a room, and that’s when he tells them: He’s about to close the border between East and West Berlin. If anyone wanted to stop him, warn friends or even escape, it’s too late. — Helena Merriman