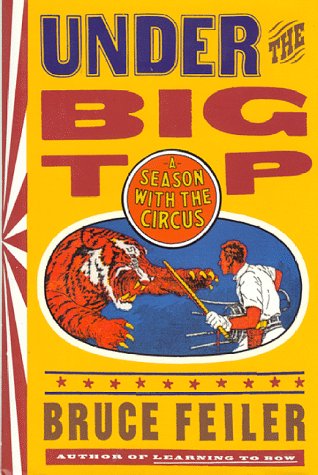 This memoir (288 pages) was published in June of 1995 by Scribner. The book takes you to a classic American circus. David read Under the Big Top and loved it; it wouldn't be on our site if he didn't recommend it.

Under the Big Top

A Season with the Circus

If you’ve ever wanted to run away with this circus, this memoir by journalist Bruce Feiler is just the book for you. To fulfill a childhood dream, he joined a troupe and became a clown named ‘Ruff Draft,’ traveling through 99 cities with the Clyde Beatty/Cole Brothers Circus.

With a self-effacing sense of humor and a shart outsiders perspective, Feiler takes us into the everyday world — exotic, insular, often magical, sometimes perilous — of a traveling circus. During one remarkable year, he journeyed through 16 US states, performing for locals and getting to know his circus family.

Although some of the circus fold seem larger-than-life, Feiler shows us that behind the razzle-dazzle, the performers are a microcosm of America. They’re diverse, representing different ethnic backgrounds, religions, and nationalities. But they’re also regular people in a dangerous — and exciting — occupation, simply trying to build a life. Their stories are universal: searching for love, nursing broken hearts and dreams, weary from the daily grind, buoyed by a good day.

Feiler’s enthusiasm and affection shine in his writing, and the tales he weaves are both enthralling and bittersweet. Life with the circus is everything he hoped it would be and nothing like he imagined. He describes deadly accidents involving both performers and a drunken customer. But there are also moments of transcendence: the birth of a tiger cub, or the delight of children when it’s a very good day to be a clown.

This is a tale of big adventure and small moments that explores the highs and lows of a thoroughly American entertainment.

What better way to discover America, I thought, than from the back lot of a circus. I could join a show… Circuses, after all, have been around since the founding of America. They crisscross the country year after year, visiting towns both large and small and always managing to reinvent themselves on the verge of extinction. They are, I believed, the embodiment of our dreams: a metaphor for ourselves. And, I hoped, a way home. — Bruce Feiler