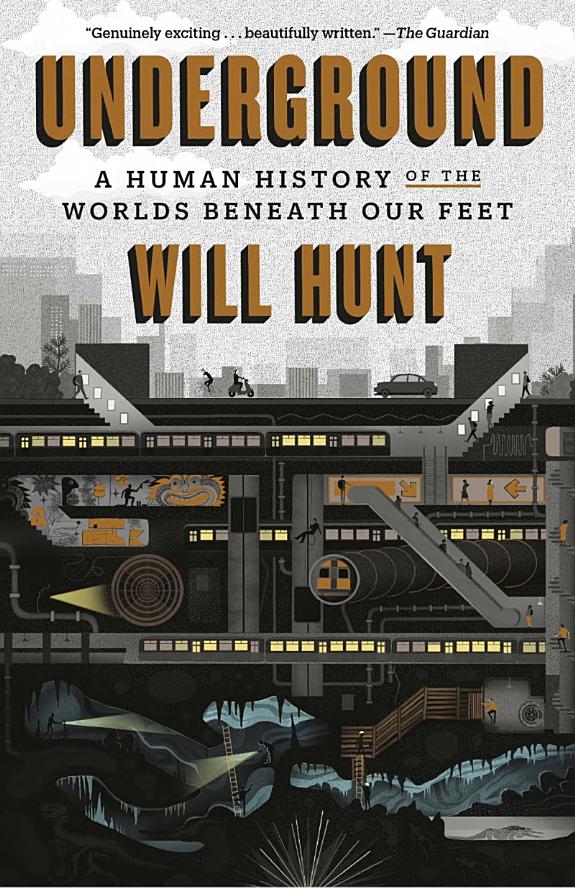 This exciting travelogue (288 pages) was published in January of 2019 by Random House. The book takes you to underground spaces around the world. David read Underground and loved it; it wouldn't be on our site if he didn't recommend it.

A Human History of the Worlds Beneath Our Feet

This collection of essays about the world beneath our feet is nonfiction fireworks, packed with one remarkable revelation after another. So grab a flashlight and let’s go!

With infectious enthusiasm and a voice that deftly juggles science and wonder, author Will Hunt will take you underground into sacred caves, derelict subway stations, nuclear bunkers, and ancient underground cities. The book opens with his origin story, an anecdote that shows how he became so attuned to what mysterious underground spaces mean to us, physically and emotionally.

As a kid in Providence, Rhode Island, Hunt learned from a teacher about an abandoned underground tunnel nearby. He went looking for that tunnel and just never stopped. In subsequent chapters, he shares the story of a group that traversed Paris entirely underground, camping and hiking through the catacombs like a big, damp, dark park.

He explores how some cultures deify the spaces underground; in the Bolivian Andes, we learn about what the locals call ‘the mountain that eats men.’ He examines the significance of 14,000-year-old cave drawings and tells a story that proves Pythagoras was more than his geometry theorem. The mathematician was a ‘semi-divine man, a sage, who could hear the music of the stars…’ and ‘healed the sick with incantations, predicted earthquakes, suppressed thunderstorms, journeyed into the past, and had the capacity to bilocate, meaning he could be in two places at once.’

If you’re not intrigued and entertained by a book that’s filled with fantastic photos and celebrates illegal parties in Paris, the possibility of extraterrestrial life, and the revelation that Pythagoras was either extra-human or a cult leader, perhaps you need to reexamine your priorities.

The doors on the underworld kingdom blew open in 1994, when a young biologist from New Mexico named Penny Boston climbed down to the very bottom of Lechuguilla Cave, two thousand feet underground. It was an environment, she said, ‘as close as you can get to traveling to another planet without actually leaving earth’ — far too remote to support even the hardiest troglobite, or any other living creature. But at one point, Boston was scrutinizing a furry, brown geological growth on the ceiling of a cave passage, when a drip of water plopped directly into her eye. Boston was amazed to find that her eye puffed up and swelled shut. It could only have meant one thing: she had been infected by bacteria, by tiny microorganisms living in the cave’s depths, far deeper underground than anyone imagined possible. — Will Hunt