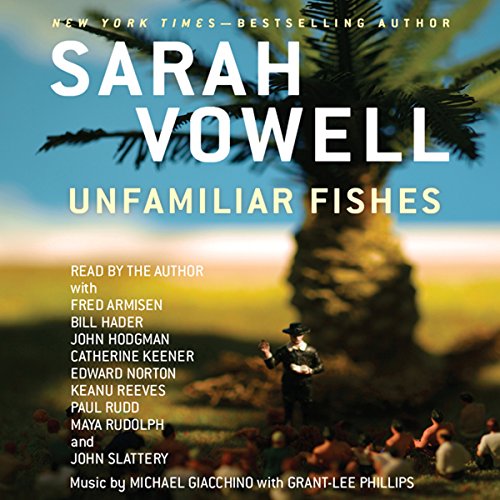 This book (7 hours and 28 minutes) was published in March of 2011 by Simon & Schuster Audio. The audiobook takes you to Hawaii. David listened to Unfamiliar Fishes and loved it; it wouldn't be on our site if he didn't recommend it.

Sarah Vowell is the person you wish had been sitting with you in the back of history class. She’d entertain you with a stream of commentary, but she’d also be taking notes because she’s a smart-aleck who pays attention. This is her history of Hawaii delivered with snark and insight.

Specifically, Vowell takes on the emotionally challenging topic of US colonization of Hawaii and, along the way, weaves in the way Cuba, Puerto Rico, the Philippines, and Guam were also snared in the annexation net.

Her story begins when Hawaii was ruled by the Polynesian natives descended from the original settlers. It ends when they ceded their independence to the US because of Christianity, capitalism, and the American military. This is probably not a book that will make you feel great about the United States in the 19th century — but it doesn’t seem unbalanced, either.

Vowell is part Cherokee, a descendant of the Native Americans who were marched at gunpoint to Oklahoma on the Trail of Tears. Early in the book, she tells the story of her great-grandfather emigrating from Sweden:

‘Whenever I eat plate lunch, I always think back to the lore of my Swedish great-grandfather’s voyage across the Atlantic. Supposedly, the only food he brought with him on the ship was a big hunk of cheese. Then he befriended a German in steerage whose only food was a big hunk of sausage. The Swede shared his cheese with the German and the German shared his sausage with the Swede.

Growing up, I came to know America as two places — a rapacious country built on the destruction of its original inhabitants, and a welcoming land of opportunity and generosity built by people who shared their sausage and their cheese.’

Vowell has done her homework. She shares stories unearthed in her readings of the diaries and speeches of the original missionaries and their wives. These historical records are supported with modern interviews. Reading it is like having a friend who spent nine months immersing herself in Hawaii’s beginnings, then came to your place for dinner — a bottle of wine in hand — to tell you all about it.

With this engaging audiobook, you get a cast of talented voices telling you all about it. It’s narrated by the author, along with Keanu Reeves, Paul Rudd, Fred Armisen, Bill Hader, Maya Rudolph, and John Hodgman as Teddy Roosevelt. If you’re curious about the gritty details of how Hawaii became a state, or simply like spending time with Sarah Vowell, this book is an informative, entertaining journey.

I suppose the double-sided way I see the history of Hawaii — as a painful tale of native loss combined with an idealistic multiethnic saga symbolized by mixed plates in which soy sauce and mayonnaise peacefully coexist and congeal — tracks with how I see the history of the United States in general. — Sarah Vowell