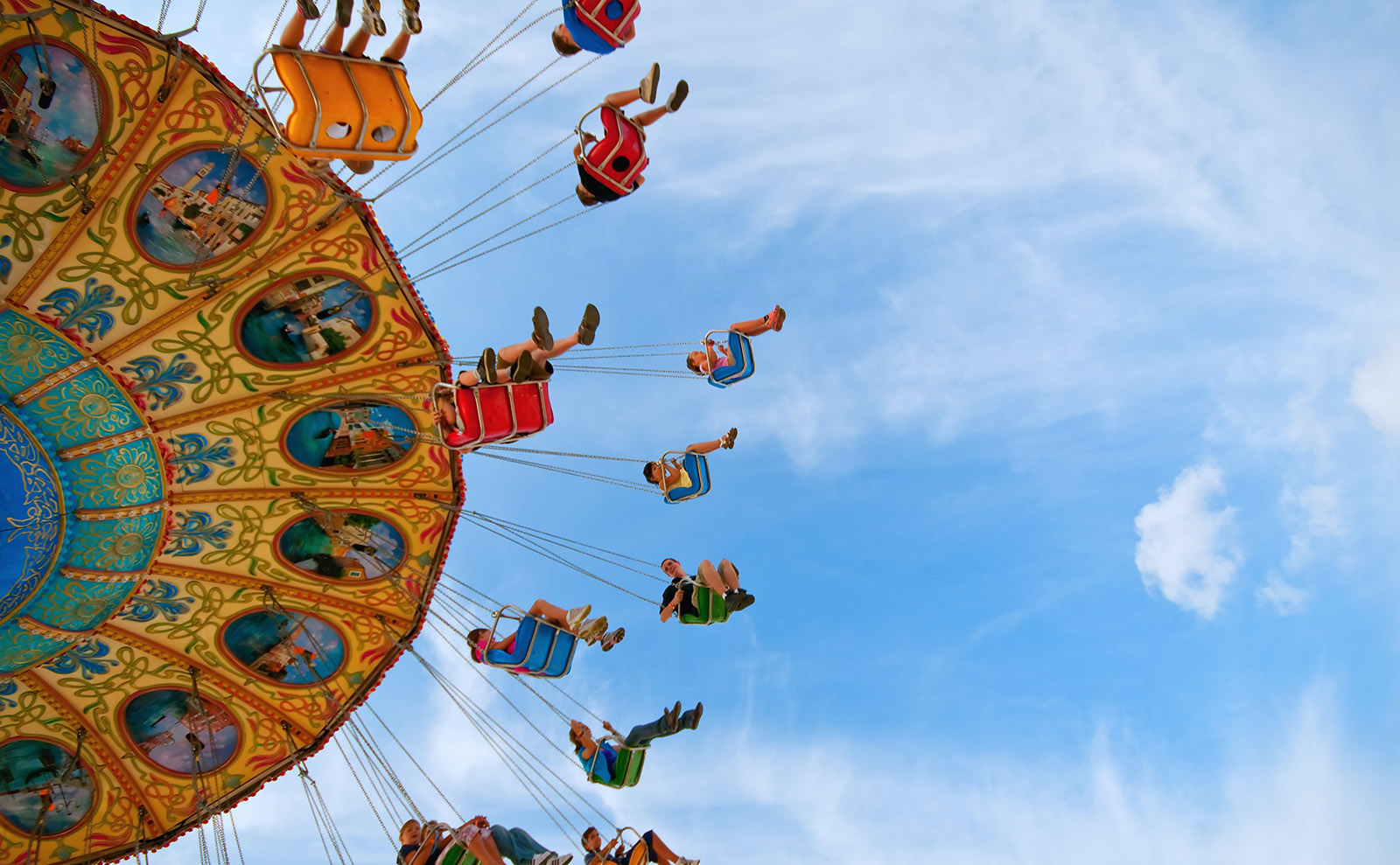 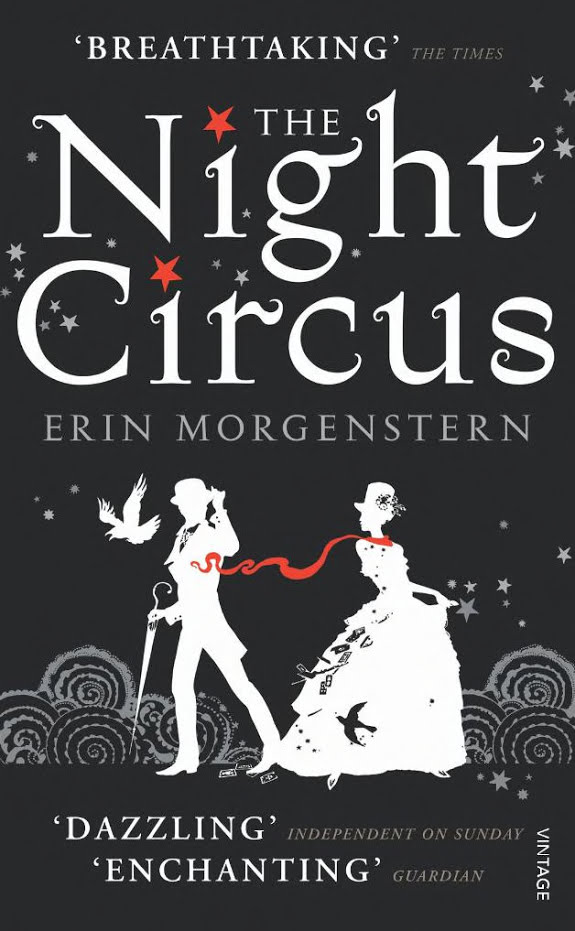 Erin Morgenstern’s novel The Night Circus is a fantasy confection, a sweeping adventure that weaves grand love stories, of both the romantic and familial variety, into the daily life of a magical circus.

The circus arrives without warning, its black-and-white striped tents enticingly arranged in a field, surrounded by an ornate wrought-iron fence bearing a sign that reads: Opens at nightfall. Closes at dawn. Guarding the entrance is a cauldron of fire that burns not yellow and red, but ‘blinding white’ with ‘a shower of sparks falling like snowflakes around it.’

Along with the visual spectacle, the air is filled with aromas that induce longing — even during the day when the circus is closed, gathering its energy for the night’s festivities:

The circus feels strange in the daytime, too quiet. There is no music, no noise. Just the calls of nearby birds and the rustling of the leaves in the trees. There doesn’t even appear to be anyone there, as though the whole place is deserted. It smells like it does at night, but fainter, or caramel and popcorn and smoke from the bonfire.

In a memorable scene, the red-haired twins Poppet and Widget — born into a circus family of wildcat tamers — demand that the caramel-apple vendor drizzle golden caramel over a black-and-white striped paper bag of popcorn. Widget eats it in ‘messy handfuls,’ and soon patrons nearby are clamoring for the salty-sweet treat.

In real life, caramel corn was invented by two brothers, German immigrants, named Frederick and Louis Rueckheim. They emigrated to the United States, settled in Chicago, and opened a popcorn shop where they experimented with different combinations. And at the 1893 World’s Columbian Exhibition, they introduced Cracker Jack to the world. And thus, the caramel-corn craze began.

This recipe is far better than anything you can eat out of a box, and it’s surprisingly easy to make. Follow Melissa’s tips for perfectly-popped popcorn, then just be sure to stir the caramel constantly and set a timer for 5 minutes. The hardest part is waiting for the popcorn to cool so you can eat it. Melissa is not a candy maker, and her batch of caramel corn was perfect on the first try.

Also, good to know: Melissa likes savory things; I prefer sweet. There is a compromise! It’s straightforward to cut the caramel recipe in half. Prepare the plain popcorn as directed, then divide in half in separate bowls. Add butter and salt to the first, for your salty friends; coat the other half with the caramel and proceed with the recipe.—David

Prep. Heat oven to 300F/150C degrees and line a large baking sheet with parchment paper. Lightly grease the inside of a large heat-proof bowl.

Make the popcorn. In a large pot over high heat, warm the oil and 2 popcorn kernels. When the kernels pop, add the remaining kernels to the pot, cover with a lid, and remove from the heat. Holding the lid in place, shake the pot for 30 seconds so that all the kernels are coated with oil. Return to the heat and reduce the heat to medium-low. Crack the lid open to release the steam — or remove the lid and replace it with an upside-down colander or strainer. (This works GREAT!) Cook, shaking the pot occasionally until the popping stops. Transfer the popcorn to the prepared bowl and set aside.

Toast the nuts. Place the nuts on the prepared baking sheet and roast in the oven, 5-10 minutes, until slightly darkened. Remove from the oven and add to the bowl with the popcorn.

Make the caramel. In a medium saucepan, combine the maple syrup, butter, and brown sugar over high heat. Cook, stirring constantly until the butter and sugar have melted; the mixture will look foamy. Continue cooking, stirring constantly, for exactly 5 minutes. The caramel will be bubbly, slightly darker in color, and will pull away from the sides of the pan as you stir. (If you have an instant-read thermometer, you want the temp to reach 240F/115C.) Remove the pan from the heat and add the salt, vanilla, and baking soda, stirring constantly. The mixture may bubble up a bit.

Big finish. Immediately pour the hot caramel the popcorn, then use a spatula to well, coating the popcorn. Transfer the popcorn to the prepared baking sheet and spread out into a single layer. Bake for 25 minutes, rotating the pan after 15. To test for doneness: Remove a piece of popcorn, let it cool for about a minute. If it’s crispy when you eat it, it’s ready! Taste and sprinkle with a bit more salt, if that’s your thing. Let it cool before serving for maximum crispiness. Store any unlikely leftovers in an airtight container at room temperature.

He had expected it to be a show. Something to sit in a chair and watch. He realized quickly how wrong he was… He did not know what tents to choose out of dozens of options, each with tantalizing signs hinting at the contents. And every turn he took through the twisting striped pathways led to more tents, more signs, more mysteries. He found a tent full of acrobats and stayed amongst them as they twirled and spun until his neck ached from staring up. He wandered through a tent full of mirrors and saw hundreds and thousands of Baileys staring, wide-eyed, back at him… Even the food was amazing. Apples dipped in caramel so dark they appeared almost blackened but remained light and crisp and sweet. Chocolate bats with impossibly delicate wings. The most delicious cider Bailey had ever tasted. Everything was magical. And it seemed to go on forever. — Erin Morgenstern

Step right up to Le Cirque des Rêves, a mysterious black-and-white circus that arrives without warning and opens its gates only from sunset to sunrise. It’s an enchanting place, to be sure, but its magic is fueled by old rivalries and dark secrets. Traveling from Victorian London to Paris, New York, and Boston, this is a tale of sweeping romance and reason-defying love and loyalty and adventure and magic. At the heart of the story are two remarkable illusionists and one ordinary (extraordinary) boy, all thrust into an adventure that’s grander than anything they could have imagined — with stakes higher than anyone would like. {more}

This fantasy adventure (400 pages) was published in September of 2011 by Doubleday. The book takes you to a magical traveling circus. read The Night Circus and loved it; it wouldn't be on our site if didn't recommend it.

Postcards from the Circus: Around the World Under the Big Top

If you've ever daydreamed about running away with the circus, this post is for you. Take a dazzling virtual tour of the world with these circuses from Canada to Europe, Africa to Australia, and everywhere in between.