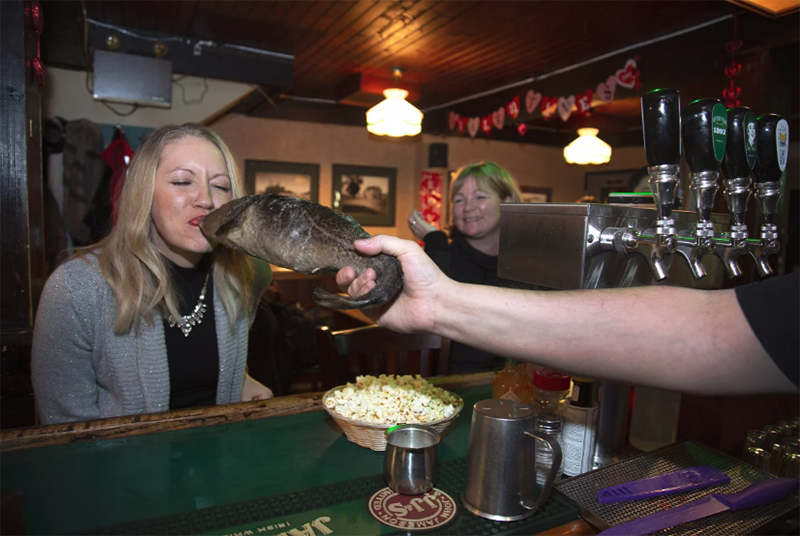 This is a transcription of ‘LoLT: Newfoundland Screech & New Books — 02 September 2022.’

Melissa: Coming up, a poetry collection to make you feel fierce.

David: A modern take on a classic locked room mystery.

Melissa: Right now, I am really enjoying reading the poetry collection these are the words by Nikita Gill. I’ve mentioned this in my newsletter, but maybe people who listen to our show don’t know that. On my last birthday I requested a specific journal and pen, and I started keeping a poetry journal to collect poems that I like.

Melissa: And one of the best sources for poems has been Nikita Gill. She’s a British -Indian poet, playwright, writer, and illustrator. I follow her on Twitter and she shares multiple poems a day. She’s the author of five of her own poetry collections, but she rarely shares her own work on Twitter. Instead, she features work by other poets that move her.

Melissa: And I’m not alone in thinking that she’s great. She has 127,000 followers on Twitter.

David: Good for her.

Melissa: And on Instagram, she has 654,000 followers, which I was very excited to see. Go, poetry lovers! And on Instagram, she shares her own poems. And somehow, even though her audience is huge, it feels really intimate and personal. Her new collection is called these Are the words. It’s meant for a YA audience, and I hope that it makes its way into teenagers hands. But as a grown up, I will tell you, these poems are very impactful for me, too. In an interview, she said that she wanted to address the things she wishes someone had told her when she was younger. So her poetry is exploring things like body shaming and heartbreak and first love and how to deal with your parents. What are safe ways to express anger? When is it appropriate to feel angry? Like these are life lessons we all kind of need.

Melissa: I wanted to share a short poem from the book. It’s called Another Story.

Melissa: Nikita Gill’s poetry collection these are the words is out now.

David: My book is Daisy Darker by Alice Feeney. Alice Feeney is the author of Rock, Paper, Scissors and Sometimes I Lie, both of which are mystery thrillers that have gone on to be TV series.

Melissa: Which I have on my TBR. My endless TBR.

David: This one, Daisy Darker, is about a family. A family with a lot of dark secrets.

David: They gather together in a crumbling gothic house on a tiny private island. They are there to celebrate the matriarch’s 80th birthday. They call her Nana. Nana is eccentric. She has a wall of 80 clocks, one for each year of her life.

David: And she has her guest punch in on a time clock.

David: I read that, and I was like, Oh, Chekhov’s time clock. The family hasn’t all been in one place for over a decade, and when the tide comes in to this little island, they’ll be cut off from the rest of the world for 8 hours.

Melissa: I love a tidal island.

Melissa: As they must.

David: eah. At midnight, there’s a scream. Nana is dead on the floor of the kitchen. And there’s a poem on the chalkboard there. In what appears to be her writing?

David: Yeah. This book’s been out for a few weeks in the UK where the reviews have been great. More than one person mentioned that it’s a lovely tribute to Agatha Christie’s And Then There Were None.

David: But the author also finds a way to sort of make it her own, to make it modern. This book just came out in the U.S. this week, if you like, the sound of a nice, gothic, locked room thriller. This is Daisy Decker by Alice Feeney.

Melissa: I will be reading that immediately, as soon as my required reading for Strong Sense of Place is wrapped up.

David: And now our Distraction of the Week. I want to talk about this peculiar Newfoundlanders habit of screeching people in.

David: Yeah. So this is a ritual they have for welcoming people into their community.

David: Yeah. So I found out about this when we were doing the research for Canada episode. Before I tell you about screeching someone in, I need to tell you about Screech. Screech is a Newfoundlander term for almost any cheap, high-alcohol spirit, but it’s been most closely associated with Jamaican rum. As the Internet says, there was a time back when the Canadians were shipping salt fish to the West Indies in exchange for rum.

Melissa: Ooh, they got much better end of the deal.

David: The result of that trade was that dry fish became the national dish for Jamaicans and rum became the national drink for Newfoundlanders. They call it Screech because a visiting American downed a glass of rum in one toss, sometime around the end of the last World War. He screamed when people came to see what was wrong. Someone said, What the cripes was that ungodly screech? And a local person says, The screech? ‘Tis the rum, me son.

Melissa: I just want to start using the phrase ‘what the cripes’ as often as possible.

David: So that all brings us to the screech in. This is a ceremony that’s performed on those who come from a way to bring them into the community. The specifics vary from community to community, but the basics are mostly the same. It frequently starts with a ceremony leader asking if those present would like to become Newfoundlanders.

Melissa: The obvious answer is yes.

David: And you’re wrong. The proper response is a hearty A by, which is a local form of agreement. They may have you eat what they call a Newfoundland steak.

Melissa: What is that?

David: A piece of baloney.

Melissa: [laughter] I love it.

David: And then they ask you a question. Are you a screecher? Or possibly is you a Newfoundlanders? And there’s a proper response to that. The proper response is indeed I is meal cook and long may your jib draw.

David: That’s it. That’s what you say.

Melissa: You can’t just throw in a hearty aye and call it a day.

David: It needs to be that. Exactly. Those words. Those words in common English mean. Yes, I am my old friend. And may your sales always catch wind.

David: Yeah. And then you drink the screech, and then you kiss a fish.

Melissa: Are we talking like a little peck? Is it a really romantic or perhaps slobbery kiss?

David: I’ve seen a bunch of people do it, and most of them seem to go with the peck.

Melissa: Yeah, I think that would probably be the way to go there.

Melissa: Live or dead fish? That may have been the first question I should ask.

David: Yeah. The fish is passed around and everyone kisses it on the mouth. Unclear if we’ve changed that in our COVID time.

Melissa: AI mean, you got the screech in your mouth. It’s fine. Yeah.

David: And then you’ve been screeched in. That’s it. Some places make you stand in a bucket of saltwater through the ceremony.

David: Yeah. Some places have you wear what they call a sou’wester, which is a floppy yellow hat you may associate with fishing. Yep. I like the idea of making up a ceremony to jump people into the reading community.

Melissa: Oh, we should think about that. If you guys have ideas for what should be the ritual for joining the Strong Sense of Place crew, send them on to us.

David: Drop us a line. I think tea or coffee or maybe there’s a whisky called Writer’s Tears that are kind of like.

Melissa: Ooh, tea with Writer’s Tears in it. Maybe while balancing Moby Dick on your head.

David: Drop your favorite literary sentence or something and then run to the library.

Melissa: Visit strongsenseofplace.com/library for more details about the books we discussed and to send us your thoughts on how we should welcome people into our reader community.

David: Yeah, thanks for joining us in The Library of Lost Time. Remember to visit your local library and your independent bookstore to lose some time yourself.