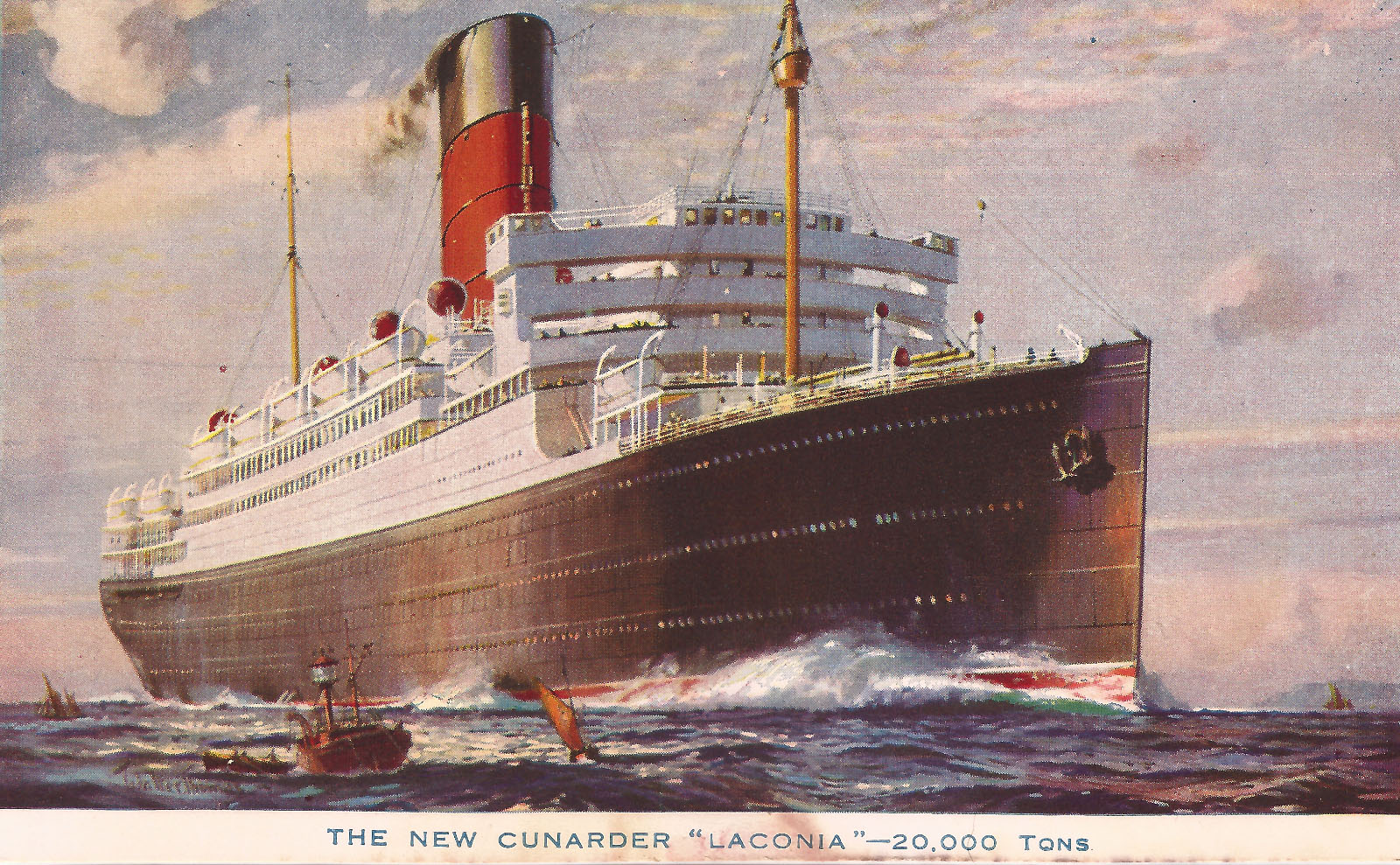 Cruising Around the World on Cunard's Luxury Liner RMS Laconia

On the morning of 21 November 1922, if you were a bit posh and more than a little adventurous, you might have boarded the luxury liner Laconia for her inaugural around-the-world cruise. For 130 glorious days, you’d visit some of the world’s most exotic destinations — Yokohoma and Shanghai, Rangoon and Bombay, Egypt, and Naples. You’d steam through the Suez Canal, visit the Taj Mahal, and pass through the Valley of the Kings.

The ship was the pride of the Cunard Line, a grand ocean liner with six steam engines, one majestic funnel, and a deck that spanned almost 600 feet. Her itinerary included stops in 22 ports around the globe, scheduled with care ‘when the tropical loveliness is twice welcome — for its own sake and as an escape from dreary winter, left behind.’ (Click here to see the scan of the original New York Times article about the cruise.)

During the voyage, you might splash around in two outdoor swimming pools or take part in sports, including archery, in a gymnasium on the deck. The ship had modern conveniences like in-room running water and two elevators, fore and aft, as well as a glass-enclosed café, writing rooms, smoking rooms, a specially curated library, and decks where you might enjoy an assignation or ‘rest undisturbed.’ Other entertainment included bridge parties, dancing, lectures, and a gleeful ‘community sing.’

Although the ship could carry up to 2200 passengers, this excursion was limited to just 450 travelers who were assigned to only the largest and most well-appointed cabins on board. In the promotional brochure, guests were assured a top-tier experience: ‘Elegant manners, eloquent conversation, fancy dress balls, and a joyful desire to discover came together to define a classic voyage.’

On 6 December, the promised fancy dress ball came to pass: 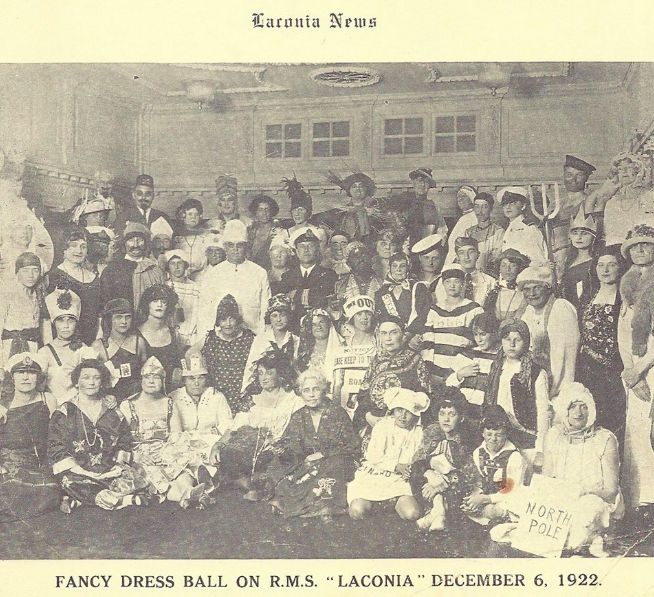 An article dated 30 January 1924 from the Malaya Tribune reported that the Laconia’s passengers took home reminders of their days abroad: ‘Besides the usual quantity of silks and satins, lacquer and china and damascene, pottery and rugs and furniture, the Laconia party left Batavia [modern Jakarta] with twelve show puppies, six parrots, ten cages, each of which contains from two to six love birds, all manner of song birds, six monkeys, and a pair of Pomeranians…’

Thanks to one young passenger, a Miss Eleanor Phelps Wilds of Teaneck, New Jersey, we have a day-by-day account of the voyage, written in her own hand.

In the winter of 1921, Eleanor Phelps was 26 years old and unmarried. She was an experienced traveler; her family had gone abroad in 1912, and she’d kept a short diary then, too. But the two-volume scrapbook she created on this trip is a masterpiece of first-person observation. Her handwritten entries of each day’s excursions are illustrated with personal photographs, local currency, news clippings, maps, postcards, and printed materials from Cunard.

The first page of the scrapbook is inked with this request: PLEASE TURN PAGES CAREFULLY followed by S.S. Laconia, Room B-9. The early pages capture the excitement of boarding the ship with black-and-white photos of the Laconia, the New York City skyline, and a fur-clad Eleanor with her traveling companions, including her mother. 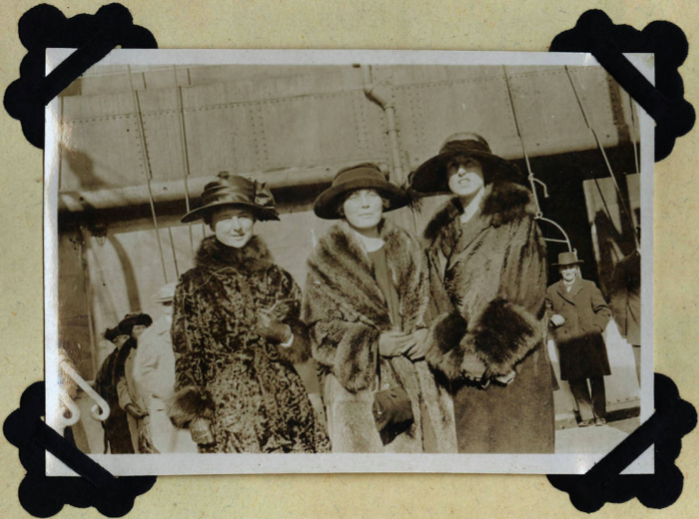 Eleanor begins her diary with these words: As a record of events this will doubtless be inadequate because a diary to be amusing or interesting should not indulge in rhapsodies about unrelated happenings, but should stick mainly to ‘straight narrative.’ That I can never do, so the brave few who wish to peruse its many pages, won’t get much reward for their diligence.

She then spends hundreds of pages disproving this statement with engrossing descriptions of the places and people she encountered on the trip.

In Cuba, on the sea wall: There is a north wind blowing in big combers which broke on the coral rock outside the wall and cause roaring straight at us, all green and white, with Morro Castle across its entrance to the harbor… great white clouds blowing across a very blue sky and a sea as blue as any Maxfield Parrish painting…

In Benares, India (now Varanasi) at a bathing festival: We saw a holy man facing the east, his eyes staring straight into the rays of the blazing sun. We saw women exquisitely dressed in gold saris and glorious white silks bathing with the same simplicity as the most ragged of the pilgrims — an incredible, chaotic, fascinating, moving place — the heart of India and the soul of the Hindu, laid bare before your eyes. 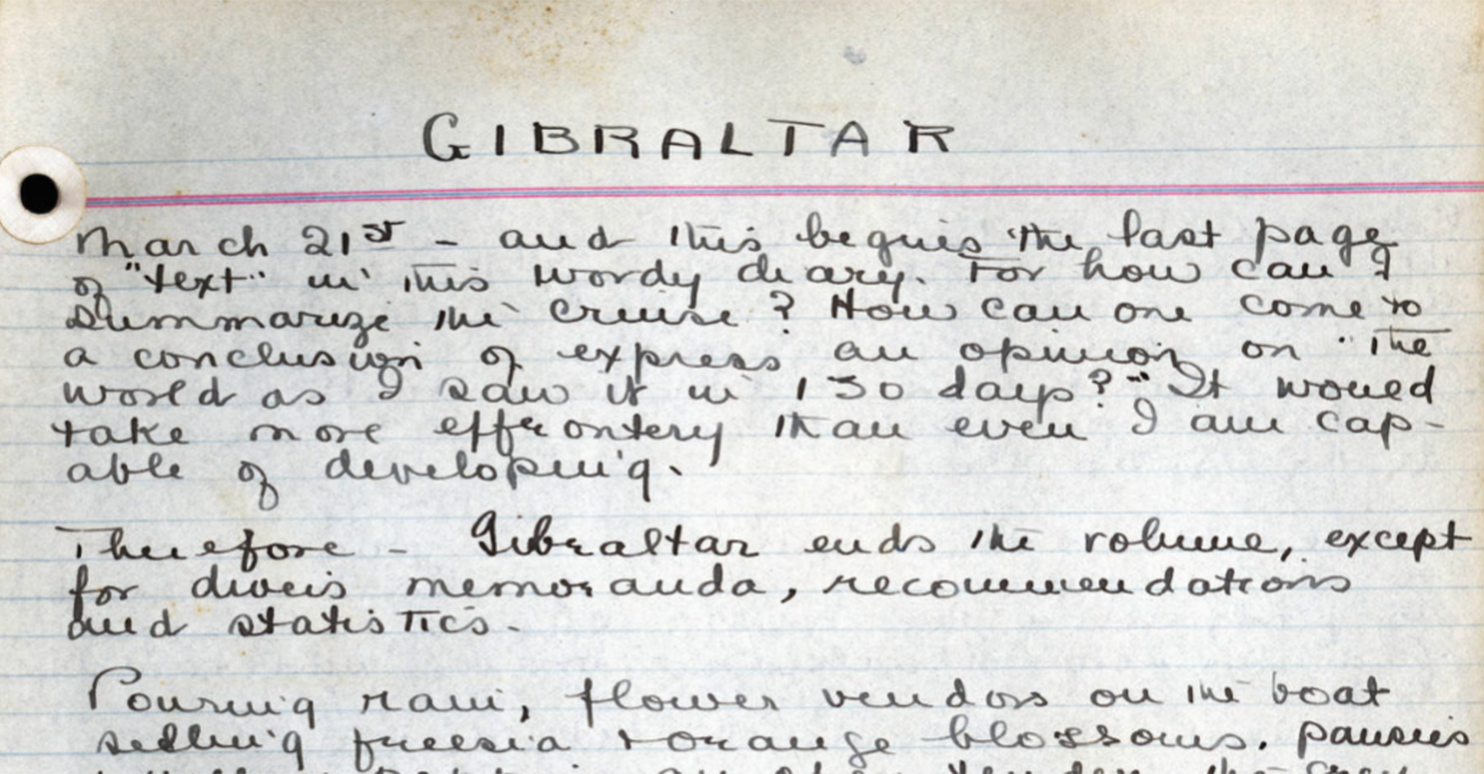 At Gibraltar, the last port of the voyage: We sailed soon after 6 and passed out to sea, Africa’s four lighthouses to port, and the rusty shores of Europe fading into blackness on the starboard side. Our next land will be America, the anchor will next go down at Quarantine and we will be home — or so nearly home after all that we’ve seen and done that it seems impossible… One hundred and thirty days well spent and a circle made which is the largest one can make “on this mortal sphere.”

Six months after returning from her world tour, Eleanor married Robert Henry Wilds, a doctor from Aiken, South Carolina. She became stepmother to his two children, urging them to call her Marni, and then had two sons of her own. In 1958, she was named ‘Woman of the Year’ by the Aiken Chamber of Commerce, and she died 23 January 1967, leaving 11 grandchildren and two great-grandchildren in her wake.

Young Eleanor could have had no inkling that almost a century later, we’d be enjoying the photos and memories of her trip around the world. We’re grateful to Eleanor and the University of South Carolina for sharing this record with the world.

View the scrapbook of Miss Eleanor Phelps Wilds in its entirety.

*Our gratitude, also, to Helen Davey, Ph.D. for her blog posts about her father’s trip on the Laconia.

Sing a Song of the Sailor: Everything You Need to Know About Sea Shanties

Once you've heard a crew singing 'Roll the Old Chariot,' you'll not forget it. Sea shanties are infectious — and they served an important function aboard ship. We've got the backstory on this charming nautical art form.