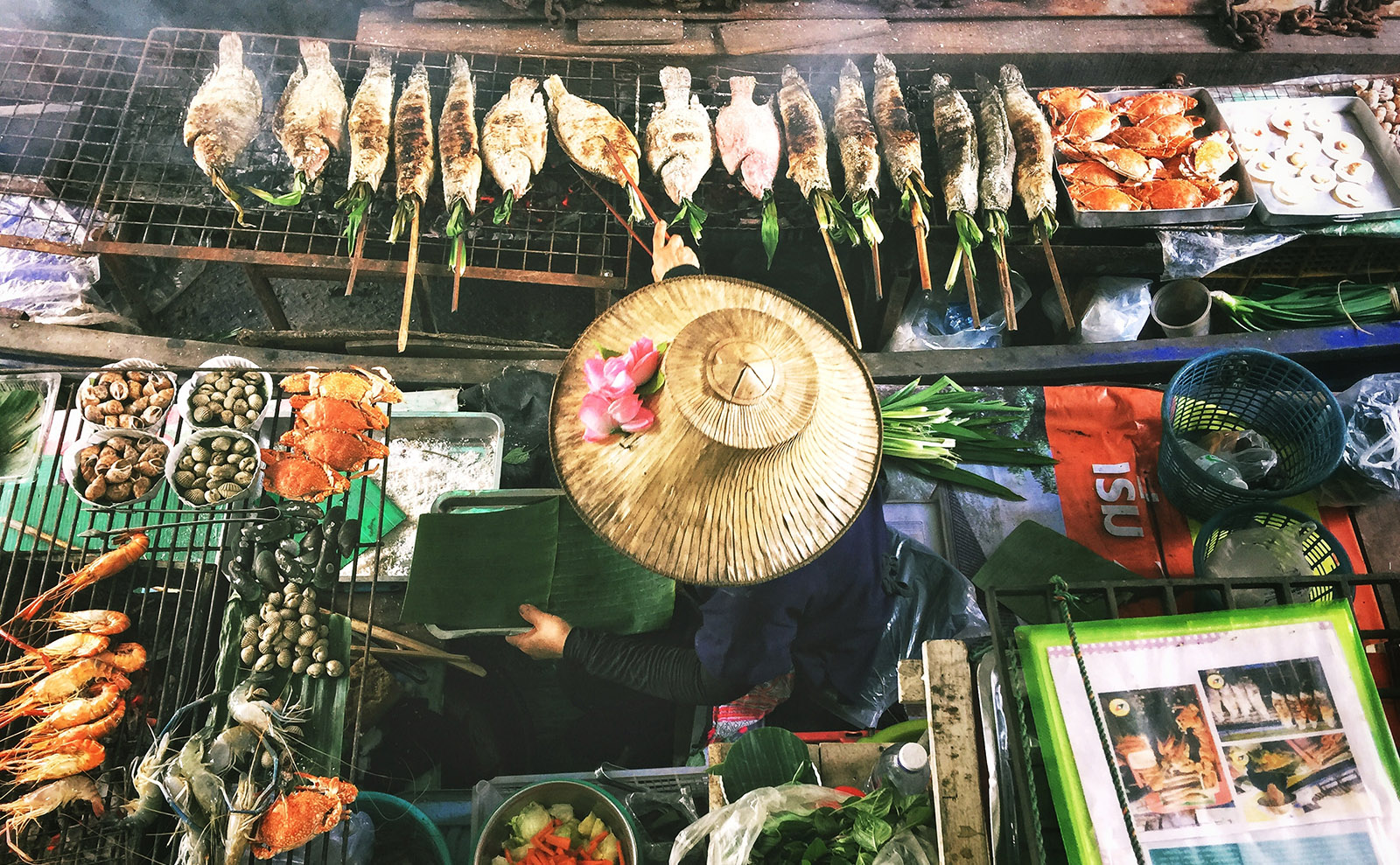 International Street Food: Let's Eat Our Way Around the World

Yes, we enjoy a meal once in a while that requires grown-up clothes and a table booked in advance. But between us friends, let’s be honest: Street food is the best food.

Some of the most memorable things we’ve eaten have been wolfed on a windy street corner, at a standing table engulfed in a steamy cloud of hot grease and garlic, or perched on the edges of a bench in the sun, elbow to elbow with other food lovers.

There’s nothing like that little trickle of orange grease escaping from a bubbling slice of street pizza in New York. Or the I-can’t-wait-anymore sugar rush of the first lick of an ice cream cone on a hot day. A baguette in a crinkly paper sleeve, still hot from the oven in Paris. A corn tortilla that just came off the griddle in Mexico. The crispy, charred ends of BBQ brisket in Texas. These are the things that tasty memories are made of.

Al pastor tacos — from the Spanish for shepherd style — are made from spit-grilled pork in a fresh corn tortilla, topped with minced onion and cilantro. Based on shawarma brought to Mexico by Lebanese immigrants in the 1930s, this now-classic taco combines the flavor profiles of these two far-flung locales. {recipe}

Arepas are grilled flatbread made from corn or flour, topped with butter, cheese, eggs, chorizo, or a cumin-infused onion sauce called hogao. Arepas are a pre-Columbian food that was eaten daily by the indigenous peoples of the area that’s now Colombia and Venezuela. And both cultures claim it as their own. {recipe}

On the cobblestone streets of Cartagena, ears of corn — a.k.a., Colombian Mazorca — are shucked and charred over charcoal on a portable brazier before being slathered with sweet butter and salt. {recipe}

Soft serve ice cream was invented in the U.S. in 1934 by Tom Carvel. A flat tire on his ice cream truck required him to sell his haul of almost-melting ice cream asap. Two years later, he opened his first Carvel store on the spot where his truck broke down. Now, this airy, creamy dessert is a staple at carnivals, fairs, amusement parks, and boardwalks around the world. {recipe}

The first nachos were crunched in the 1940s, in Piedras Negras, Mexico, a town just across the border from Eagle Pass, Texas. The wives of U.S. soldiers stopped into the Victory Club restaurant after closing, so the maître d’hôtel — Ignacio ‘El Nacho’ Anaya — made them a snack from what he had on hand: tortillas and cheese. The fried tortillas with toppings were a hit, and when the women asked what the dish was called, he named them after himself: Nacho’s especiales. {recipe}

In the mid-19th century, a wave of German and Czech settlers emigrated to Texas, and they brought their meat-smoking traditions with them. Not only was barbecued meat flavorful, but the smoking process allowed the meat to be stored longer without spoiling. Soon, barbecue became synonymous with Texas. In 1964, President Lyndon B. Johnson hosted a state dinner for the Mexcian president, and barbecue was on the menu — the first BBQ state dinner in U.S. history. {recipe}

Punk rocker Henry Rollins said ‘Pizza makes me think that anything is possible.’ And it could be argued that the pizza in New York City is the best in the world; theories on why that’s the case abound. {recipe}

Although the egg waffle originated in Hong Kong and Macau, it’s become a bit of a thing in London, thanks to Bubble Wrap. The sweet, airy waffle is crispy on the outside, fluffy on the inside, and then loaded up with ice cream and toppings. {recipe}

The sweet aroma of these caramelized nuts hovers over the streets of London, from the Tower to the Tate Modern and the bridges that span the Thames. Tossed in an open-air cauldron with vanilla and sugar, then kept warm on a piping hot metal griddle, they’re crunchy, sweet, and fatty with just a touch of salt. {recipe}

Whether you call them french fries, chips, or pommes frites, sometimes you just need a pile of perfectly fried and salted potatoes. French fries as we know them originated in Belgium, not France. But the story really begins in South America. Spaniards brought potatoes to Europe after marauding in Colombia, circa the mid-1500s. Fast forward a few hundred years, and the Belgians cut the spuds into strips and fried them. During WWI, American soldiers stationed in Belgium dubbed the potatoes ‘french fries’ because the official language of the Belgian army was French. The name and the affection for them stuck. Brits call them ‘chips’ because they’re made from chips of potato. Although one internet user proclaims that British people refer to fried potatoes from McDonald’s as fries to differentiate them from ‘proper chips.’ What’s really important is that Belgian frites are the crispiest because they’re double-fried. {recipe}

Follow the scent of vanilla wafting through the air to a crepe cart in Paris. Ridiculously delicious in their simplicity, they can be folded over a light filling of lemon and sugar or dolled up with luscious chocolate. Once, before an epic nighttime bike tour in Paris, we enjoyed a crêpe complète from a cart under the Eiffel Tower: a crepe folded over a filling of ham, cheese, and an egg that was rolled into a cone filled with french fries and topped with a hot dog. Complete, indeed. {recipe}

In post-war Berlin — 1946, to be exact — a German woman named Herta Heuwer traded a British solider some adult beverages for a bit of ketchup and curry powder. Soon, Berliners were eating currywurst all over town. At its most basic, it’s a pork sausage (bratwurst) cut into bite-sized chunks and doused with ketchup that’s been doctored-up with Indian curry powder. Important to note: It’s almost always served alongside a massive pile of fries. {recipe}

Although churros are wildly popular in Mexico and the U.S., they were (maybe) the invention of Spanish shepherds and were named for the ridged horns on their Churra sheep. Crispy on the outside and airy in the middle, churros are clouds in edible form. Don’t skip the dark chocolate sauce for dipping. {recipe}

Fried rye bread rubbed with garlic is a pub-snack staple in the Czech Republic and Slovakia. Crispy, fatty, garlicky, salty — it hits every pleasure center between the tastebuds and the brain. This photo is of the man we call Pan Topinka (Mr. Toast). He makes this magical treat on Saturday mornings at the farmers market along the Vltava River in Prague. One piece will set you back 20 Czech crowns — about 85 U.S. cents — and it’s the best buy in all of Prague. {recipe}

An ancient symbol of fertility and love, pomegranate is one of the seven species of Israel listed in the Torah, along with wheat, barley, grapes, figs, olives, and dates. Pomegranates have been grown in Israel for thousands of years, and when they’re in season, street markets are flush with fresh-squeezed juice and cups of the seeds that glisten like edible rubies. {how to remove pomegranate seeds}

Falafel are simply delicious: crunchy deep-fried chickpea balls, stuffed in a pita with salad, pickled vegetables, hot sauce, and tahini sauce. But the history is not so simple. The dish most likely originated in Egypt, but Israelis, Palestinians, Lebanese, and Yemenis all claim it as their own. Get the full story. {recipe}

Bánh mì is the Vietnamese word for bread, and this epic sandwich is a fusion of Vietnamese and French cuisines. French colonists brought the baguette to Vietnam in the late-19th century. Typically Vietnamese ingredients like pork, cilantro, and pickled carrots and daikon were merged with French pâté and mayonnaise. This sandwich is now so ubiquitous, bánh mì was added to the Oxford English Dictionary in 2011. {recipe or this one}

Onion bhaji is what would happen if an American onion ring went on a tour of India and fell in love with spices. Its crispy coating, fragrant spices, and sweet onions make it one of the most popular starters in Indian restaurants all over the world. In this photo, a vendor fries fresh bhaji in a vegetable market. {recipe}

If you could travel anywhere for a bite to eat right now, where would you go?

Treat yourself to a recipe for homemade Chicago-style hot dogs! It's an all-beef dog 'dragged through the garden' with colorful toppings for a taste explosion, inspired by Erik Larson's brilliant romp through history.