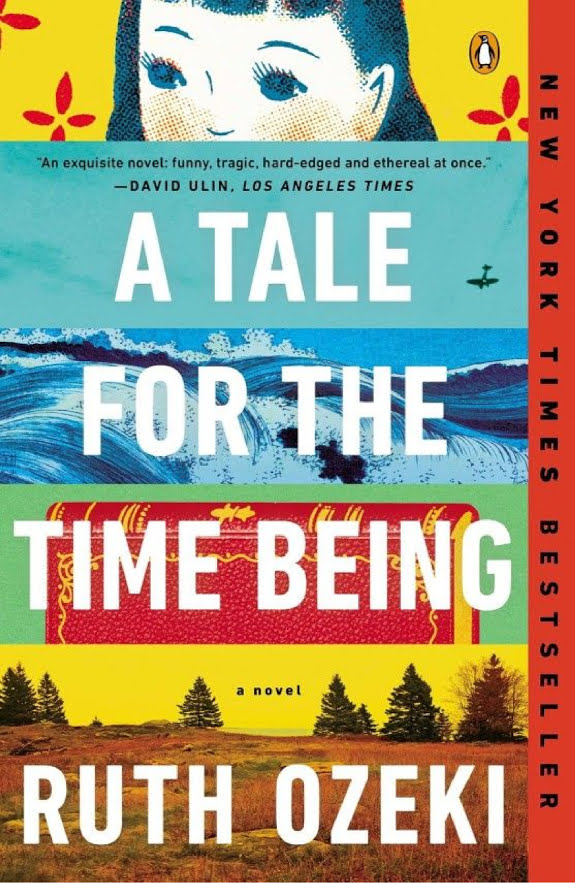 This coming-of-age story (432 pages) was published in March of 2013 by Penguin. The book takes you to Japan and British Columbia, Canada. Melissa read A Tale for the Time Being and loved it; it wouldn't be on our site if she didn't recommend it.

A Tale for the Time Being

Prepare to meet three amazing women: a 16-year-old in Tokyo, a middle-aged Japanese-American in British Columbia, and a Zen Buddhist nun, who also happens to be 104 years old and an anarchist. They populate a story that’s all about the small moments that add up to the meaning of life.

Ruth is a former New Yorker now living in rural Canada. One day, she finds a mysterious diary and letters inside a Hello Kitty lunchbox on the beach — part of the detritus from the 2011 tsunami that struck Japan. Soon, she’s deep into the confessions scrawled in the journal that’s hidden inside the covers of a copy of Proust’s In Search of Lost Time. Its author is Nao (pronounced ‘Now’), a teenager living in Tokyo. She’s bullied, lonely, disillusioned, and emotionally abandoned by her father, and the reasons for all of this slowly become clear via her diary entries.

The only person in her life who doesn’t let her down is her elderly great-grandmother (and radical feminist) Jiko. She lives in a Zen temple on a mountain and delivers delightful moments of levity and beauty to the narrative. ‘[O]ne of her superpowers,’ Nao says, ‘is that just by being in the same room with you, she can make you feel okay about yourself.’

As Ruth reads Nao’s words on the other side of the ocean, she slowly grows attached to the girl, even though their relationship is out of sync — the events Ruth experiences in the present are the plot points of Nao’s past. So what is happening to Nao now?

Darkly funny, unabashedly sad, and often surprising, this novel winds the narratives of Nao and Ruth around each other and embellishes them with six appendices and dozens of chatty footnotes. These personal stories play out against a background of familiar but still-exotic Japanese imagery: kamikaze pilots, a magical crow, Japanese ghosts, school uniforms, cos-play cafés, and family honor.

Mystery, coming-of-age tale, family saga; this novel is a moving examination of the various meanings of time and how we choose to spend our precious days.

Old Jiko is super careful with her time. She does everything really really slowly, even when she’s just sitting on the veranda, looking out at the dragonflies spinning lazily around the garden pond. She says that she does everything really really slowly in order to spread time out so that she’ll have more of it and live longer, and then she laughs so that you know she is telling you a joke. — Ruth Ozeki

This story travels back and forth in time and place with a pleasingly dizzying effect. Set in the forests of British Columbia, modern Tokyo, and a timeless monastery, it's challenging, entertaining, and impactful.