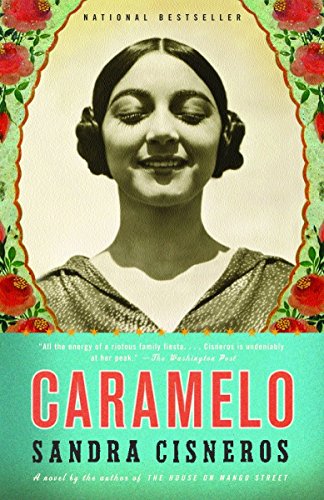 This family saga (464 pages) was published in September of 2003 by Vintage. The book takes you to Mexico City, Chicago, and San Antonio, Texas. Melissa read Caramelo and loved it; it wouldn't be on our site if she didn't recommend it.

This is a sweeping, multi-generational family saga that vividly recreates family life in Mexico City, Chicago, and San Antonio. Its story of one eventful summer — and the ripple effects of the aftermath — explores how family mythology is created from love and loss and lies and secrets.

This tale is carefully woven together to tell stories within stories that spiral and twist into intricate patterns as a web does — and as families do. Its focus is the members of the Reyes family: our heroine and narrator Lala; her mother, father, and six older brothers; assorted aunts, uncles, and cousins; and the Little Grandfather and Awful Grandmother. (You’ll meet a lot of characters with nicknames they’ve earned the hard way.)

When we’re introduced to Lala, she’s gearing up for the family’s annual road trip from Chicago to Mexico City. She often gets lost among her boisterous, overwhelming relations, and she turns inward rather than fight for attention.

She’s a sharp observer, and we see the places she visits north and south of the border with precise and delighted attention to detail: ‘Churches the color of flan… The corn on the cob vendor. The pork rind vendor. The fried banana vendor. The pancake vendor. The vendor of strawberries and cream. The vendor of rainbow pirulis, of apple bars, of tejocotes bathed in caramel. The meringue man.’

There’s a touch of magical realism— and the characters often have a loose relationship with the truth — so the individual stories within the narrative take on the sheen of fairy tales. As Lala matures, she comes to see how the women in her life cling to their past hurts and resentments like heirlooms. To break out of this family curse, Lala must understand how the people she loves became the people that they are.

The detailed descriptions of street scenes and intimate conversations traverse a spectrum that begins at a lot, continues through almost too much, and finally comes out the other side at just right. The main text is supported by a wealth of footnotes that act as a Greek chorus, adding detail and lightening the mood when the emotions run deep. There are also delightful appearances by real-life people and places, including the glamorous 1940s actress Yolanda Montes (known as Tongolele) and Mexico City’s Café de Tacuba.

The truth, these stories are nothing but story, bits of string, odds and ends found here and there, embroidered together to make something new. I have invented what I do not know and exaggerated what I do to continue the family tradition of telling healthy lies. If, in the course of my inventing, I have inadvertently stumbled on the truth, perdónenme. — Sandra Cisneros

Our heroine Lala is an astute observer. She'll take you on a virtual trip to Mexico City. You'll smell the corn roasting, hear the music dance in the air, and get caught up in all kinds of (excellent) family drama.