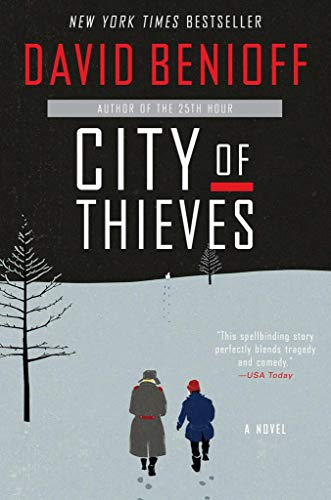 This historical novel (284 pages) was published in May of 2008 by Penguin. The book takes you to WWII Leningrad, Russia. Melissa read City of Thieves and loved it; it wouldn't be on our site if she didn't recommend it.

This sweet and suspenseful novel is almost a buddy comedy — except the action takes place during the 872-day siege of Leningrad in 1941. Our intrepid heroes form an unlikely friendship, develop dangerous enemies, argue about life, and get lost in the snow — all while in search of a perfect dozen eggs.

In real life, on September 8, 1941, the German army surrounded Leningrad (now St. Petersburg) and cut it off from the rest of Russia. This story picks up a year later, as the city’s resident waste away from nightly bombings and dwindling food supply.

Amid this horror, fate seems to have taken a particular dislike to 17-year-old Lev Beniov. For one thing, he’s Jewish and, times being what they were, that was not a good thing to be. And for another, he’s hungry — starving, in fact. When an unusual event tempts Lev and his childhood friends into looting a corpse — a crime against the State even in wartime — he’s chucked into a jail cell with Kolya, a handsome soldier, just 20 years old and accused of desertion.

The next morning, a Soviet colonel makes the boys an offer they literally cannot refuse: find a dozen eggs. His daughter — beautiful, well-fed, fur-wrapped — is to be married in a week, and her parents wish her to have a proper wedding: ‘This is a tradition, says my wife, we need a cake. It is terrible luck, a wedding with no cake.’

Lev and Kolya, forced into an uneasy partnership, resign themselves to their fate: eggs or death, with the latter the most likely outcome. They scour the city, and then — driven by desperation — sneak through the blockade to continue their quest behind enemy lines.

This story is alternately funny and heartbreaking, exhilarating and unsettling — a vivid look at the messy and frantically alive moments of war, growing up, and enduring friendship.

You have never been so hungry; you have never been so cold. When we slept, if we slept, we dreamed of the feasts we had carelessly eaten seven months earlier — all that buttered bread, the potato dumplings, the sausages — eaten with disregard, swallowing without tasting, leaving great crumbs on our plates, scraps of fat. In June of 1941, before the Germans came, we thought we were poor. But June seemed like paradise by winter. — David Benioff