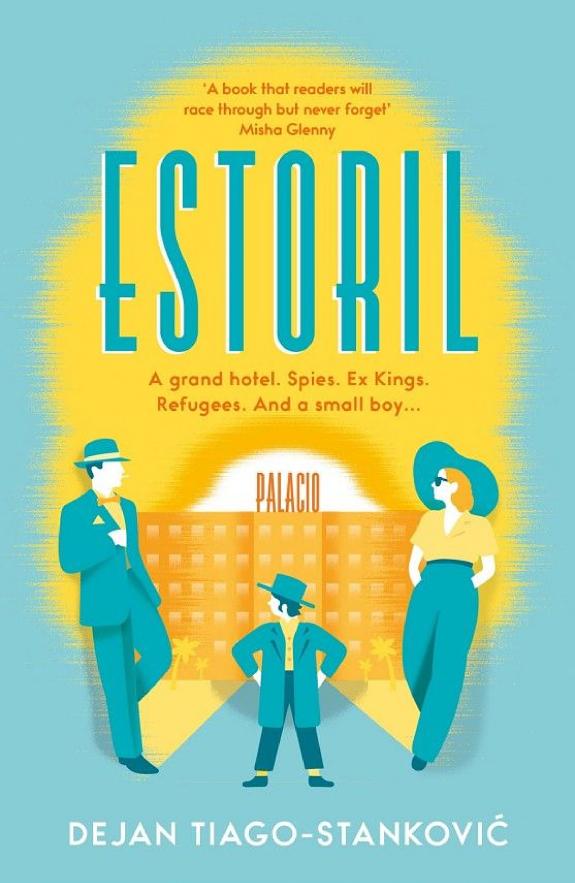 This charming historical novel (352 pages) was published in October of 2019 by Apollo. The book takes you to WWII Lisbon, Portugal. Melissa read Estoril and loved it; it wouldn't be on our site if she didn't recommend it.

This charming, affecting novel tells the interwoven stories of the guests at the luxurious Hotel Palácio Estoril in Portugal during WWII. At its heart is the friendship between 10-year-old Gaby and Mr. Black, the ever-so-proper hotelier.

During the War, Portugal remained neutral while the rest of Europe was ablaze. This made it a getaway for a privileged few whose wealth allowed them to hide from reality for a while, along with the other human flotsam that washed up on the sunny shores: spies, pilots, princes, and other people of talent, if not integrity.

Our hero Gaby is a young exile sent to the hotel’s relative safety by his Jewish parents, desperate to get beyond the reach of the Nazis. When the hotelier Mr. Black meets Gaby, he breaks all of his own rules about propriety, allowing the serious and besuited little boy to take up residence in a hotel room. Soon, Gaby is ‘adopted’ by the staff and guests as they ride out the war together.

Dejan Tiago-Stankovic — born in Belgrade, Yugoslavia, and now a naturalized citizen of Portugal — tells a tough story with a light touch. The fictional characters who become Gaby’s found family share the elegant spaces of the hotel with real-life historical figures, including British agent Ian Fleming, Russian chess grandmaster Alexander Alekhine, the famous Polish pianist Jan Paderewski, and French writer (and pilot) Antoine de St Exupery. It’s a fantastical and whimsical way to move the story forward, a respite from the bleak reality of wartime. Tiago-Stankovic’s prose is descriptive and lyrical; the translation by Christina Pribichevich-Zoric is smooth and lush. You’ll feel the soft breeze rolling in from the beach, hear the clink of champagne glasses in the cocktail lounge, and fervently wish for a mentor like Mr. Black in your life.

Pssst… This novel is like a mashup of the films Casablanca (well-off refugees from the war killing time until life is ‘normal’ again) and The Grand Budapest Hotel (quirky characters that steal and break your heart) in book form. It makes for a very satisfying book pairing with A Gentleman in Moscow for two distinct looks at life inside a hotel during WWII.

When you approach Lisbon from the sea, just before the boat turns into the river, to the left, in the background, you will see a bluish mountain. That is Sintra. It blocks the path of the rain clouds, and as a result, Estoril offers visitors more hours of sunshine than any other resort in Europe. At least so says the tourist brochure for the ‘Sunshine Coast’… Perched among its palm trees, cypress trees, and variegated bushes, is the famous resort’s biggest attraction: the Grand Casino Estoril. Right next to it is a white, three-story building, its windows offering stunning views of the park and ocean. And on top of its dark roof is a big sign saying: HOTEL PALÁCIO. — Dejan Tiago-Stankovic