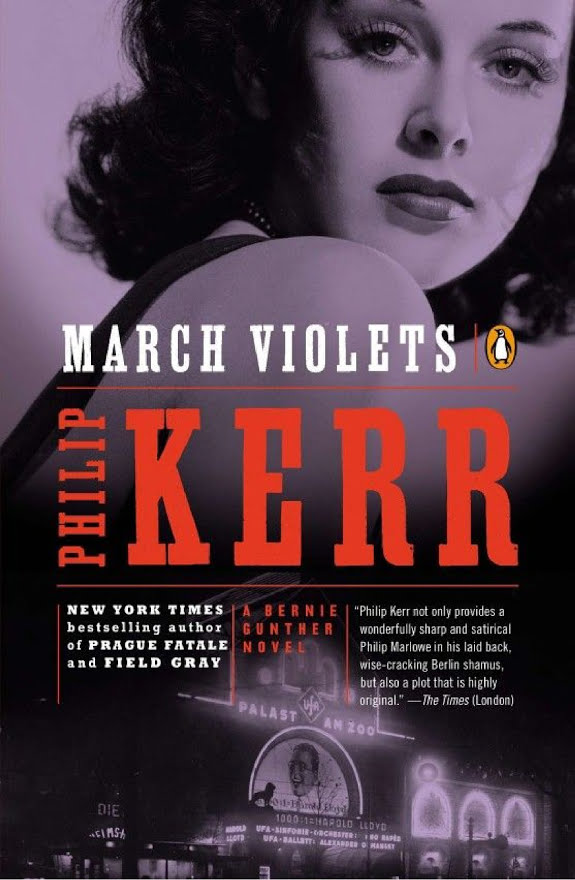 This noir historial thriller (256 pages) was published in July of 2004 by G.P. Putnam's Sons. The book takes you to 1930s Berlin. Melissa read March Violets and loved it; it wouldn't be on our site if she didn't recommend it.

Meet Bernie Gunther, an ex-policeman in WWII-era Berlin. He’s a mostly well-intentioned detective with a high close rate, a wry sense of humor, and a weakness for damsels in distress.

No one doubts Gunther’s abilities, and therein lies the problem: His drive to uncover the truth almost always outweighs his sense of self-preservation. When Nazis, politics, secrets, and powerful men are involved, some mysteries are better left unsolved.

This is the first installment in Philip Kerr’s 14-novel series. It’s a hard-hitting introduction to his black — and sometimes bleak — version of 1930s Berlin. Gunther pines for the Weimar Republic of his younger days; he mourns this new fascist-infested era, even as he averts his gaze from crimes that trouble his conscience.

Now that he’s severed his official ties to the Kripo, Berlin’s police department, Gunther is a private detective whose specialty is tracking down missing persons, especially Jews, who are disappearing at an epidemic rate. When the daughter and son-in-law of one of the city’s wealthiest men are murdered during a robbery, Gunther is hired to find the killer and the missing diamond necklace.

Soon, he’s up to his hat brim in Nazis, including Hitler’s lethal sidekicks: Goering and Himmler. Gunther’s dogged need to expose the conspiracy leads him to dangerous places, including Berlin’s heady nightclub scene, a run-in with Nazi super-villain Reinhardt Heydrich, the Olympic Games starring Jesse Owens, and a tumble in the sheets with a famous actress, as well as shoot-outs, fisticuffs, and verbal sparring that culminate in his stay at the infamous Dachau concentration camp.

Bernie is a scrappy fighter, an attentive lover, sarcastic in the face of danger, and foolishly brave when he should cut and run. It’s a complicated life he leads, and it’s a gift to be able to join him for the ride.

Berlin. I used to love this old city. But that was before it had caught sight of its own reflection and taken to wearing corsets laced so tight that it could hardly breathe. I loved the easy, carefree philosophies, the cheap jazz, the vulgar cabarets and all of the other cultural excesses that characterized the Weimar years and made Berlin seem like one of the most exciting cities in the world. — Philip Kerr