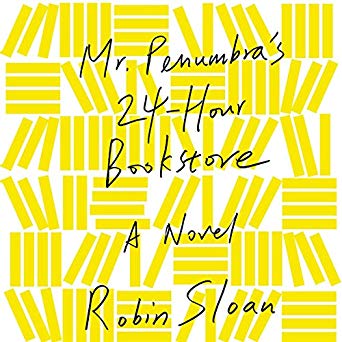 This book-lover's novel (7 hours and 41 minutes) was published in October of 2012 by Macmillan Audio. The audiobook takes you to San Francisco and NYC. Melissa listened to Mr. Penumbra's 24-Hour Bookstore and loved it; it wouldn't be on our site if she didn't recommend it.

With his flexible, energetic performance, narrator Ari Fliakos — Audible’s narrator of the year for 2017 — imbues Clay with just the right tone of optimism and anxiety. His dynamic voice acting brings all of the characters to vivid life — Mr. Penumbra, in particular, is equal parts charm and mystery.