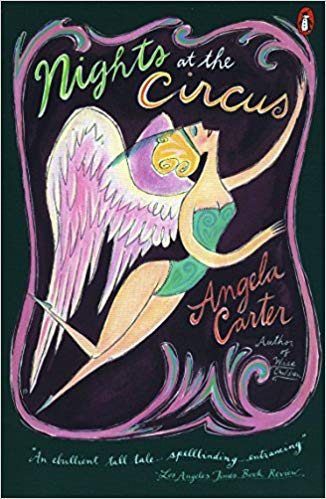 This historical fantasy fiction (304 pages) was published in March of 1986 by Penguin. The book takes you to a Victorian circus. Melissa read Nights At The Circus and loved it; it wouldn't be on our site if she didn't recommend it.

Heads up: We also love the audiobook, narrated by British actress Adjoa Andoh. It makes the quirky cast of characters feel all-too-real. Fevver’s voice is a blend of cockney and theater that clangs ‘like dustbin lids,’ and Andoh’s interpretation is enthralling.

Her native city welcomed her home with such delirium that the Illustrated London News dubbed the phenomenon Fevvermania. Everywhere you saw her picture; the shops were crammed with ‘Fevver’s garters, stockings, fans, cigars, shaving soap…She even lent it to a brand of baking powder; if you added a spoonful of the stuff, up in the air went your sponge cake, just as she did. Heroine of the hour, object of learned discussion and profane surmise, this Helen launched a thousand quips, mostly on the lewd side. (‘Have you heard the one about how Fevvers got it up for the traveling salesman…’) Her name was on the lips of all, from duchess to costermonger: ‘Have you seen Fevvers?’ And the: ‘How does she do it?’ And then: Do you think she’s real?’ — Angela Carter

You ever have one of those nights where you meet an eccentric stranger and while away the hours listening to outrageous stories over cocktails? This novel is the literary equivalent of that — with a shot of absinthe.

Every Friday, we share our favorite book- and travel-related links. This week, we've got a stellar bakery in Madrid, pairing tea and classic British novels, a magical dragon boat, the dogs of Kars, Turkey, and more.