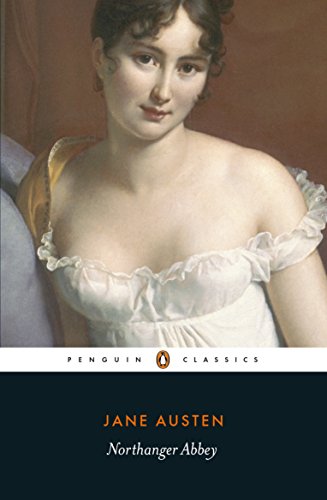 This Austen classic (354 pages) was published in October of 2006 by Cambridge University Press. The book takes you to Regency England. Melissa read Northanger Abbey and loved it; it wouldn't be on our site if she didn't recommend it.

Diehard Austen fans will warn that this Gothic-inspired, coming-of-age story is an atypical novel for Jane Austen — and that’s one of the reasons we love it. It’s so delectably off-brand.

The author of beloved favorites like Pride and Prejudice and Emma loved reading Gothic novels, including Ann Radcliff’s The Mysteries of Udolpho, a sprawling tale about a young woman locked away in an Italian castle by a ne’er-do-well brigand.

With this book, Austen lovingly satirizes the tropes of the Gothic frenzy of the time, while also giving us an indelible character in Catherine Morland: devoted reader, sweet-tempered naïf, and possessor of a dangerously vivid imagination.

Her story begins in Bath, where she muddles through the de rigeur social scene and bumbles into a potentially romantic situation with Henry, scion of the dignified Tilney family. Austen brings the snarkiness of the Bath social scene to vivid life; you can feel the ennui-inducing grind of the sameness of the days. It’s no wonder Catherine wants to disappear into a sensationalist novel.

When Henry invites Catherine to visit his family’s estate of Northanger Abbey, her imagination runs amok, and she halfway hopes that all of her shadowy Gothic dreams are about to come true. The abbey — complete with library, drawing room, and a dining room staffed by footmen — is just what she’d hoped.

But as Catherine soon learns, while it may be true that ‘the person, be it gentleman or lady, who has not pleasure in a good novel, must be intolerably stupid,’ it’s necessary to keep one’s book-inspired fantasy life in check.

The lock yielded to her hand, and luckily with no sullen sound that could alarm a human being. On tip-toe she entered; the room was before her; but it was some minutes before she could advance another step. She beheld what fixed her to the spot, and agitated every feature. She saw a large well-proportioned apartment, a handsome dimity bed, unoccupied, arranged with a housemaid’s care, a bright Bath stove, mahogany wardrobes, and neatly painted chairs, on which the warm beams of a western sun gaily poured through two sash-windows. Catherine had expected to have her feelings worked, and worked they were. Astonishment and doubt first seized them, and a shortly succeeding ray of common sense added some bitter emotions of shame… She was sick of exploring, and desired but to be safe in her own room with her own heart only privy to its folly. — Jane Austen

Every Friday, we share our favorite book- and travel-related links. This week, we've got the beach in winter, vampire and Gothic novels, chocolate bars inspired by classic lit, Goodreads vs. Storygraph, and more.

Sure, you could read a novel that takes the Gothic tropes seriously: shadowy manor house, unexplained bumps in the night, dark-as-pitch family secrets. Or you can revel in Austen's tongue-in-cheek approach instead.