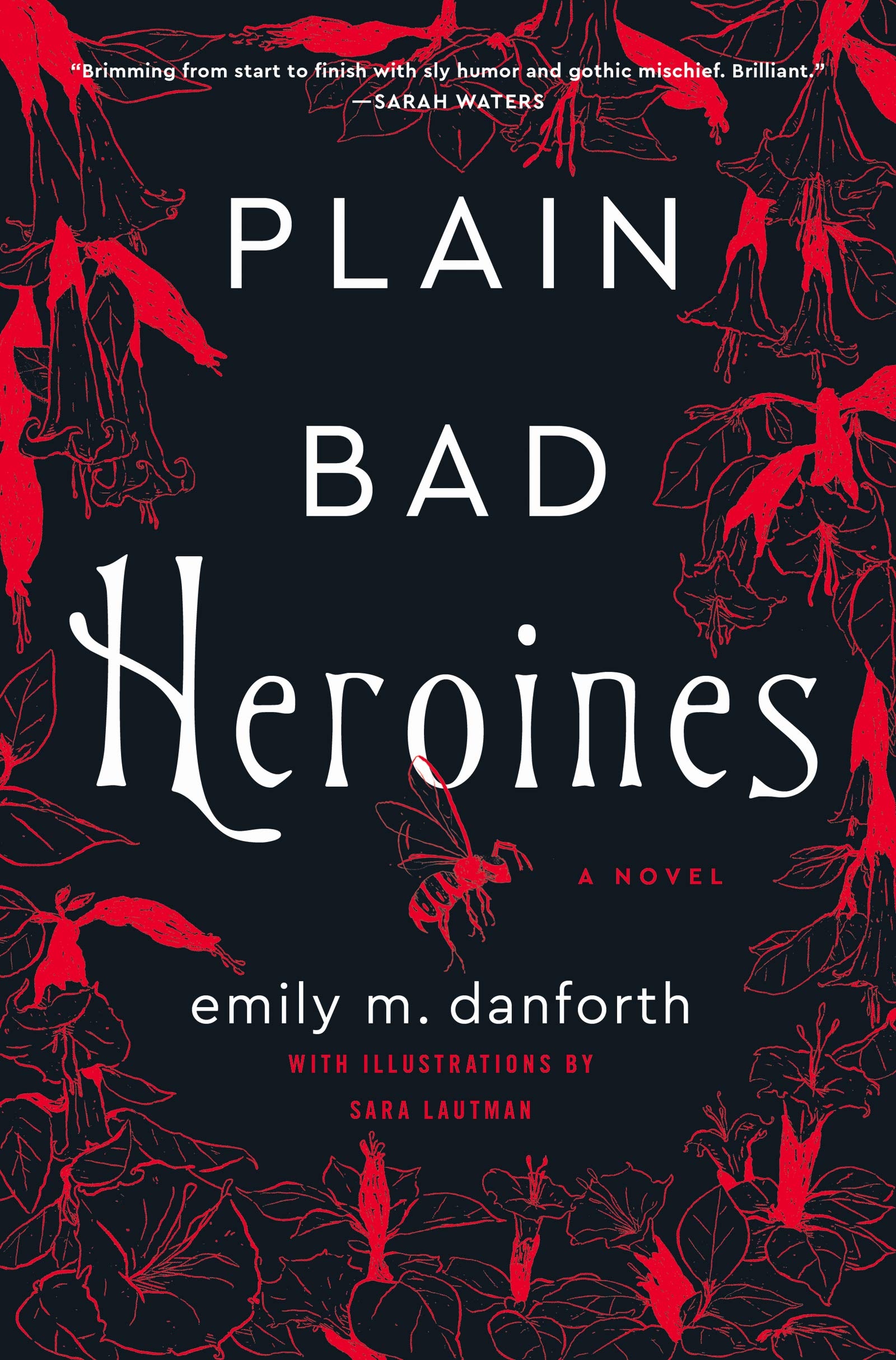 This sexy, sapphic Gothic haunted house novel (640 pages) was published in October of 2020 by William Morrow. The book takes you to modern Hollywood and 1900s Rhode Island. Melissa read Plain Bad Heroines and loved it; it wouldn't be on our site if she didn't recommend it.

The story begins in 1902 when we meet Clara and Flo, students at Brookhants School for Girls. They are completely infatuated with each other and with the author Mary MacLane. Or, more specifically, her book The Story of Mary MacLane, a sensual, self-aware memoir that highlights Mary’s attraction to women. (In real life, MacLane’s memoir sold 100,000 copies in its first month in print.)

So taken with this book, our girls create a secret club: The Plain Bad Heroine Society.

One afternoon, whilst enjoying a romantic tryst in the orchard, dear Clara and Flo are attached and killed by swarming yellowjackets. Over the next few years, there are a few more deaths, and the school gets a reputation for being both cursed and haunted. So far, so Gothic.

Fast forward to our modern times: The school has become the set for a movie based on the Brookhant’s story. And three modern young women get caught up in a delightfully sexy, messy relationship. We meet the ridiculously named Harper Harper, famous actress and lesbian it-girl… another actress who’s the daughter of a former Scream Queen and is herself a former child star, trying to make an adult comeback; and the author of the book on which the film is based. All of them have something to prove. All of them have issues with a capital I. It’s fantastic.

The threads of the 1902 story and the modern story continue to intertwine as we follow the three women and their experiences making the film. There are strange happenings afoot: Is the set haunted? Are they hallucinating? Are pranksters merely making up supernatural happenings? Read on to find out!

A bit snarky and self-aware, Emily M. Danforth’s prose is sharp, entertaining, and unputdownable. It’s also embellished with charmingly sarcastic footnotes and a narrator who addresses the reader from time to time in arch Victorian fashion.

The story is set in a beachside village in Rhode Island (the atmosphere of crashing waves! the maybe-cursed school rooms!) and Hollywood (bold ambition! social media!). Equal parts Gothic horror, love story, a send-up of Hollywood, and good old-fashioned storytelling, sentences like this one — ‘There was that in the air which is there when something is going to happen.’ — make this novel utterly irresistible.

There never seem to be any plain heroines except Jane Eyre, and she was very unsatisfactory. She should have entered into marriage with her beloved Rochester in the first place. I should have, let there be a dozen mad wives upstairs. But I suppose the author thought she must give her heroine some desirable thing — high moral principles, since she was not beautiful. Some people say beauty is a curse. It may be true, but I’m sure I should not have at all minded being cursed a little. And I know several persons who might well say the same. But, anyway, I wish some one would write a book about a plain, bad heroine so that I might feel in real sympathy with her. — Emily M. Danforth

On our show, we only tell you about books we love. But some stories are so transportive, they're not just recommended, they're life-changing and unforgettable. Here the books that had Mel feeling all kinds of ways.