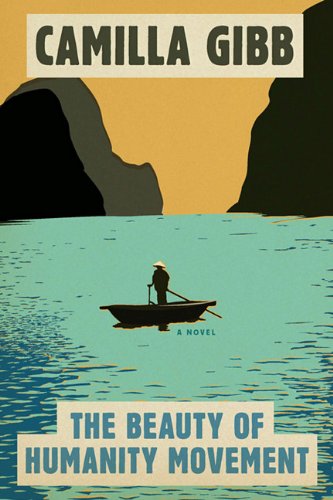 This story of pho and family (320 pages) was published in March of 2011 by Penguin Press. The book takes you to modern Vietnam. Melissa read The Beauty of Humanity Movement and loved it; it wouldn't be on our site if she didn't recommend it.

The Beauty of Humanity Movement

This lovely story of found family features four main characters who will steal your heart: a much-beloved soup maker, his dear young friend, a sassy young woman of Vietnamese-American heritage, and the quintessential Vietnamese comfort food known as pho.

The action begins in 2007 Hanoi, but you can’t understand modern Vietnam without reflecting on the past, so plot threads bind this story to the numerous wars that marked the 20th century.

The beating heart of the novel is Old Man Hung. He’s an adored and respected soup maker, and his pho is legendary. His broth, the noodles, the perfectly-cooked beef; people depend on a bowl of his pho (and the associated news and gossip sharing) to start their day.

But we soon learn that there’s more to Old Man Hung than his magical potion. His present days are taken up with dragging his humble soup cart around Hanoi, searching for a safe location to set up. But back in the day, his soup shop was the meeting place for intellectuals, writers, and artists. And though these dissidents are long gone — they’ve been missing or dead for decades — Hung’s past relationships with them may hold the answer to questions being asked now.

Those questions come in the form of Maggie, a Vietnamese-American art curator eager to solve the mystery of what happened to her artist father, and Tu, a 20-something math genius trying to better understand himself and his country’s history.

This type of story could easily tip over into too twee or sentimental. Instead, it’s a bracing tale about ordinary, extraordinary people — whom you want to get to know — bumbling their way to really knowing themselves and others. It’s a story of perspective and forgiveness, acceptance and hope.

There’s a romance (happily, not the one you might expect) and adventure, the revelation of painful truths, poetry and art, and a recognition of the power of a bowl of pho. It’s more than soup. It’s a representation of everything that’s valued by Hung and the Vietnamese culture: dignity and attention to detail, a connection to the past, the importance of community, and the courage to care for the people around you.

The history of Vietnam lies in this bowl, for it is in Hanoi, the Vietnamese heart, that pho was born, a combination of the rice noodles that predominated after a thousand years of Chinese occupation and the taste for beef the Vietnamese acquired under the French, who turned their cows away from ploughs and into bifteck and pot-au-feu. The name of their national soup is pronounced like this French word for fire, as Hng’s Uncle Chin explained to him long ago. ‘We’re a clever people,’ his uncle had said. ‘We took the best the occupiers had to offer and made it our own. Fish sauce is the key — in matters of soup and well beyond. Even romance, some people say.’ — Camilla Gibb

Pho is Vietnam's national dish, a comforting bowl of spice-infused broth, rice noodles, beef, and fresh herbs that tastes like love. We recommend you simmer a pot of broth and take a virtual trip to Hanoi, Vietnam.