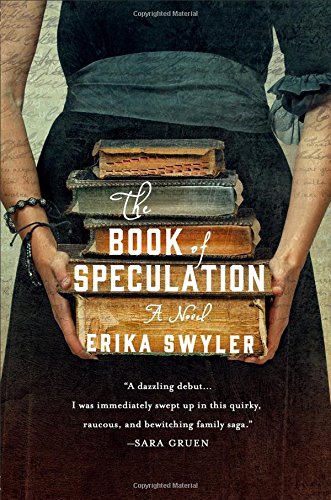 This captivating family saga (352 pages) was published in June of 2015 by St. Martin's Press. The book takes you to a traveling circus. Melissa read The Book of Speculation and loved it; it wouldn't be on our site if she didn't recommend it.

The Book of Speculation

This book probably doesn’t need a hard sell. It includes, in no particular order, two librarians, a tarot card reader, a traveling circus, mermaids, dark secrets, a family curse, and an antiquarian book that plays a pivotal role in the action.

Our hero is Simon, a librarian who lives alone in his family’s crumbling home on a bluff overlooking Long Island Sound. Both of his parents are dead. His much-adored mother was a circus mermaid who performed by holding her breath. But on a fateful day, on the beach just below their house, she drowned. That terrible event was the beginning of the end for his family. Soon, his father had also passed, and his younger sister had run away with a traveling carnival.

One day, a fragile, water-damaged book arrives in the mail. Simon soon learns this mysterious volume, a logbook from a traveling circus of the 1700s, may hold the key to a centuries-old mystery involving the women in this family. Is his family cursed?

The narrative travels back and forth in time, immersing us in the day-to-day lives of the circus performers — and the modern woes of Simon’s precarious situation. He has real-life problems: His house is literally about to fall into the sea, his beloved job at the library is vulnerable to budget cuts, and despite his best intentions, he might be hopelessly in love.

Erika Swyler combines the magical and the mundane in a way that’s irresistible and immersive. The pages of the old book depict a circus that’s simultaneously whimsical and sinister. At the same time, the challenges faced by Simon are all-too-relatable. As he makes peace with the memories of his parents and his very-much-alive sister, he realizes that we’re all shaped by our pasts, but we also control our futures.

Heralded by a glorious voice, a troupe of traveling entertainers arrived. A mismatched collection of jugglers, acrobats, fortune-tellers, contortionists, and animals, the band was presided over by Hermelius H. Peabody, self-proclaimed visionary in entertainment and education, who thought the performers and animals (a counting pig deemed learned, a horse of miniature proportions, and a spitting llama) were instruments for improving minds and fattening his purse. On better days, Peabody fancied himself professorial, on worse days, townsfolk were unreceptive to enlightenment and ran him out of town. The pig wagon, with its freshly painted blue sides proudly declaring the animal’s name, ‘Toby,’ bore scars from unfortunate run-ins with pitchforks. — Erika Swyler