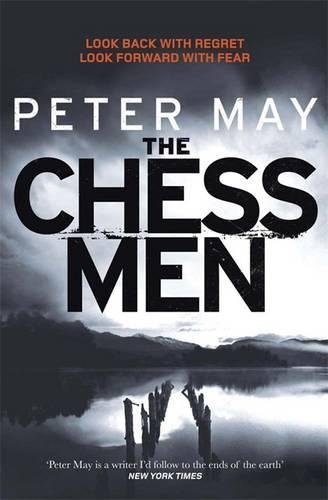 This dark murder mystery novel (400 pages) was published in January of 2016 by Quercus. The book takes you to the Isle of Lewis, off the coast of Scotland. Melissa read The Chessmen and loved it; it wouldn't be on our site if she didn't recommend it.

Ex-cop Fin has returned to his hometown on the Isle of Lewis for a fresh start — but do-overs rarely go as planned. Soon he’s embroiled in a decades-old mystery and dredging up the conflicts and betrayals of his past.

Fin Macleod thought he’d escaped into his new life in Edinburgh. But his hometown island in the Outer Hebrides, just off the northern coast of Scotland, has a pull on him that’s as inexorable as the tide. Now he’s working as a security officer for a local landowner, on the hunt for illegal salmon poachers, and trying to settle back into life on the bleakly beautiful island.

Before too long, Fin discovers that one of the poachers he’s meant to stop is his childhood friend and former bandmate. One night, the two men making a shocking discovery that affects everyone in the close-knit community. Fin is forced to reflect on the people and experiences that connected him to his musician family: the music, the fistfights, the competition for girls, and the irresistible cruelty of the island itself.

The narrative alternates smoothly between present and past to explore loyalty and betrayal, love and friendship, redemption, and how history shapes our lives in ways we can’t control.

The atmosphere is tangible, and this story could only take place on Lewis. Peter May’s prose makes a character of the landscape: the bleak peat bogs, the wind that roars over the cliffs, the dramatic play of light, and the brooding mist of religion that drifts over the island.

Other fascinating and tragic elements in this story: the Lewis Chessmen — a set of hand-carved 12th-century chess pieces found on the beach of the island — and the tale of the HMY Iolaire, an Admiralty ship that ran aground during a terrible storm, just yards from the shore of Lewis, drowning more than 200 men returning from WWI.

This is the third book in The Lewis Trilogy by Peter May. We also recommend The Blackhouse and The Lewis Man.

Fin stepped in to take a closer look. Whistler, apparently, had unexpected talents. It was a beautifully sculpted figure, a minutely-accurate replica, down to the smallest detail. The folds in the bishop’s cloak, the fine lines combed through the hair beneath his mitre… No doubt Whistler could have found employment in the Viking workshops in Trondheim where the actual pieces were thought to have been carved out of walrus ivory and whales’ teeth in the twelfth century. — Peter May