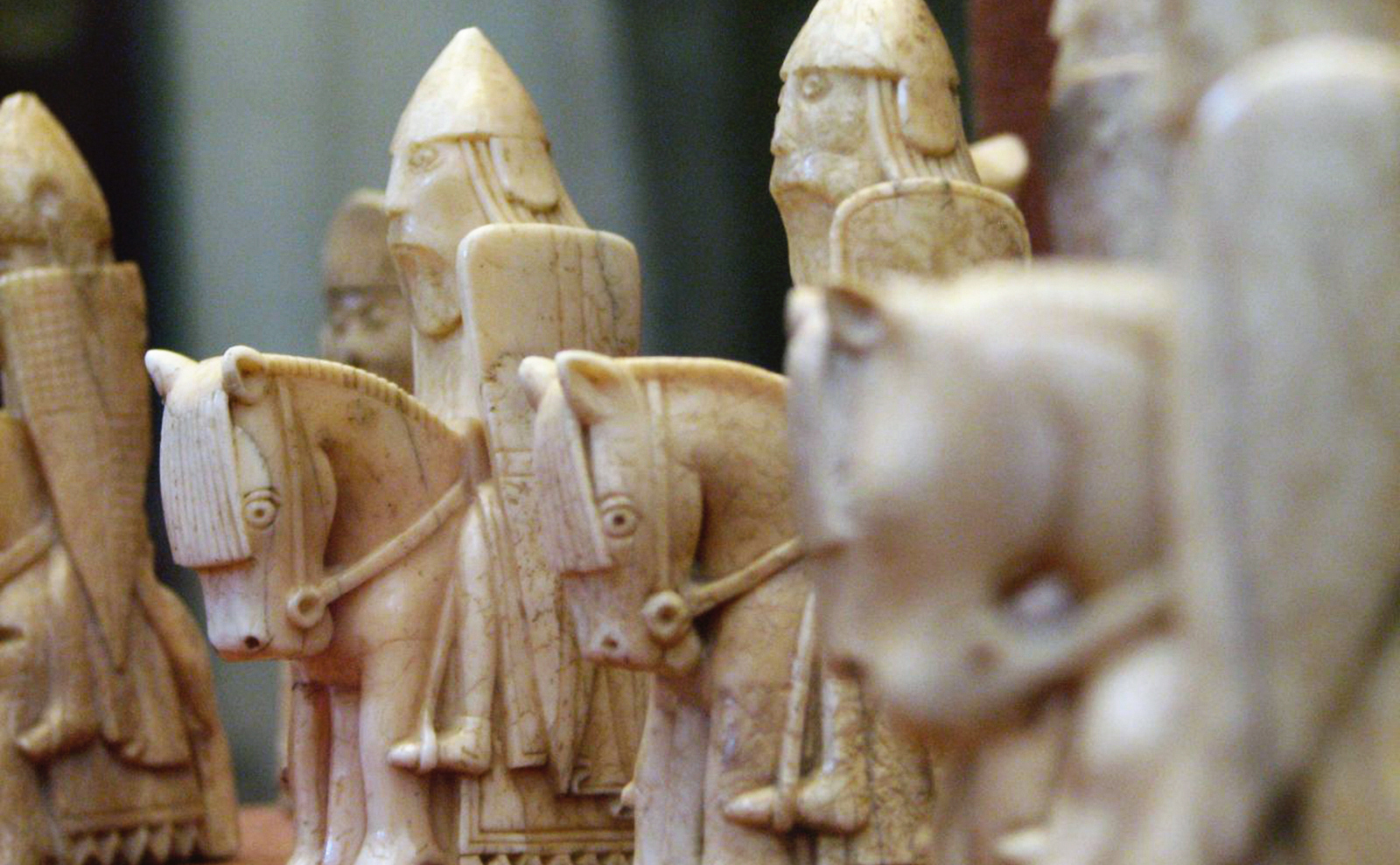 The Lewis Chessmen are 12th-century chess pieces carved from walrus ivory and whale teeth. Their origin story is shrouded in conjecture, slapstick mishaps, academic rivalry, and muuuuuurder. But there is one undisputed fact about them on which you can rely: They are ridiculously cute.

At the far northwest tip of Scotland, you’ll find the Isle of Lewis, a wind-battered island in the Outer Hebrides. It’s a bleakly beautiful spot — craggy rock, the greenest grass, hard blue sky, jagged coast. The comforting mass of the mainland sits to its east and nothing but the deep, cold Atlantic lies for 614 miles between it and Iceland to the northwest.

On this rugged outpost, sometime before 11 April 1831 — the exact date is lost to time — a local man named Malcolm ‘Sprot’ MacLeod found a treasure trove buried in the sand: 93 hand-carved chess pieces, including kings and queens on elaborate thrones, bishops, knights on horseback, warders, berserkers, and obelisk-shaped pawns.

How did the chessmen come to be on the beach?

Sometime in the 1600s, so the legend says, a young sailor was aboard a ship at anchor off the coast of the Isle of Lewis. He absconded with a mysterious bundle, and his thievery was witnessed by a gillie, the native term for a Scottish man who assists on hunting and fishing expeditions. The gillie approached the sailor under the guise of friendship, then murdered him, stole his treasure, and buried it in the dunes. The reasons why are unknown, but the guilty gillie never made it back, and the chessmen remained buried until MacLeod came onto the scene. 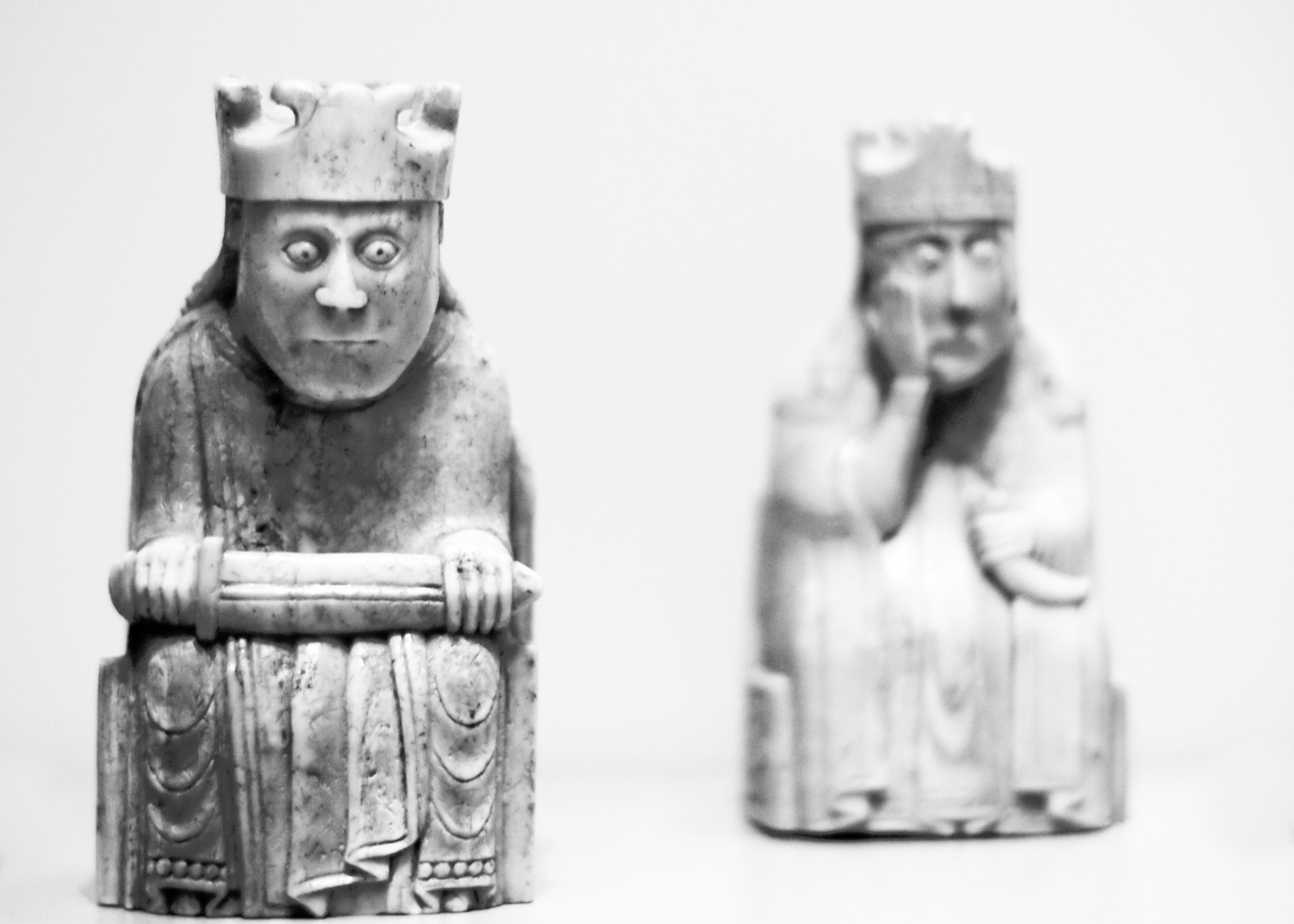 In one version of the tale, Sprot was on a ramble, looking for an errant cow, and mistook the pieces for mischievous elves. He quickly bolted in fear, only to return later at the urging of his wiser, and perhaps, more business-minded wife. Another report places the chessmen in an abandoned nunnery: the ruins of the House of Black Women.

Without a written record, their exact origin will likely remain enshrouded in mist and myth. What’s known for sure is that collectors immediately fell under the spell of these rare objects. According to the 29 June 1831 edition of The Scotsman newspaper, 11 of the mysterious pieces were sold to an Edinburgh collector and a dealer — one Mr. J.A. Forrest, watchmaker, jeweler, and medalist — had acquired the remaining 82. Now the chessmen are on display at the National Museum of Scotland and the British Museum.

Who carved these little cuties?

The generally accepted theory is that the Lewis Chessmen were carved in Trondheim, Norway, and then made their way to Lewis, perhaps on a merchant ship sailing from Scandinavia to the Norse settlements on the coast of Ireland.

But according to the book Ivory Vikings: The Mystery of the Most Famous Chessmen in the World and the Woman Who Made Them by Nancy Marie Brown, the chessmen could have been carved in Iceland. By a woman! Named Margret the Adroit, she was the wife of a priest and was considered ‘the most skilled carver in all Iceland.’

In 2011, British and Icelandic archaeologists got into an academic throw-down over these competing theories at a conference in Reykjavik — but neither the British Museum nor the National Museum of Scotland supports the Iceland theory.

Given that we’re all about Scotland on our Instagram and blog this week, and 11 of the Lewis Chessmen currently reside in Scotland, here are…

1. Walrus tusks were precious in the 12th century.

The walrus ivory used to carve the Lewis Chessmen was most likely imported from Greenland. At the time, the tusks were known as ‘Arctic gold’ because they were so coveted and available only to the wealthy.

The pieces range in height from just under three to four inches, and their proportions are a bit squatter than real humans, providing a solid base and a cuddly appearance. Their faces are delicately carved and convey a range of emotions. It’s easy to anthropomorphize them, making up stories about the things they’ve been thinking over the centuries. Bend down to look them in the eye, and you’d swear they were about to speak. The kings and queens sit on thrones carved with intricate designs, and they wear crowns of various shapes. All of the pieces wear robes or uniforms that fall in softly-draping folds to the floor. They’re as warm and life-like as full-size marble statues that have been shrunk to dollhouse size.

3. The queens are very expressive.

The set includes eight queens, and all of them share the same gesture: They sit on their thrones with their right hands pressed to their right cheeks. Even experts can’t agree on what the queens’ expression conveys: despair, patience, grief, disapproval, surprise, or consideration. Perhaps it’s simple wonderment at the folly of humans. All of her majesties wear their hair in long braids, covered by a veil and topped with a crown.

4. The kings have braids, too!

Not to be outdone by their partners, the somewhat stoic kings also have elaborately braided hair and full beards that soften their expressions. The swords they clasp in their laps — symbols of strength and fortitude — are held in their right hands. No devil-spawn lefties here!

5. The rooks are not bonkers, they’re berserkers.

The comical little guys with the big shields and wild eyes are rooks, in the form of berserkers: fierce Viking warriors that served the god Odin. The berserkers were the first to attack in a battle, and they fought in a violent frenzy, howling like mad dogs and becoming so intoxicated by battle-lust, they bit their shields.

6. The horses are accurately tiny.

The somewhat silly-looking steeds ridden by the knights are more tiny than mighty. But they’re legit. In the 12th century, horses were short and stocky; riders’ legs often dangled well below their horses’ bellies. These pony-ish horses were strong and agile — and also: adorable. The knights, too, are true-to-life; their armor and shields are exact replicas of true Norwegian warriors of the time.

7. The bishops are a time-stamp.

All 16 of the clergymen hold ceremonial crooks and wear their pointed hats — called miters — in the ‘modern’ style: that is, the points are at the front and back, rather than left and right. Before 1150, real-life bishops wore their miters with the points on the side, which looked incongruously like devil horns. This idiosyncrasy of style helped archaeologists determine when the Lewis chessmen were carved.

8. We’re not the only ones that think these chessmen are magical.

The Lewis Chessmen make frequent appearances in pop culture. We featured the first book in the Blackhouse trilogy by Peter May on [Instagram] (https://www.instagram.com/strongsenseof) this week. The final book in the series is called The Chessmen, and its plot centers on a character who hand-carves replicas of the chessmen from driftwood. The Lewis Chessmen are also key to the plot of the YA fantasy novel The Sleeping Army, as well as the UK animated TV series Noggin the Nog.

In the Disney-Pixar movie Brave, the queen demonstrates the chaos and horror of war to her daughter Merida with the Lewis chessmen, and in Hary Potter and The Sorcerer’s Stone, Harry and Ron play wizard chess:

In July 2019, Sotheby’s auctioned off a warder that had been purchased by an antiques dealer in 1964 for £5 and passed down in the family for decades. It was the first time that a ‘new’ chessman had ever come up for auction. The bidding opened at £480,000 and, with the commission, eventually cost the anonymous buyer £735,000. This hype video for the auction is all kinds of dramatic and thrilling:

Should you find yourself smitten with a miniature berserker or queen, you can shop the National Museum of Scotland online to add a replica to your collection for far less.

10. Some of the pieces were originally red.

Back in the day, chess sets were red and white. Although all of the Lewis pieces are white today, several of the original pieces were stained red. As the years passed, the pigment faded from the walrus ivory, but replica sets sport the original colors.

Irving Finkel is a curator at the British Museum with an emotional connection to the Lewis Chessmen. In this blog post, he explains why they’re archaeologically important and their special meaning to him. The video below is eight minutes of joy.

The Lewis Chessmen are squeal-inducingly cute in person. The ivory seems to emit a gentle glow, and the features of their tiny faces convey comical and robust emotions. If you can get within eyesight of the pieces in person, we highly recommend it. The British Museum in London has 82 of them on display, and the remaining 11 are at the National Museum of Scotland in Edinburgh. Both museums offer well-curated gift shops with Lewis Chessmen replicas for sale.

For hours and other visiting info, see the National Museum of Scotland website.

For hours and other visiting info, see The British Museum website.