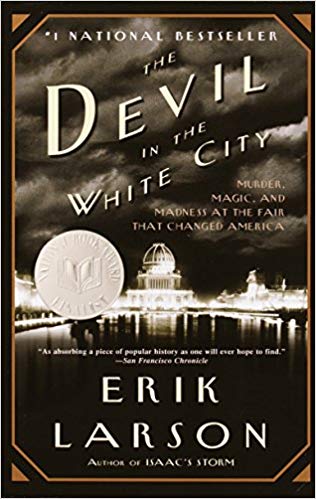 This narrative history (447 pages) was published in February of 2003 by Crown. The book takes you to turn-of-the-century Chicago. Melissa read The Devil In The White City and loved it; it wouldn't be on our site if she didn't recommend it.

The Devil In The White City

Murder, Magic, and Madness at the Fair that Changed America

It was to be an extravaganza like the world had never seen: the 1893 Columbian Exposition, a.k.a., the Chicago’s World’s Fair. Marvels from all over the globe would be on display in a sparkling White City designed to burnish Chicago’s reputation and establish it as the country’s premier place to be.

But on the way to opening day on 1 May 1893, the fates of two men became irrevocably linked: Daniel H. Burnham, the visionary, ambitious architect behind the Fair’s construction; and H.H. Holmes, America’s first serial killer.

In this gripping narrative — you’ll need to keep reminding yourself it’s nonfiction — Erik Larson has built a time machine that will whisk you back to those heady turn-of-the-century days. By weaving the stories of these two remarkable characters, the entire scope of the Fair is revealed: its optimism, innovation, spectacle, and the high stakes involved in its success.

The Fair featured 200 new (but temporary) neoclassical buildings, canals, and lagoons; the exhibits were drawn from 46 countries around the world. It was a high-profile stage for American firsts: the first amusement park, the first midway, the first commercial movie theater, and the introduction of belly dancing to America. During its 6-month run, more than 27 million people entered its gates.

Attendees marveled at exciting new inventions, including the automatic dishwasher, Pabst Blue Ribbon beer, hot dogs, Cracker Jack, and Aunt Jemima’s pancake mix. Buffalo Bill Cody was there to put on his show, and inventors Thomas Edison, Alexander Graham Bell, and George Ferris were there, too; Ferris’ majestic wheel reached 264 feet (80.4 m) into the sky. Walking among the exhibits, you might have seen Harry Houdini and Florenz Ziegfeld of Ziegfeld Follies, Scott Joplin and John Philips Sousa and Antonin Dvorak.

But among all of those notable names from history, the most infamous must surely be H.H. Holmes, the dark shadow that threatened to douse the bright light of Burnham’s vision. With an unerring eye for just the right details, Erik Larson brings both men vividly to life in this unforgettable story of ambition, crime, and American ingenuity.

Chicago’s population had topped one million for the first time, making the city the second most populous in the nation after New York, although disgruntled residents of Philadelphia, previously in second place, were quick to point out that Chicago had cheated by annexing large expanses of land just in time for the 1890 decadal census. Chicago shrugged the sniping off. Big was big. Success today would dispel at last the eastern perception that Chicago was nothing more than a greedy, hog-slaughtering backwater; failure would bring humiliation from which the city would not soon recover, given how heartily its leading men had boasted that Chicago would prevail. It was this big talk, not the persistent southwesterly breeze, that had prompted New York editor Charles Anderson Dana to nickname Chicago ‘the Windy City.’ — Erik Larson

Treat yourself to a recipe for homemade Chicago-style hot dogs! It's an all-beef dog 'dragged through the garden' with colorful toppings for a taste explosion, inspired by Erik Larson's brilliant romp through history.