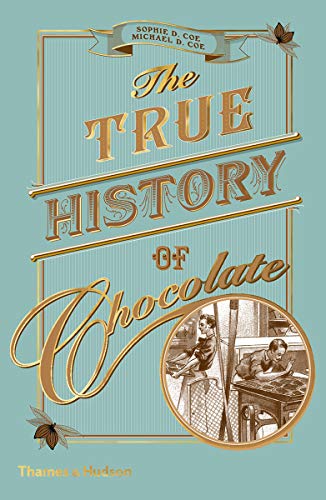 This delicious look at chocolate (280 pages) was published in February of 2019 by Thames and Hudson. The book takes you to Mexico. David read The True History of Chocolate and loved it; it wouldn't be on our site if he didn't recommend it.

The True History of Chocolate

The delightful and detailed book The True History of Chocolate spans 3000 years of chocolate history. The humble chocolate bean has been the source of conspiracies, the downfall of enemies, a bargaining chip in trade wars, and valuable currency. But mostly, it’s been delicious.

We have the pre-Columbian Meso-America people to thank for chocolate, and we say with all exuberance and sincerity, Muchos gracias, Mexico and Central America! The story of chocolate begins about 3000 years ago. The winding — and well-researched — tale includes elements of archaeology, botany, and socio-economics, as well as good taste.

From Aztecs and Maya to Spaniards and English pirates, everyone wanted to get their hands on cacao beans. Chocolate started not like the sweet treat we know today, but as a mildly bitter drink — served cold — that gained a reputation as an aphrodisiac, a stimulant, and even medicine. When the invading conquistadors took chocolate back to Spain, it was transformed into a hot beverage, probably enjoyed by Queen Isabella herself.

Until the 18th century, chocolate was only consumed as a beverage. But in 1876, chocolatiers in Europe added butter and sugar to the cocoa powder and milk to creat solid chocolates. All hail to these geniuses!

The beginning of modern chocolate coincides with the industrial revolution, thanks in no small part to mass production techniques. And no one mastered this approach better than Milton Hershey. A chocolate tour would be incomplete without a visit to his chocolate town in Pennsylvania Dutch country. Should the spirits of Hershey, John Cadbury, Henri Nestle, and Jean Tobler move you, there’s also a tasty bit in the book about how to make chocolate yourself.

The story of how this book came to be is itself a bit of a romance. Food historian Sophie Coe (Ph.D. in anthropology from Harvard) had just written America’s First Cuisines when she became determined to write the definitive history of chocolate. Her research took her to an archive in Rome. While studying a 400-year old book, she fell ill — and eventually learned she had terminal cancer. Her husband, a Yale anthropology professor, vowed to finish the book in her stead. In his introduction, he wrote, ‘I have learned much from Sophie, even posthumously, while writing this history. Although I could never hope to duplicate the wry and ironic humor that enlivens her previous book, I hope that something of her wit and scholarship can be found in this one.’

The resulting book is a sweet labor of love and a compelling look at how chocolate makes the long voyage from a tree near the equator to your neighborhood mini-mart. Delicious, indeed.

We now realize that the Spanish invaders derived their earliest real knowledge of cacao, and the very word ‘cacao,’ not from the Aztecs but from the Maya of the Yucatán Peninsula and neighboring Central America. Even further, exciting research carried out in the past two decades has shown that these same Maya, a thousand years before the Spaniards landed on their shores, were writing this same word on magnificent pottery vessels used in the preparation of chocolate for their rulers and nobility. Indeed, it is this selfsame word ‘cacao’ that provides the clue leading us back still further into the mists of New World prehistory — to the people who may well have been the first to turn cacao beans into chocolate. — Sophie D. Coe, Michael D. Coe