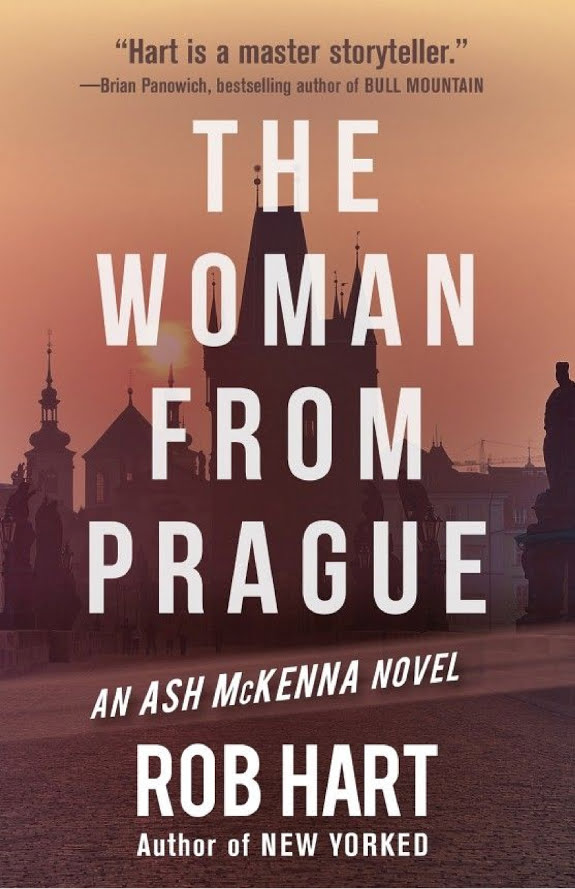 This suspense thriller (304 pages) was published in July of 2017 by Polis Books. The book takes you to contemporary Prague. read The Woman From Prague and loved it; it wouldn't be on our site if didn't recommend it.

The Woman From Prague

This is the fourth book in the Ash McKenna series, and the good news is that you can read this one as a stand-alone thriller. It’s non-stop action from start to finish.

Ash is an amateur detective from New York. He’s exiled himself to Prague for a few months to escape the repercussions of previous misadventures in the States. Although he’s been lying low in the Czech capital, sticky situations follow him like his shadow.

A stranger named Roman materializes and blackmails Ash by threatening his mother. It should be a simple covert opp: All he has to do is intercept a package that’s going to be handed-off on the Charles Bridge. What could possibly go wrong?!

But he’s in an unfamiliar city and unsure who he can trust — which, honestly, is not so unusual for Ash. Soon he’s going toe-to-toe with an enigmatic woman named Samantha, a total badass who can hold her own with anyone. Then he has a throw-down with an assassin that almost spells Ash’s permanent end.

It’s a riveting romp with double-crosses, a satisfying wrap-up, descriptions of Prague that transport right to the city, and a hero who finds that whenever he tries to do the right thing, he ends up in way over his head. But he keeps trying anyway.

‘That the world is a scary place,’ Alsky says. ‘And sometimes we need reassurances that monsters can be defeated.’ — Rob Hart

Every Friday, we share our favorite book- and travel-related links. This week, we've got the fun of biphasic sleep, famous letterhead, the joy of travel disasters, food grammar, 19th-century street style, and more.