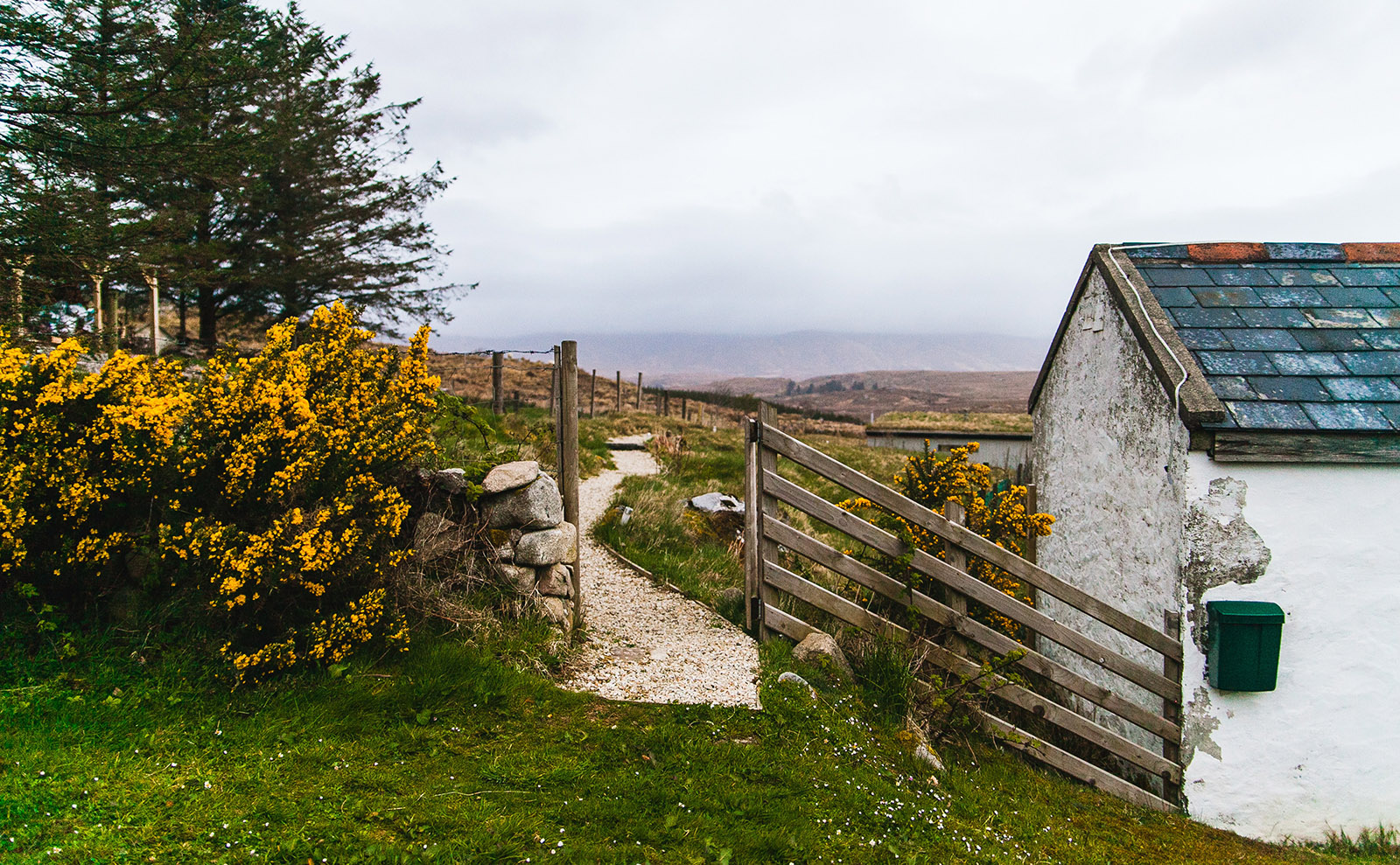 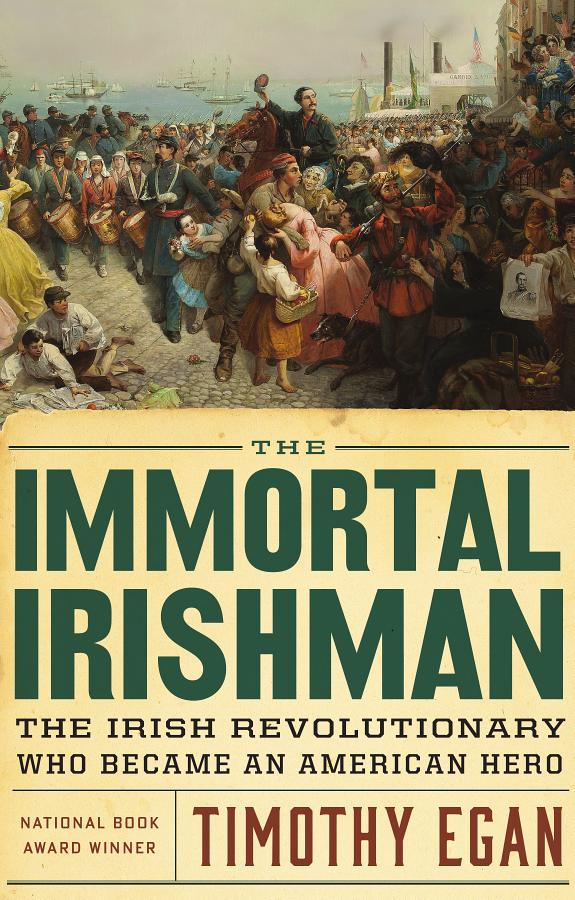 This biography of Irishman Thomas Francis Meagher is a ride. Meagher was a regular fella — idealist, romantic, and a bit of a troublemaker — who developed a well-justified (potato) chip on his shoulder that drove him out into the world. Author Timothy Egan takes us on the grand adventure of Meagher’s life in Ireland and the US.

The story opens with a visceral description of England’s rules for their Irish brethren until the 20th century: no Irish folk songs, no vote, no education, no harp playing, and no Irish language. Catholocism was sternly frowned upon. ‘What had the Irish done to deserve these cruelties?’ Egan writes. ‘They had refused to become English.’

Granted, that might seem pretty grim, but this lovingly researched book is not. It’s an animated tale about an adventurer with a broad streak of decency. Meagher might have lived out his life in peace on the Emerald Isle had the English not tied his hands and taken the potatoes from his plate.

To honor the ‘go big or go home’ legacy of Thomas Francis Meagher, we’re sharing this most humble and wholly traditional recipe for boxty, an honest, no-frills approach to the potato pancake.

Boxty originated in Ireland sometime in the late 18th century, primarily in the northern counties of Cavan and Donegal. Now they’re eaten all over Ireland, usually alongside meat or stew.

Although variations exist, the basic recipe is simple: mashed potatoes and grated potatoes, flour, a leavening agent, and a bit of milk. The result is a pancake that’s a bit bready, quite tender in the middle, and crisp around the edges. And buttery! Boxties must be buttery.

Boxties can be cooked in a skillet or baked in the oven, and we’ve included instructions for both so you can choose your pleasure.

Cook some potatoes. Fill a medium saucepan halfway with water; season generously with salt and bring to a boil over high heat. Peel half the potatoes, then cut them into 1-inch cubes, placing the cubes into the water as you go. When the water boils, continue to cook until potatoes are soft, about 10 to 15 minutes.

Grate some potatoes. While the diced potatoes boil, peel the remaining potatoes, then grate them coarsely using a box grater or food processor. Place the grated potatoes in a large bowl and season with 2 teaspoons salt and the black pepper. Toss to coat, then transfer the potatoes to a clean, dry kitchen towel. Squeeze the potatoes over a sink to remove the excess liquid, then transfer the shreds back to the bowl.

Blend the potatoes. When the diced potatoes are soft, transfer them to a colander to strain, then add them to the bowl with the shredded potatoes. Mash the chunks until they’re creamy and mixed with the shreds.

Make the dough. Pour the milk on top of the warm potato mixture and stir briefly just to combine. Add the flour and baking powder and stir until mixed well.

Cook the boxties: On the stove. In a large skillet, heat 1-2 tablespoons butter over medium heat, 3 minutes. Working in batches, scoop 1/3 cup of the dough into the pan and flatten to form 3- to 4-inch-wide pancakes — leave at least 1 inch of space between them. Cook until well browned on both sides, 4 to 5 minutes per side. Repeat with the remaining batter and add more butter between batches, as needed. These are mostly tender with little crispy bits.

Cook the boxties: In the oven. Heat the oven to 400F/205C. Melt 2 tablespoons butter in a small pan over medium-high heat. Line a baking sheet with parchment paper and brush the paper with melted butter. Scoop 1/3 cup of the dough into the sheet and flatten to form 3- to 4-inch-wide pancakes — leave at least 1 inch of space between them. Brush the tops of the cakes with melted butter. Bake for 20-25 minutes, until well browned and crisp. These are slightly drier but still tender in the middle and quite crispy on the edges.

For the better part of seven centuries, to be Irish in Ireland was to live in a land not your own. You called a lake next to your family home by one name, and the occupiers gave it another. You knew a town had been built by the hands of your ancestors, the quarry of origin for the stones pressed into those streets, and you were forbidden from inhabiting it. You could not enter a court of law as anything but a criminal or a snitch. You could not worship your God, in a church open to the public, without risking prison or public flogging. You could not attend school, at any level, even at home. And if your parents sent you out of the country to be educated, you could not return. You could not marry, conduct trade or go into business with a Christian Protestant. You could not have a foster child. If orphaned, you were forced into a home full of people who rejected your faith. You could not play your favorite sports — hurling was specifically prohibited. You could not own land in more than 80 percent of your country; the bogs, barrens and highlands were your haunts. You could not own a horse worth more than five pounds sterling. If you married an Englishman, you would lose everything upon his death. You could not speak your language outside your home. You would not think in Irish, so the logic went, if you were not allowed to speak in Irish. — Timothy Egan

Get ready for a raucous romp through history with one of the most colorful and remarkable Irishmen of the 19th century. Meet Thomas Francis Meagher, an unforgettable character who also possessed a great deal of character. Meagher’s middle name should have been ‘adventure’ because his real-life escapades read like a novel. Egan takes us along on Meagher’s exploits, so we experience the breadth of the Irishman’s life and influence, both in his native land and his adopted home of the US. Detailed, entertaining, and inspiring, this 200-year-old story feels both intimate and fresh. {more}

This rollicking history (384 pages) was published in March of 2016 by Houghton Mifflin Harcourt. The book takes you to 19th-century Ireland. David read The Immortal Irishman and loved it; it wouldn't be on our site if he didn't recommend it.

We've got the makings of a cozy evening for you: a collection of atmospheric stories to transport you to western Ireland, a comforting bowl of Irish Stew, and a hot-from-the-oven slab of Irish Soda Bread with butter.

16 Instagram Accounts That Celebrate the Magic and Mystery of Ireland

Ireland is green and lush and craggy and altogether beautiful. We've collected 16 Instagrammers — photographers, artists, chefs, and other creators — to whisk you away to that lovely island in the North Atlantic.