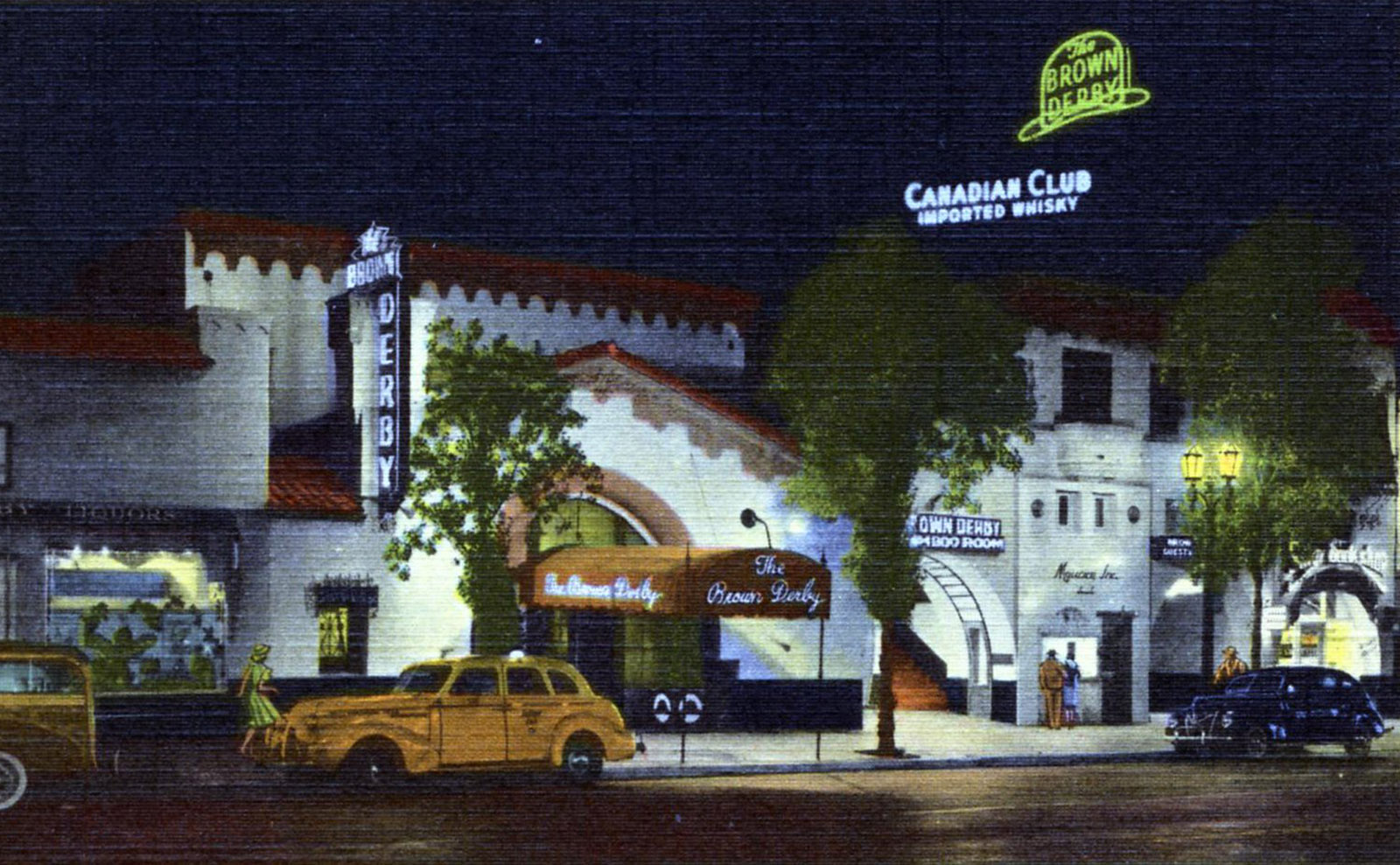 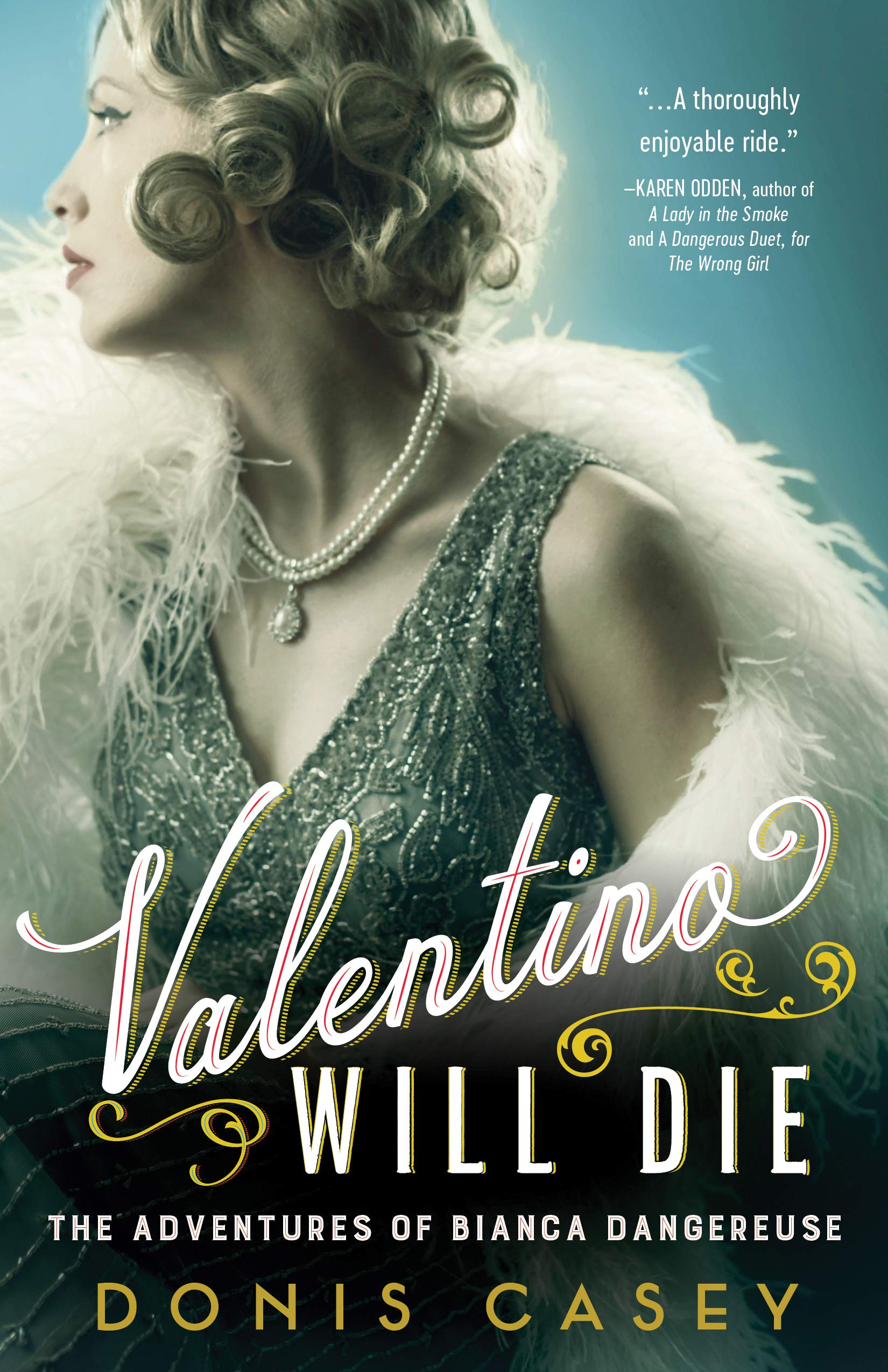 Charismatic movie stars. Powerful moguls. Cocktails, cigarettes, gossip, and good grub. In the Golden Age of Hollywood, you could find it all at The Brown Derby.

The Brown Derby opened on Valentine’s Day, 1929, and it soon became the place to see, be seen, and broker deals. Its proximity to the movie studios made it a comfortable hangout for stars and journalists. The restaurant was the first to offer table-side telephone service — the number of calls an industry mogul received during his meal was a measure of his power in Tinseltown.

Infamous gossip columnists like Louella Parsons and Hedda Hopper made the Brown Derby their unofficial offices. Its tables sported low-backed booths, making it all the easier to see who was out and about, as well as who was nuzzling whom and which starlet’s drink was thrown in a leading man’s face. Despite the risk of exposure (or maybe because of it), the studio stars felt at home there; many even received fan mail addressed simply to ‘The Brown Derby, Hollywood and Vine.’ The Derby’s place in Hollywood lore was clinched when Clark Cable proposed to Carole Lombard there. She accepted, natch.

As we learn in the glamorous murder mystery Valentino Will Die, Rudolph Valentino did indeed pass (under somewhat mysterious circumstances) in 1926, so he never held court at The Brown Derby. But if his friend, actress, and amateur sleuth Bianca LeBelle were a real person, she definitely would have dined there — flirting and gossiping with the other Hollywood stars and probably enjoying a Cobb.

One late night in 1937, the Derby’s owner Robert Cobb was peckish. He and his pal Sid Grauman (of Grauman’s Chinese Theatre fame) grabbed leftover ingredients from the restaurant’s massive refrigerator: salad greens, an avocado, blue cheese, cold chicken breast, a hard-boiled egg. According to legend, the bacon they added to their contraband was ‘swiped from a busy chef.’ Grauman had recently visited the dentist and wasn’t chewing as well as he might, so they chopped everything into bite-size pieces before tossing the ingredients with a French vinaigrette. Unceremoniously and unintentionally, the Cobb Salad was born.

The gentlemen’s midnight creation was so tasty that Sid Grauman requested a ‘Cobb Salad’ from his waiter when he arrived the next day, and it was eventually added to the menu. The salad was beloved by the Derby’s customers: Jack Warner of Warner Brothers Studios regularly sent his chauffeur to the restaurant to pick up a take-away Cobb for him. By the time The Brown Derby closed in 1985, it had served about 4 million of the iconic salads.

While its notoriety grew in Hollywood, the salad also became popular across America. The country was just coming out of the Great Depression. Despite its Hollywood origins, the ingredients in the Cobb Salad were easily found down home on the farm: fresh produce, chicken, eggs, and bacon.

Our version combines iceberg lettuce with baby spinach, but you can also swap in watercress, spring mix, Romaine lettuce, or endive. The chicken is quickly roasted in the oven, but you could also throw the seasoned chicken breasts on the grill instead. Finally, we replace the bleu cheese of the original with black olives to add a similar briny tang without the dairy. But to be authentic, feel free to channel the spirit of Robert Cobb and add bleu cheese to your heart’s content.

The Cobb Salad is traditionally served untossed and undressed. The idea was to dazzle celebrity diners with an elegantly composed plate they could drizzle with dressing themselves. If you’re up for it, you can make a pretty presentation at home — or you can do what we do when there are no paparazzi around: toss everything into a big bowl with dressing and grab a fork.

And now, an easy way to remember all of the ingredients: EAT COBB.

Prep the egg pot. Place 4 cups water in a medium saucepan, cover the pan, and bring the water to a rolling boil.

Cook the bacon. Cut the bacon crosswise into 1/4-inch-wide pieces. Place the chopped bacon in a large, cold nonstick skillet, turn the heat to medium-high, and fry the bacon until it’s crisp, about 3–4 minutes. Meanwhile…

Prep the chicken. While the bacon cooks, combine the chives, salt, tarragon, pepper, and garlic powder in a small bowl. Place the chicken between two pieces of plastic wrap and, using the smooth side of the meat hammer, pound the chicken to 1/2-inch thickness.

Cook the chicken. Remove the pan from the heat and transfer the bacon with a slotted spoon to a paper towel-lined plate. Remove all but 1–2 teaspoons of the fat from the pan. Reheat the pan over medium-high heat. While it heats, sprinkle the spice blend on both sides of the chicken. Cook the chicken, undisturbed, 5 minutes. Flip the chicken and cook, 2 minutes. Add the water to the pan, cover with a lid, reduce the heat to medium, and cook undisturbed while making the rest of the salad.

Boil the eggs. When the water boils, use a spoon to lower the eggs one at a time into the boiling water. Cover the pan, reduce the heat to low, and simmer for 9 minutes. SET A TIMER!

Make the dressing. Smash and peel the garlic clove and place it in a pint-size Mason jar. Add the egg yolk, 2 tablespoons of the olive oil, the vinegar, lemon juice, mustard, chives, tarragon, salt, and pepper to the jar. Whirl with a stick blender until puréed. With the blender running inside the jar, add the remaining 1/2 cup oil and blend until smooth. (No stick blender: Plop everything in a standard blender or food processor.)

Prep the vegetables. Thinly slice the lettuce and onion. Halve the olives. Dice the tomato and avocado.

Chill the eggs and check the chicken. Fill a large bowl with lots of ice and cold water. When the timer rings, remove the eggs from the pot with a spoon and lower them into the ice bath. Let them chill out for 5 minutes. Poke a chicken breast with a fork, if the juices run clear, it’s cooked, and you can turn off the heat. If the juices are pink, let it continue to cook while you prep the salad.

Make the salad. Peel and slice the eggs. Divide the veggies among individual plates. Slice the chicken crosswise. Top the greens with chicken and egg, then drizzle with the dressing.

Oliver was riveted by the scene. It took him a moment to realize that Bianca had dropped down beside him from the walkway above. She was in her stocking feet, and as she crouched down, the slit in her skirt parted, baring one leg all the way up to her garter, from the top of which glinted the handle of a small Browning pistol. She slipped Fairbanks’s knife out of her décolletage and cut through the cord that bound Oliver’s hands. Oliver was in danger of his life, and all he could think about was that Bianca was armed to the teeth in the sexiest possible way. — Donis Casey

Travel back to 1926 Hollywood with real-life silent film star Rudolph Valentino and a fictitious actress Bianca LaBelle. It’s a glamorous mystery-thriller set among the movie sets, mansions, and mobsters of Tinseltown. Our heroine Bianca and Rudy are best friends, starring in their first film together. It’s all swell, until one night, Rudy confesses that he’s been receiving death threats and fears for his life. Bianca swears that she’ll find out who’s behind this nasty plot. And that’s where the adventure begins. {more}

This glitzy murder mystery (208 pages) was published in February of 2021 by Poisoned Pen Press. The book takes you to 1926 Hollywood. Melissa read Valentino Will Die and loved it; it wouldn't be on our site if she didn't recommend it.

9 Creative Instagram Accounts That Celebrate the Movie Magic of Hollywood

While we might argue that the book is almost always better, we also love movies — and we love to get the inside scoop on how creative people do their work. These Instagram accounts go behind-the-scenes of movie magic.