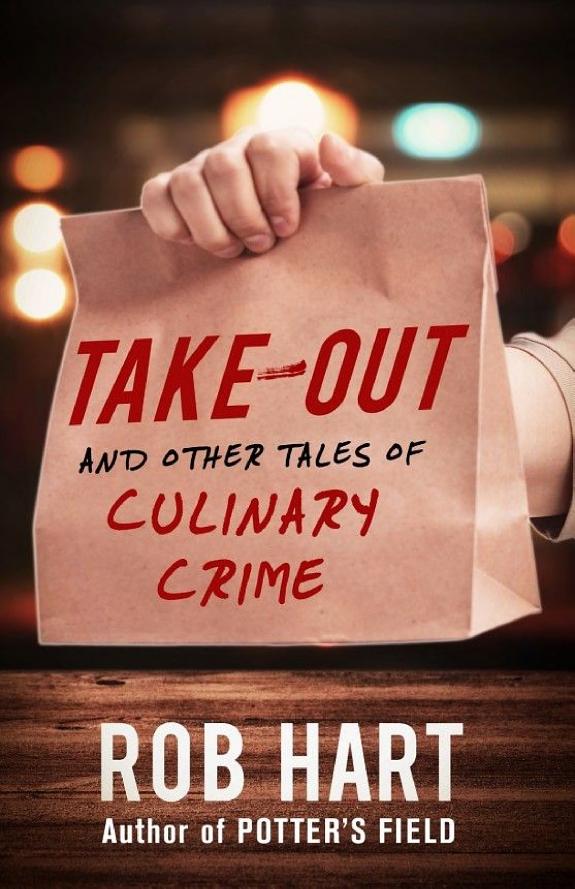 This crime story collection (304 pages) was published in January of 2019 by Polis Books. The book takes you to the underworld of eating. Melissa read Take-Out and loved it; it wouldn't be on our site if she didn't recommend it.

And Other Tales of Culinary Crime

Fair warning: Grab some snacks. This collection of 16 deliciously suspenseful culinary crime stories will ignite your imagination and your appetite.

Author Rob Hart knows his way around the darker alleys of the human psyche. He’s best known for his Ash McKenna detective series and the chilling (and wildly entertaining) near-future dystopian thriller The Warehouse.

In these stories, he further explores the intersection of human foibles, illicit motives, and humor — while also serving up plenty of tempting plates of grub. Each installment is a sharply detailed, bite-sized world, like a novel that’s been simmered and reduced just right. The characters are multifaceted, the settings are vividly rendered, the atmosphere is thick with aromas and smoke and deception. Hart’s prose is descriptive without drawing undue attention to itself. Water from an outdoor spigot tastes like ‘old loose change’ and ‘The silence in the car is like an echo, constantly reminding him it’s there.’

Our favorite story ‘Have you eaten?’ is a slightly sinister celebration of street food in Singapore’s Chinatown. In it, our hero waxes poetic about his favorite eats at hole-in-the-wall joints around the world while tucking into char kway teow (‘…rice noodles and Chinese sausage and blood cockles. There were crisp cubes of pork lard, too…) and [Hainanese chicken rice](hainanese_chicken_take_out (‘…boiled chicken, served with a sauce, then the rice is cooked in ginger and chicken fat’).

We also loved ‘Creampuff,’ a surprisingly sweet character study of a gentle giant — the Creampuff of the title — who is tall, black, tattooed, and maintains order at the suddenly-trendy Patiserie bakery in New York’s East Village. He’s a bakery bouncer, and he monitors the of eager foodies who wait their turn for Patiserie’s famous canelés pastries: ‘… cooked in a copper mold, which forms a deep bronze crust outside. Inside is light custard flavored with vanilla and rum. They’re the perfect little mouthful, barely bigger than one bite…’ One morning, Creampuff meets an undeserved end.

In the title story, a gambler makes suspicious deliveries to work off his debt to a Chinatown gambling parlor; just what is in those white take-out boxes, anyway? ‘How to Make the Perfect New York Bagel’ is a snapshot of shakedowns, enduring friendship, and the savory satisfaction of well-timed payback. There’s also a wry look at the dangers of modern dating, a gleeful skewering of pretentious foodies, a hot-pepper-spiked homage to Agatha Christie, and a prison break story that tackles hunger and philosophy with equal aplomb.